While Williams might not have been in the running for a race win in Budapest, they did once again show they have little competition on pit lane.

And it was the team's last-minute stand-in driver Paul di Resta who took top honours. The team completed his pit stop in a blistering 2.29s. That was despite di Resta being in the 2017-spec FW40 for the first time in Saturday's qualifying.

"I stopped in the box at the end of [qualifying] and they said ‘Yes, you stopped on your marks’,” the Scot reported on Saturday evening. "'But there's going to be about 16 people there tomorrow to try to get your way around!'"

Despite that success, the Scot failed to make it to the chequered flag. An oil leak forced him to retire a few laps before the finish.

Di Resta's stop was just four hundredths of a second faster than the team managed for his team mate, regular driver Lance Stroll.

Toro Rosso's Daniil Kvyat was third fastest. His stop of 2.44s put him ahead of Mercedes' Lewis Hamilton and Ferrari's Kimi Raikkonen. Kvyat's team mate Carlos Sainz was sixth fastest with a time of 2.76s.

21 pit stops were undertaken in total, with seven completed in under three seconds. However, Haas' pit stop of 2.96s for Romain Grosjean was blighted by a cross-threaded left-rear wheel which forced him to pull over and retire.

Despite extremely high track surface temperatures of more than 50°C, it was a primarily one-stop race for almost all the teams. Only the two Sauber Pascal Wehrlein and Marcus Ericsson made a second stop.

A safety car for Daniel Ricciardo's early retirement after a collision with team mate Max Verstappen helped preserve the supersoft tyres selected by most teams for the start.

Unsurprisingly, Verstappen's stop was the slowest of anyone on Sunday. He was in the pits for 13.74s while the team checked over the RB13 for collision damage.

Renault's Nico Hulkenberg also had a lengthy stay in pit lane timed at 12.74s. Stoffel Vandoorne was stationary in the McLaren pit box for a longer spell of 9.21s.

Overall, Williams are well ahead of Mercedes and Williams in DHL's season-long competition for the fastest pit stops. 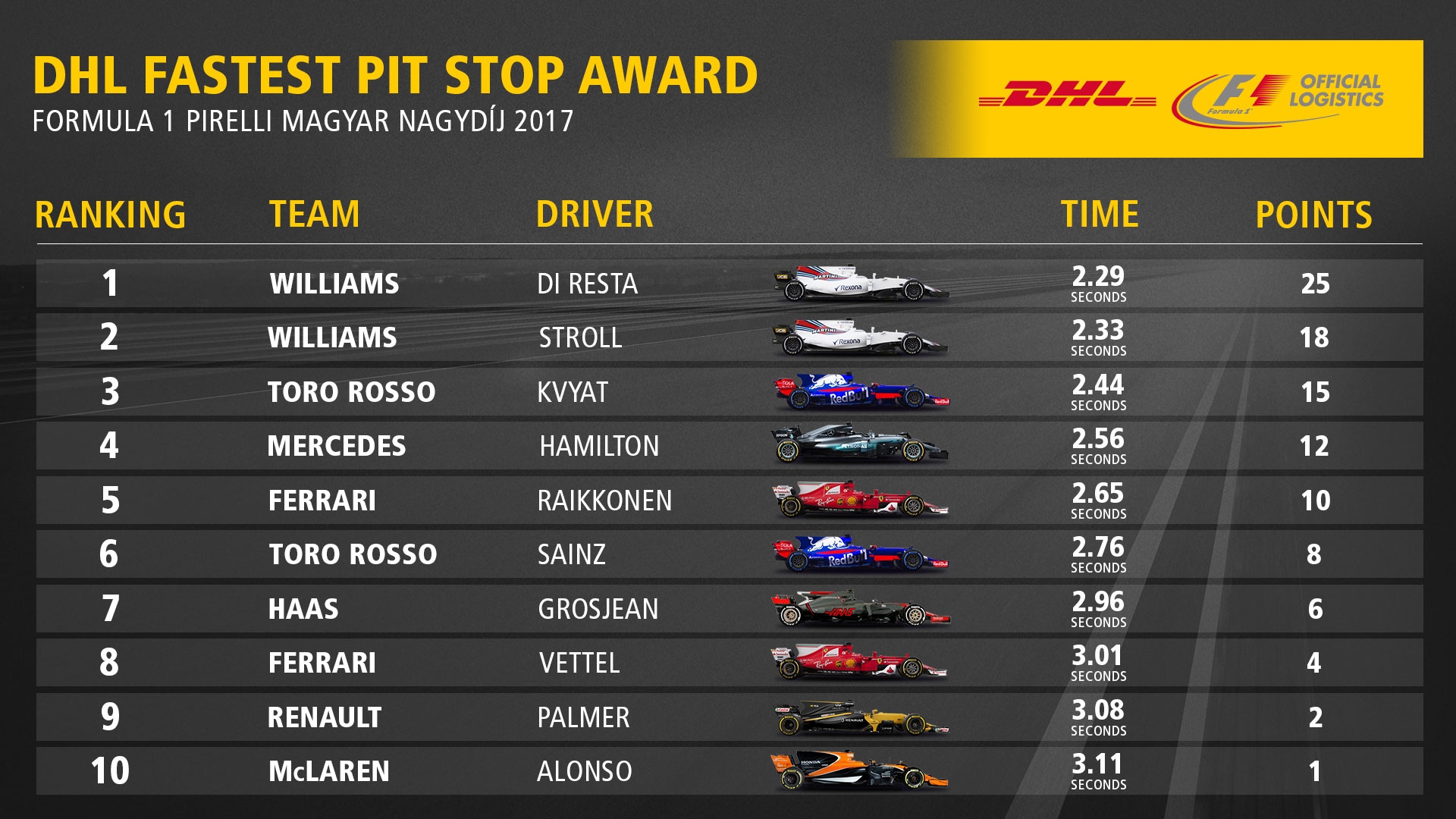 Gasly to 'wait and see' about Toro Rosso promotion