Changes to the Formula 1 superlicense system made this week by the FIA have placed Formula 2 front and centre as the recommended path into Grand Prix racing.

“A number of amendments were approved by the World Motor Sport Council regarding changes to the Super Licence points table – as well as adjustments to the eligibility of championships and drivers to accumulate points,” the sport's governing body said in a statement.

Last year, the FIA introduced a new eligibility requirement for prospective Formula 1 drivers. Rookies would only be allowed to compete in F1 once they amassed sufficient eligibility points. These are awarded based on their performance in other championships.

The system was designed to stop drivers coming into F1 too young or without sufficient experience. The FIA also wanted to promote a more structured career path for budding Grand Prix stars.

As a result, drivers have to get 40 points over a three year period in order to qualify for a superlicense. Up to now, winning the title in GP2, IndyCar, FIA European Formula 3, Formula E or WEC LMP1 all earned 40 points. That constituted an instant pass into Formula 1 once they found a race seat.

But changes to the system announced this week mean that only the champions two series get the full points haul. Formula 2 (the new name for GP2) and IndyCar title winners both receive the maximum. The other three series champions are now credited with just 30 superlicense eligibility points.

The appeal of Formula 2 is further increased by 40 points also being available for those who finish the championship in second and third place. That compares to IndyCar in which the runner-up gets 30 points and third place just 20 points.

The points for winning the GP3 Series title have been reduced from 30 to 25 points. In the past, former champions including Valtteri Bottas and Daniil Kvyat moved directly to F1 without spending a year or more in GP2/Formula 2.

Formula V8 3.5 looks to have been frozen out by the changes. In the past, winning the title got the driver 35 superlicense eligibility points. However in the new system that's been almost halved, the champion how getting just 20 points.

However there's good news for WEC LMP2 drivers. They can now receive up to 20 points for winning the series. WEC GTE Pro and WEC GTE Am champions can also receive 10 points for their achievement.

The winner of Japanse Super Formula can look forward to receiving 20 points. Currently, Red Bull junior Pierre Gasly is in second place in this year's standings behind Hiroaki Ishiura, having won the 2016 GP2 title.

And several US-based series are also included in the FIA's licensing format for the first time. In future, NASCAR (Cup, Xfinity and Trucks), IMSA WeatherTech Championship and Indy Lights winners will be recognised.

FIA International A Licenses - the level below the superlicense – will also incorporate a system of points allocation in future.

FIA to allow current F1 cars at demo events in 2018 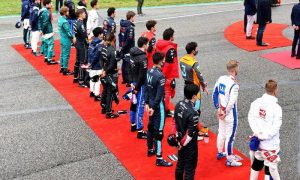