McLaren's new sporting director Gil de Ferran says that understanding where the team's current chronic weaknesses lie will be a vital step in getting it back to the front of the Formula 1 grid.

“The success I had behind the wheel and any success I have as a business man, I think came from really trying to understand what my weaknesses were,” de Ferran told Motorsport.com at Silverstone.

De Ferran certainly has a proven track record to show that he knows what he's talking about. The 50-year-old was ChampCar champion in 2000 and 2001 with Penske and runner-up in IRL in 2003, the same year than he won the Indianapolis 500.

De Ferran also briefly worked in Formula 1 as sporting director with the Honda team between 2005 and 2007, and later set up his own LMP2 team in the American Le Mans Series as well as co-owning an IndyCar team in tandem with Jay Penske.

But the task of turning around the fortunes of the ailing McLaren team must surely be among his biggest challenges to date. Originally coming on board as a consultant to team CEO Zak Brown, de Ferran took up his new role in the team after the departure of racing director Eric Boullier.

"This is really the philosophy I’m bringing to my job," he said. "Originally as an advisor to Zak, that’s how I was looking at things and I’ll continue to do this [in my new role] - but with more responsibility.

“I realised very early on in my life that success never comes alone. You don’t have success by yourself," he said. "Very few people are able to achieve many things in life by themselves, most of them are part of a team

“It’s clear to me that the team has a lot of talent,” he continued. "Wherever I look, you see smart guys ... There’s certainly a lot of talent and a lot of brainpower.

"[It's about] knowing how to get a team together, working together and getting people to feel focused and motivated, really understand where they are going, and truly engage.

“This is how I personally operate, and this is really the philosophy I’m bringing to my job," he said. "The key area here is communicating, having clarity in certain things. I think that will help going forward."

De Ferran was on the McLaren pit wall - in Boullier's old spot - for Sunday's British Grand Prix which saw Fernando Alonso finish in the points in eighth place.

Even so, the team slipped behind Force India in the constructors championship and is now seventh in the standings.

"Fernando put in a great, gritty drive to come home in P8," noted de Ferran. "We decided to go for an aggressive strategy on both cars to put the drivers in the best position to fight.

"Regardless, the focus continues on stepping forward at every event." 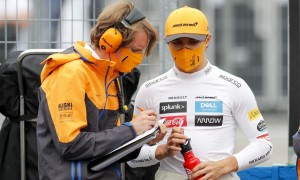