The top three teams have opted for a carefully balanced approach to their tyre selection for next weekend's German Grand Prix at the Hockenheimring.

Pirelli have offered teams a choice of medium, soft and ultrasoft tyres for the race weekend. It means that the line-up is 'non-continuous' with the supersoft tyres omitted from the selection, making for a big step between the ultras and the rest of the compounds.

Drivers get one set of each and then can make up the rest of their 13-set assignment as they wish.

Both Mercedes and both Ferrari drivers have opted to take just seven sets of ultras, as has Red Bull's Max Verstappen. His team mate Daniel Ricciardo is slightly more daring, opting for eight sets of the purple tyre.

Hamilton makes up the rest of his consignment with two sets of medium and four of the soft compound - the same as Verstappen and Sebastian Vettel.

Bottas meanwhile doubles down on the soft compound, opting for five sets and taking just the one mandatory set of mediums. That's the same selection as his fellow Finn Kimi Raikkonen.

The Haas F1 Team is the only other squad to limit itself to seven sets of ultras with Kevin Magnussen adding five sets of soft tyres compared to four for Romain Grosjean.

No one is taking fewer than seven, meaning everyone else is taking more ultras. Force India, Toro Rosso, McLaren and Sauber all opt for eight sets.

Like Ricciardo, they make up the balance with two mediums and three softs - with the exception of Charles Leclerc who flips the numbers. That makes him the only driver taking three sets of the hardest compound to the race.

Meanwhile Williams drivers Lance Stroll and Sergey Sirotkin will be equipped with nine sets of ultrasofts tyres for the race. Stroll takes two sets each of the remaining compounds, while Siotkin puts all his money on soft tyres and takes just the single default set of mediums.

That leaves Renault as the outliers for Germany, with ten sets of ultras going into each driver's overhead luggage. They split their strategy on the remainder with Carlos Sainz taking two sets of mediums and Nico Hulkenberg requesting two sets of softs. 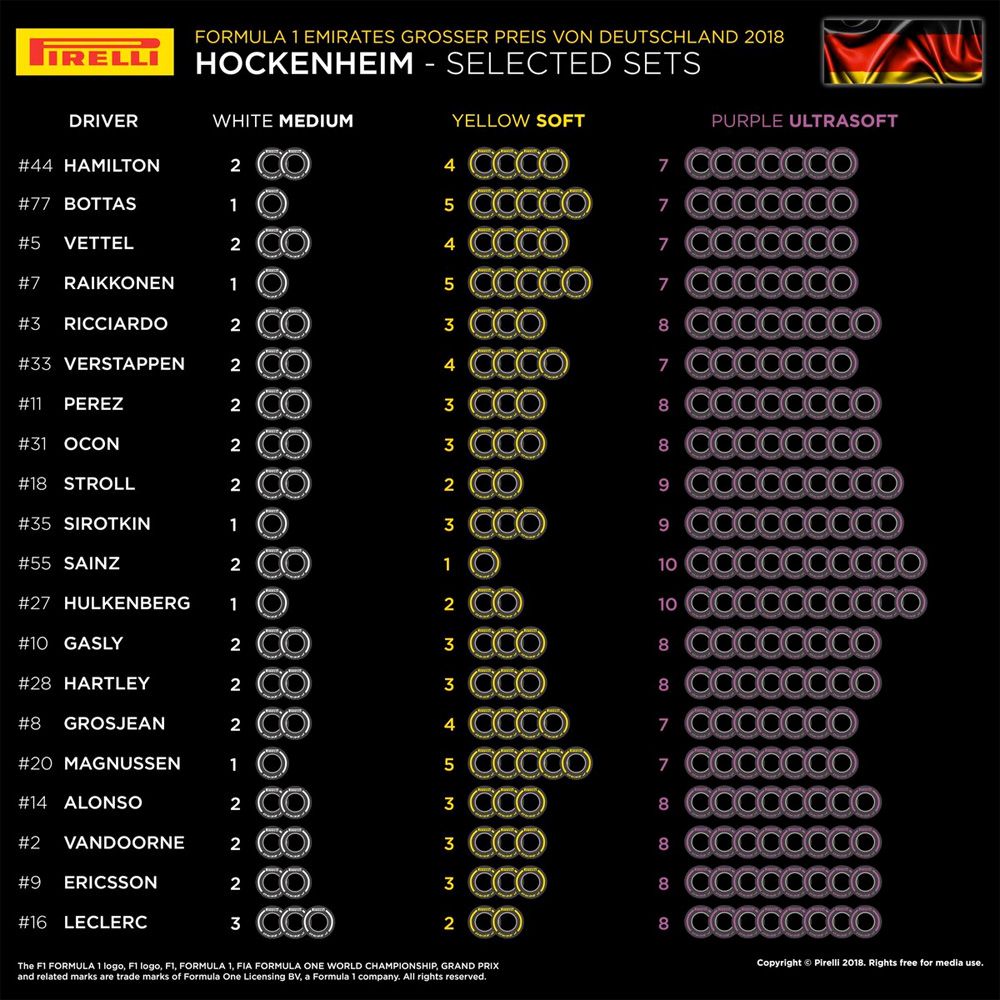 Renault explains why the Hard call was the right one