The Mercedes team is continuing to play it safe when it comes to tyre selection for the next race, the Russian Grand Prix at Sochi.

Lewis Hamilton and Valtteri Bottas have requested just seven sets of hypersoft tyres for the event, which is less than anyone else on the grid.

Teams are allocated 13 sets of tyres in total for each race weekend. They get one set of each available compound by default, and can then choose the rest.

As with Singapore, Pirelli has chosen to offer soft, ultrasoft and hypersoft tyres for the next race. Skipping over the supersofts makes for a bigger step between the prime and the option tyre, while the hypersofts are viewed as more of a 'qualifying' compound.

Last time around Mercedes asked for just six sets of the pink tyres. Although Hamilton clearly made this strategy work - he took pole on Saturday and won the race on Sunday - this might have been slightly too limiting for the Silver Arrows.

So for Sochi it's seven sets of the hypers, four of the ultrasoft tyres and just two of the soft compound for both drivers.

This compares to nine sets of hypers for Hamilton's chief title rival Sebastian Vettel, who raids one set of softs and one of ultras to make room in his consignment.

It's identical to the allocation that Vettel took to Singapore, and is the same line-up as both Red Bull drivers Daniel Ricciardo and Max Verstappen have requested for Sochi, as well as Haas' Romain Grosjean and Sauber's Charles Leclerc.

Vettel's Ferrari team mate Kimi Raikkonen takes a slightly different approach, with only eight sets of hypers in exchange for an extra set of the hardest compound. Other drivers taking the same tyres to Sochi are Sergey Sirotkin and Brendon Hartley.

Sirotkin's Williams team mate Lance Stroll is taking just the one default set of softs to make room for four ultras and eight hypers. Pierre Gasly makes the same call in the other Toro Rosso.

Vandoorne's team mate Fernando Alonso is alone in asking for three sets of soft tyres for the next race. He's mixing this up with two sets of ultras and eight hypers.

And the award for most aggressive a strategy of the weekend goes to Renault, with both Nico Hulkenberg and Carlos Sainz taking ten sets of hypersoft tyres - more than anyone else.

Hulkenberg adds two lots of ultras to the default set of softs, while Sainz prefers two sets of the yellow compound and will have just one set of ultras for the whole weekend. That probably means he is aiming to start the race on the hypersoft tyres and make an early switch to softs for the rest of the afternoon. 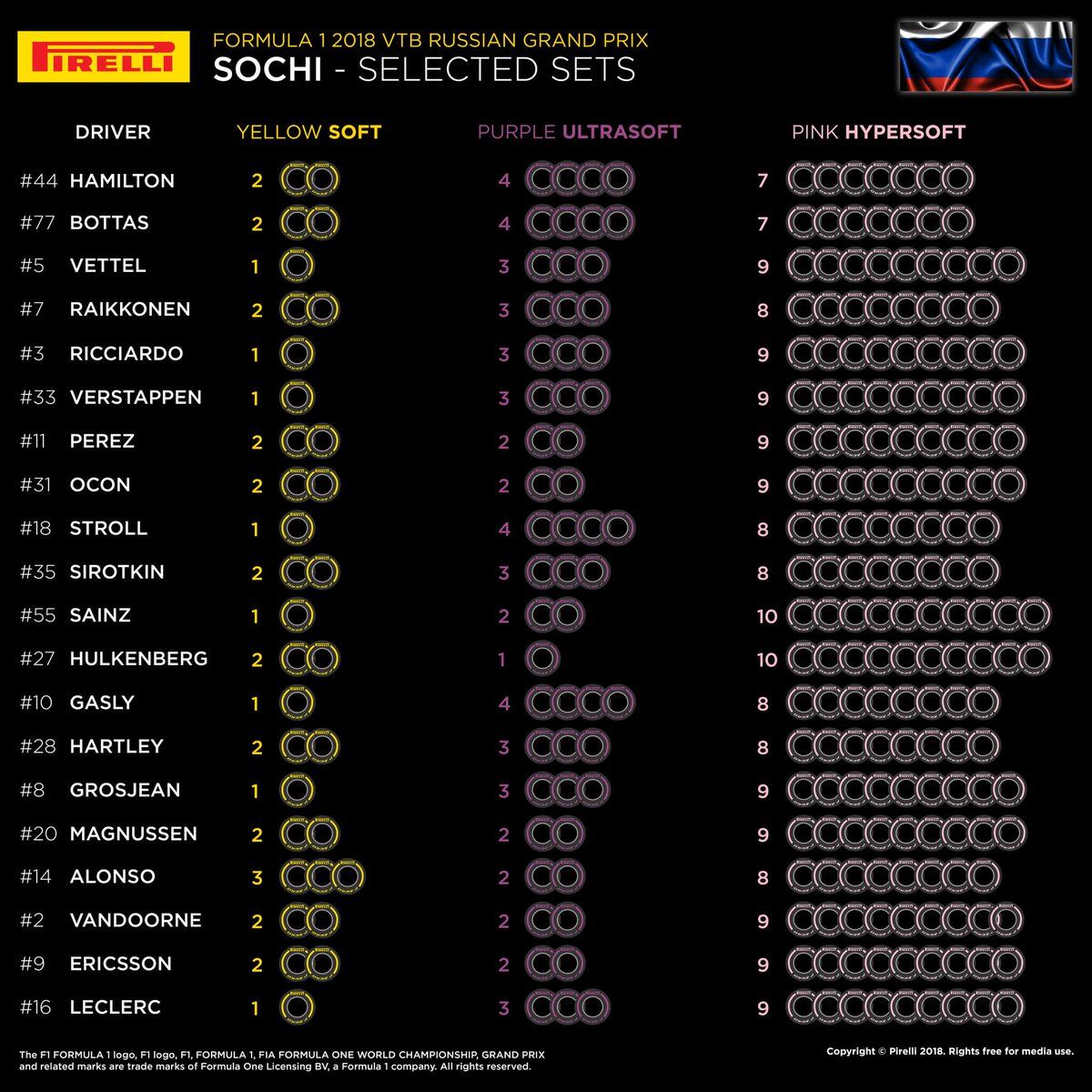 Arrivabene ready to take the blame if Ferrari flops