Sebastian Vettel suffered a potentially decisive blow to his 2018 world championship hopes in Suzuka, after dropping a further 17 points behind Lewis Hamilton in the standings.

With Hamilton winning the Japanese Grand Prix, Vettel was only able to finish the race in sixth place, putting him a whopping 67 points behind the Briton with just four races remaining.

No one has ever lost the championship with that sort of advantage this late in the season. But Vettel insists that is far from giving up.

"It's difficult from where we are, but what do we have to lose?," he said after the race. "We'll give it everything we can.

"Let's see what the next races bring. I don't think it can grow any bigger!

"There's still some important things that we can understand and learn about the car. Obviously if races go like this then it's a bit of handover, but we're trying our utmost to fight and resist."

He added that the fighting spirit at Ferrari was still very much in evidence despite the team's waning fortunes as the season has gone on.

"I find it quite inspirational - you walk in the garage and the guys are all fired up," he said. "That's certainly helped.

"Obviously it's not been an easy couple of weeks, but the spirit in the team considering how touch the last weeks is unbroken."

After his miscue in a wet qualifying session on Saturday, Vettel started today's race by making rapid progress - only to have it all taken away after he spun following contact with Max Verstappen following a safety car restart which dropped him to the back of the field.

Ironically, he had no need to pass Verstappen as the Dutch driver had already been handed a five second penalty for contact with Vettel's team mate Kimi Raikkonen on the opening lap.

But Vettel was unrepentant about trying to pass the Red Bull down the inside of the sweeping Spoon left-hander, and put the blame on the other driver for their costly contact.

"I was obviously pushing to get past, but I wasn't desperate to get past," he said. "I knew he had a penalty but I also felt that we were faster.

"He was clipping on that straight with the battery and I was catching, I had a good exit. Obviously the safety car helped me to be closer.

"The gap was there, but as soon as he saw me, obviously he defended but I had the inside. As soon as he realises there's someone close or next to him, he tries in my opinion to push when you shouldn't push anymore.

"Look at Kimi, he's off the track and he comes back. If Kimi just drives on they collide, but it's not always right that the other guy has to move."

Vettel compared what he saw as Verstappen's clumsy driving style with the way he had made his way back through the field to sixth place without further incident despite damage to the sidepod of the SF71H. 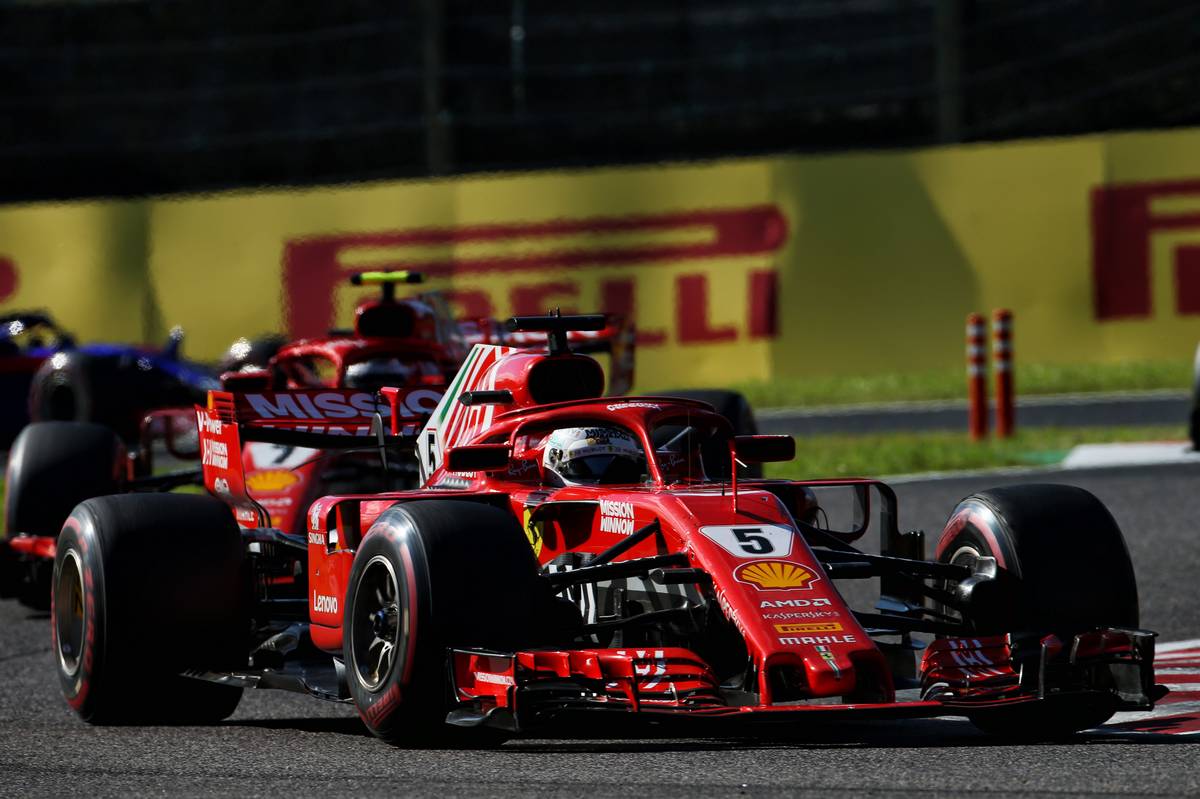 "I think I got through the whole field without any trouble," he said. "Sometimes closer sometimes with more margin, but you know it's normal that sometimes it gets close but I think you always have to give a space.

"In the end we're all racing. This is part of racing, don't get me wrong. I don't regret the move [on Max]. Obviously with that outcome you would do different because with hindsight it's always easy."

Vettel's boss, Ferrari principal Maurizio Arrivabene, had raged about the team's 'unacceptable' mistakes in qualifying, but would hear no criticism of Vettel's actions in the race.

"I was a bit disappointed yesterday, but having said so we win and we lose together," he said. "Today, the team and the driver reacted very well.

"We had circumstances during the race that impeded us getting onto the podium, but at least the podium was within our reach today," he told Sky Sports F1. "Even with both cars damaged, they were going quite well.

"Why do we have to talk about mistakes all the time? If you look, we had the news about [Max's five-second] penalty very, very late. Sebastian was doing his job."

Arrivabene has said that if the team fails to win the title this year then he will accept the final blame. But like his star driver, he wasn't giving up the battle just yet.

"I know that the situation looks impossible but sometimes our job is to challenge the impossible," he said. "This is what we're going to do, and we'll try and do for the final four races."

Hamilton breezes to victory in Suzuka as Vettel trips up