The Mercedes team has finally been able to crack open the champagne and celebrate after clinching their fifth consecutive constructors championship.

Ferrari had needed to finish ahead of Mercedes in the points in Brazil to stand a chance of taking the title battle to the season finale in Abu Dhabi, but in the end they didn't come close to doing that.

"We had ups and downs," said Wolff. "We recovered, Ferrari came back very strong and Red Bull at the end, but that makes the championship victory so much more enjoyable."

The sentiment was shared by Hamilton's race engineer Pete Bonnington.

"It's been the best championship yet," he told Sky Sports F1. "It's just been fantastic. The fact we had such such strong competition - just been an awesome year.

"[Lewis] has driven perfectly I think," he continued. "He always wants to win. It doesn't matter: if you tell him it's a numbers game and we're just playing the numbers, nope - he still wants to go for that win."

And win is exactly what Hamilton did on Sunday in Interlagos. It made up for finishing off the podium last time, which had inevitably put a bit of a damper on the post-race title celebrations.

"Mexico was a tough race for us and it didn't feel like one that we could really, really celebrate," Bonnington admitted. "But this one has been a solid weekend, and yeah - we're going to go for it!"

It's the first time that Hamilton has clinched a title and then gone on to take a victory in one of the remaining races of the season. He was keen to give the team trackside and back at Brackley full credit for the achievement.

"Honestly, these guys have worked so hard. The last six years have been an incredibly journey with them," Hamilton said. "I'm just so proud of everyone.

"They give me the tools and I try and do the best I can with it. I'm proud that that I'm able to sometimes bring a little bit more than is needed or is capable of. That's what I live for.

"This is what everyone works for, for the whole year - everyone wakes up, goes to work everyday and tries to bring the best out of themselves, and really pull together as a unit.

"I've always told you how much an honour it is to drive for them. And today was like the best style we could do it." 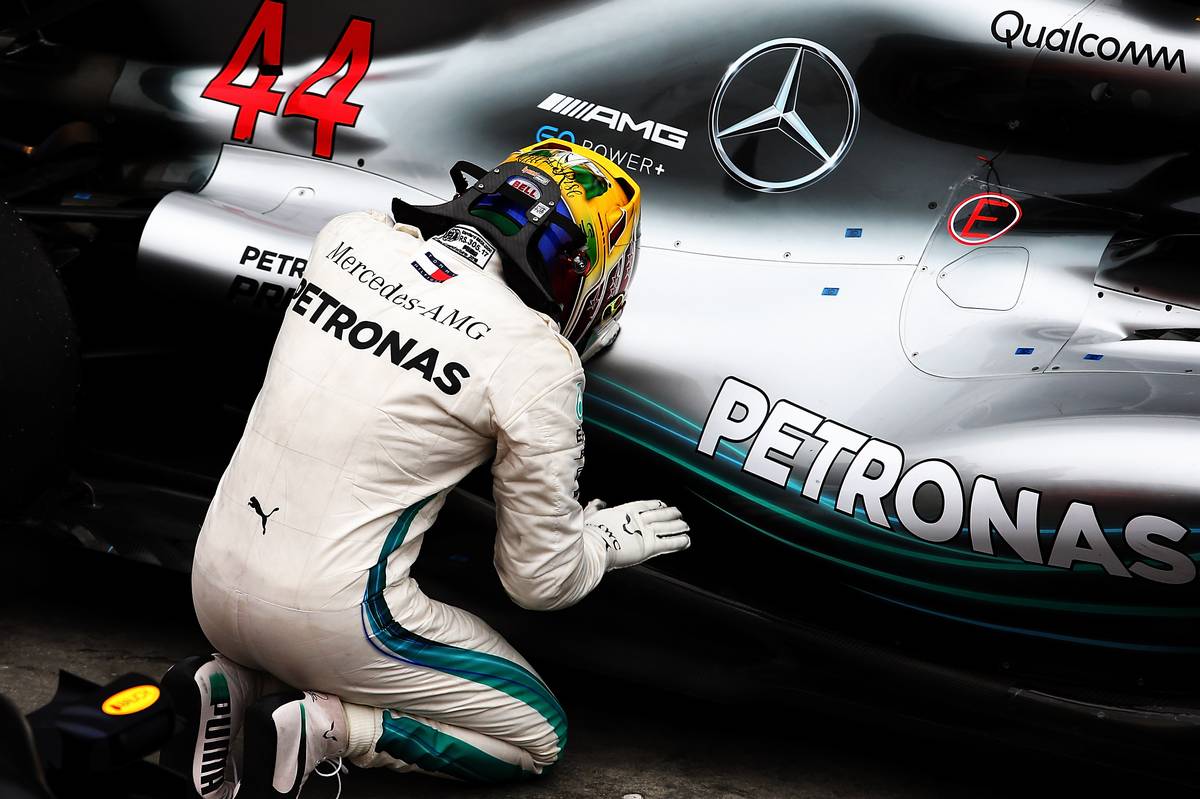 Although he started from pole position and won the sprint into the first turn, Hamilton sound found himself under pressure - but not from the expected source.

Rather than being challenged by Sebastian Vettel, it turned out that the real threat to Hamilton this week was Red Bull's Max Verstappen.

"We were struggling, we had problems with the engine." Hamilton admitted. "[Max] passed us like we were a sitting duck at one stage."

It looked like Hamilton had no way back to the front, but he was regifted the lead when Verstappen clashed with Force India's Esteban Ocon and briefly spun off at turn 2.

"Obviously they made a mistake and that brought us back into contention," Hamilton said. "I saw it happen and it wasn't something that I was surprised by or anything like that.

"I saw them racing, but they weren't racing for the same position," he continued. "In my mind I would have been in a different state of mind.

"Fortunately he was able to keep going and no one got hurt," he said. "It was a racing incident I guess.

"But Max is like that go-getter guy and every now and then it bites you," he added. "But I'm really proud - I don't care about anyone else!"

Horner: Ocon 'lucky to get away' with just a push from Max