If you're no longer racing in Formula 1, the next best thing is a simulator role with Mercedes according to Stoffel Vandoorne.

After two full years of F1 , the Belgian's contract with McLaren was not renewed, leaving the 26-year-old on the sidelines for 2019.

However, Vandoorne - rated as one of the sport's brightest talents when he entered Grand Prix racing in 2017 - was picked up by Mercedes for which he will multi-task, racing for the Silver Arrows-backed HWA Formula E team and handling F1 simulator work at the manufacturer's Brackley factory.

"I will be involved with them," Vandoorne told Formula1.com, referring to his involvement with the world championship outfit.

"That’s an exciting part for me as well, to still be involved in the F1 world and to be with the world champions. For me, it will be a very interesting move.

"I’m sure I can bring them a lot of fresh ideas, but also for me to see the differences there are, because I’ve only worked with McLaren in Formula 1.

"So it’s exciting for me as well to kind of have a bit of a fresh environment."

For Vandoorne, the opportunity is all about keeping tabs on a sport he strongly hopes he can return to sometime in the future, emulating the likes of Kevin Magnussen in 2016 or Dany Kvyat who will be back on the grid next year.

"It’s definitely good to keep involved in the world because you never know what happens in the future," said Vandoorne.

"I think to be involved with Mercedes and to perform the work for them, it’s good that they will know exactly what I’m capable of doing. And we don’t know what the driver market is going to do in the future.

"It was a bit crazy this season and who knows what it will be next season. It’s hard to tell. So it’s good to be involved and to be prepared for anything that comes up."

Webber: 'I think we're all a bit concerned about it' 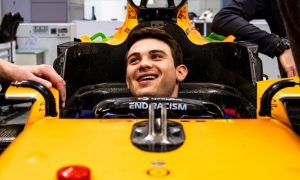