The FIA's World Motor Sport Council has approved the idea of awarding an extra championship point for fastest lap in 2019, with the new rule implemented from Melbourne.

The new sporting rule will now need to be endorsed by the F1 Commission through an e-vote in order for it to be included in Formula 1's 2019 Sporting Regulations.

The extra point idea stems from a fan survey and research conducted by Liberty Media and is seen as a tool to potentially spice up the show.

However, only drivers finishing in the top-10 will be eligible for the bonus point linked to the fastest race lap, a rule meant to prevent enthusiastic back-markers from slapping on a fresh set of tyres and engaging in a mad dash glory run in the closing stages of a race.

The new rule isn't exactly a novel idea for Formula 1 as a single championship point was awarded for fastest lap during the sport's first decade, from 1950 to 1959.

A look back at the history books even tells us that the scheme allowed Mike Hawthorn to beat Stirling Moss to the world title in 1958.

Brawn wants all F1 teams onboard for second Netflix series

Magnussen would 'do something else' if title was inaccessible 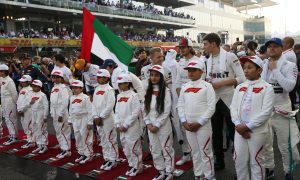