According to Mercedes, Lewis Hamilton's performance in last Sunday's Australian Grand Prix was hampered by a damaged floor, but was the German team wary of a potential issue before the race?

Mercedes argued that the slight damage sustained by Hamilton's W10 at some point during the race would have had a significant effect on the car's aerodynamics.

A thorough post-race inspection by the Silver Arrows' engineers revealed a missing component located on the trailing end of the W10's floor, right in front of the left rear wheel.

The specific part, and its associated slot in the floor, helps channel an energized flux of air that mitigates the effect of the turbulence produced by the tyre's rotation and helps combat 'tyre squirt'.

The sudden breakage or loss of the small but entire rear left corner of the floor would have inevitably led to balance issues impacting the handling of the W10's rear end as left and right side downforce levels would have no longer been in sync.

Interestingly, the Mercedes crews were seen working on this exact area of the car on Sunday morning. 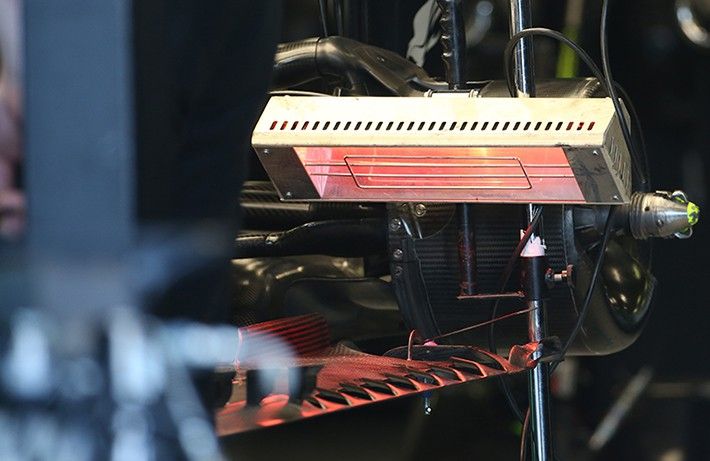 As the exclusive picture here-above shows, it appears a resin was applied to the specific part, likely to reinforce the floor's left corner element which was then heat cured.

Hamilton noticed a change of handling of his W10 after four laps in Sunday's race, and suggested that a piece of debris - perhaps from Robert Kubica's front wing - had crucially damaged the W10's floor.

Regardless of the cause of the damage, Mercedes' engineers will no doubt strengthen the specific area of the W10's floor for next week's Bahrain Grand Prix.

Bahrain tyre selection: Mercedes and Ferrari on the same page

Williams so far behind, races will be 'test sessions' - Russell