Red Bull boss Christian Horner says that the aeroscreen concept might still have a shot of getting picked up by Formula 1.

The Red Bull Advanced Technologies design was dropped in favour of rolling out the halo cockpit protection system in 2018. This helps deflect debris and other solid objects away from the driver's head in an open cockpit.

The halo's value was demonstrated in a first lap crash at last year's Belgian Grand Prix. Fernando Alonso's car was launched into the air and fell onto Charles Leclerc's Sauber, with the young driver's head escaping harm thanks to the device.

Red Bull proposed a more conventional 'windshield' type concept, but its on-track test in 2017 reportedly made Sebastian Vettel feel 'dizzy' due to the distorting effect of looking through the thickened material.

"Forward vision is not very good, I think it’s because of the curvature," Vettel reported at the time. I tried it this morning [and] I got a little bit dizzy!"

With the windshield out of the running, the halo was formally adopted the following season and is now standard on all F1 cars. But the shield is back on the agenda after the US open wheel IndyCar Series opted to push ahead with its development.

Defending series champion Scott Dixon will try out the latest iteration of the device - now called the aeroscreen - at Indianapolis Motor Speedway next month. It incorporates an F1-style halo with a screen made from ballistics-grade material.

Dixon tried out an early version of the screen last year at Phoenix, along with additional testing in a simulator. If the new outing is successful then there will be further tests in October at the Barber Motorsports Park in Alabama to see how it fairs on a road course.

"I'll be interested to see how it operates in IndyCar," Horner told Autosport magazine this month. "How it's received, some of the challenges that will inevitably happen.

"It will be a good test pit for it," added Horner, who is also CEO of Red Bull's advanced design company. "Hopefully it will work out well for them.

"And if it works, then why not look at introducing it to F1?" 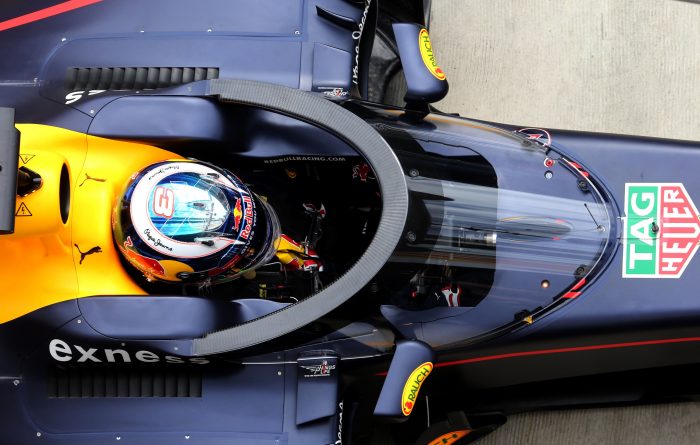 IndyCar has seen a number of serious incidents involving head injuries in recent seasons. Former F1 driver Justin Wilson died in 2015 following an incident at Pocono Raceway, where a crash ahead of him sent debris flaying into his path and into his cockpit.

James Hinchcliffe was knocked unconscious by flying debris during the 2014 Indianapolis Grand Prix road race, and sustained a concussion that delayed his participation in qualifying for that year's Indy 500.

"I should have been on the podium the year I got knocked unconscious," Hinchcliffe said afterwards. "I remember very clearly that I wasn't on the podium!"

Asked if the aeroscreen would have made a difference, Hinchcliffe said: "I would have got that podium, dammit!"

The initial push for a cockpit protection system came from an accident in qualifying for the 2009 Hungarian Grand Prix in which a rear spring from Rubens Barrichello's car detached and flew into Massa's face.

Although protected by his racing helmet, Massa suffered a serious skull fracture and required immediate surgery, which sidelined him for the remainder of the season.