But he admitted that the day's triumph had come with mixed emotions, just 24 hours after his friend Anthoine Hubert was killed in a shocking Formula 2 accident at Spa.

"On the one hand, I have a dream since I was a child that has been realised," Leclerc said after fending off Lewis Hamilton to the finish line in the Belgian Grand Prix.

"On the other hand, it has been a very difficult weekend since yesterday," he continued. "We have lost a friend first of all, and it's very difficult in these situations.

"So I would like to dedicate this win to him," he said. "We have grown up together. My first ever race I did when I was seven was with Anthoine. It's such a shame what happened yesterday.

"I can't fully enjoy my first victory," he added. "But it is a memory that will live with me forever.

"I've been waiting for this moment since I started karting - since I was three and a half," he told Sky Sports F1 later. "It's been a long time. But as I said, given the circumstances it's a difficult weekend over all."

The emotion of the occasion was something that Leclerc had to put to one side during the race itself, which depending on managing his tyres to successfully ward off the threat from Hamilton.

“It’s been a very difficult race," he admitted. "We’ve been struggling quite a bit with the tyres towards the end.

“The end of the race was definitely not easy," Leclerc said of staying ahead of Hamilton in the final laps. "He was catching very quickly. I had a quite a bit of pressure, but I’m happy I kept him behind. 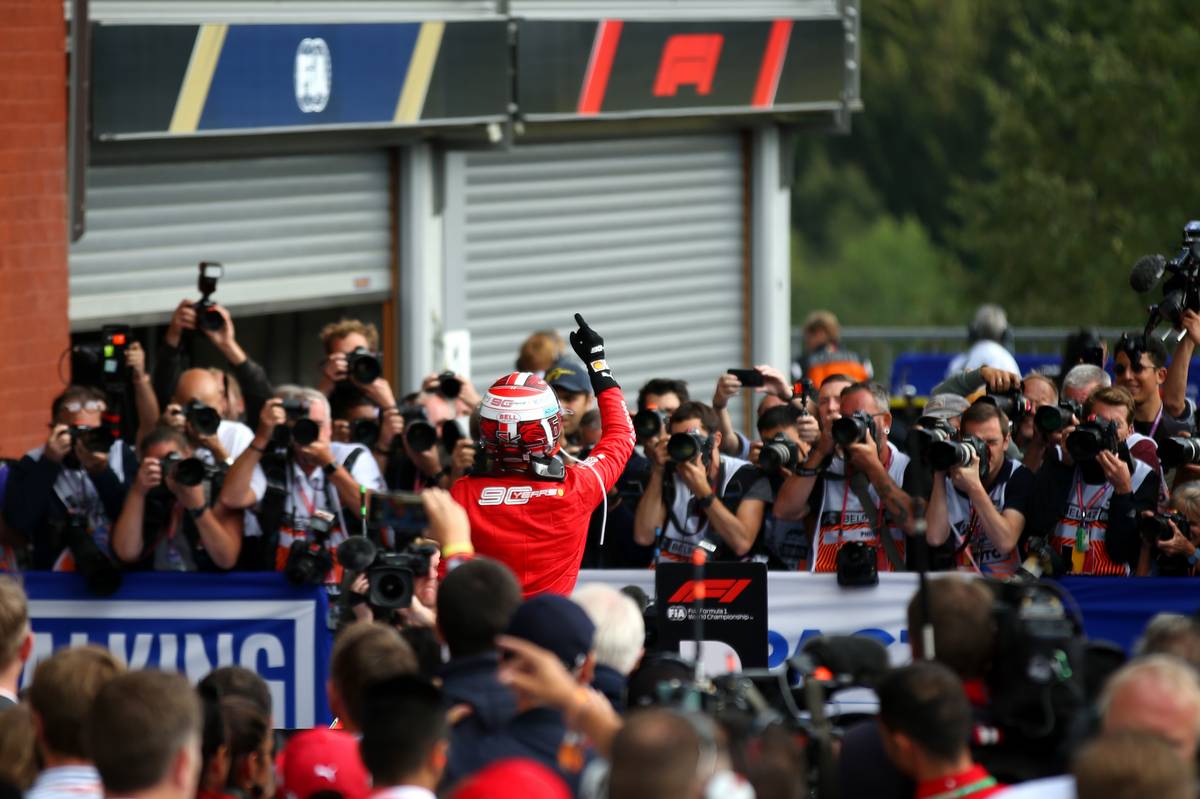 "I’m a lot happier than with what I managed in Budapest on my side," he said. “It was better, but Mercedes was very quick in the race than we expected.

"But at the end it’s a good weekend, performance-wise, with the pole position and my first victory. So for that I’m satisfied."

Hamilton eventually fell one second short of overhauling Leclerc, allowing the young driver to taste the top step of the podium for the first time in 34 Grand prix starts.

For many fans it was a long overdue victory for Leclerc. He missed out on a near-certain win in Bahrain with an engine issue. And in Austria he succumbed to a hard pass from Max verstappen in the final laps.

But today's win in Spa makes up for much of that. Not only it it Ferrari's first win of 2019, it's first time that a driver has clinched their first F1 win at Spa since Michael Schumacher in 1992.

"I was aware - someone from the team told me yesterday," said Leclerc. "It's great. Hopefully I'll have half the victories he did in his career, but still a long way to go.

"It feels good to have the first victory at least," he added.

Even better would be a home win for Ferrari at Monza next week before the adoring Tifosi. However, Leclerc was cautious about his prospects of back-to-back wins.

"We are very quick down the straight, but then again Mercedes are extremely quick in the race," he pointed out. "We need to understand why we lose this advantage in and try and improve it for Monza, because today they were very quick."