Lewis Hamilton took his 90th career victory in F1 at the 2020 Tuscan Grand Prix, despite his Mercedes team mate Valtteri Bottas initially getting the better launch from the grid and claiming the early lead.

The race saw a dramatic start, with Max Verstappen and Pierre Gasly off into the gravel at turn 2. The restart ended up in a nasty multi-car accident when the cars bunched up, with four cars including Carlos Sainz out of the race forcing a red flag.

A standing restart allowed Hamilton to slipstream Bottas and retake the lead, which he held through a second red flag stoppage and restart, this time for Lance Stroll running off at Arrabbiata. 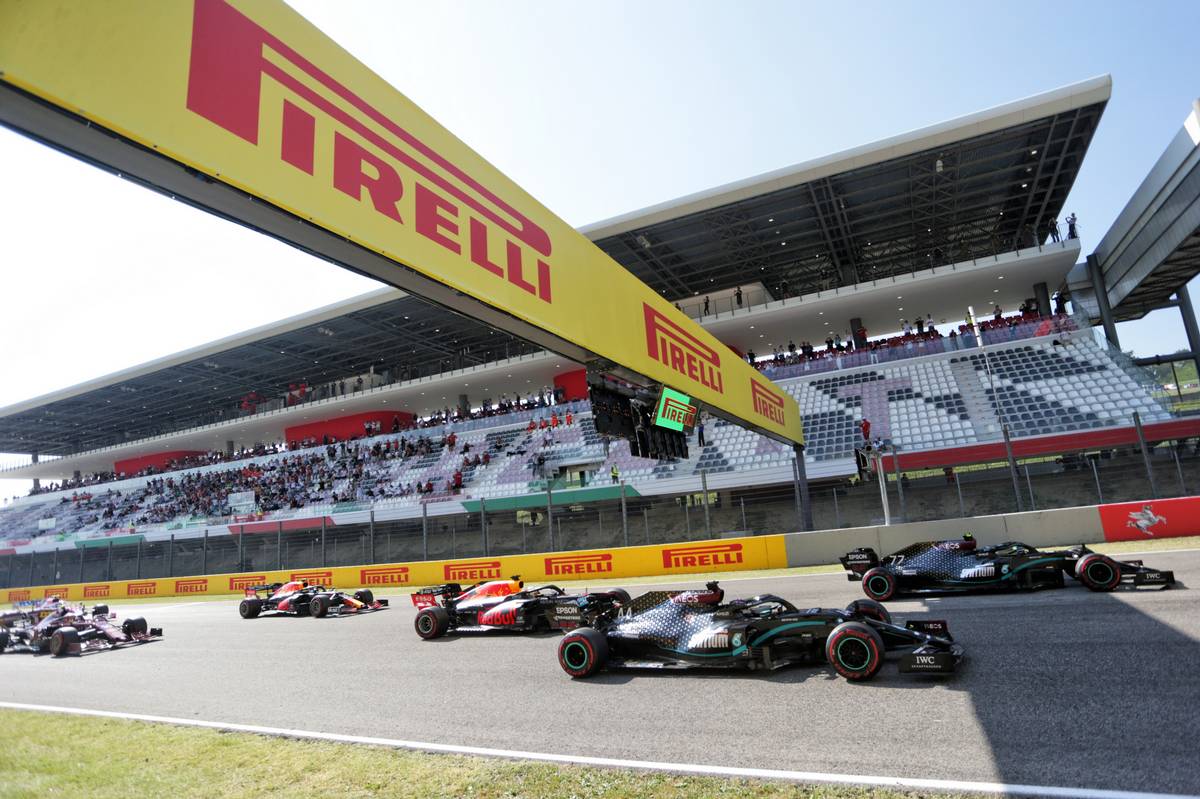 The first Grand Prix ever to be held at the Autodromo Internazionale del Mugello began with a brilliant launch for Valtteri Bottas putting his Mercedes into the first corner ahead of team mate and pole sitter Lewis Hamilton. Meanwhile Charles Leclerc jumped into third ahead of Max Verstappen, who was lacking power after engineers had earlier been working on a power unit issue with the car on the grid right until the last minute.

Verstappen's slow pace left him vulnerable to cars streaming past, and then he was hit from behind by Pierre Gasly who had himself suffered contact after tangling with Kimi Raikkonen and Romain Grosjean. The Dutch driver was propelled into the gravel trap at turn 3 along with Gasly, both cars out of the race. Also caught up in the opening fracas was Carlos Sainz who had been spun round by Lance Stroll and left stationary in the centre of the track where Sebastian Vettel ran into him at slow speed. The front wing of the Ferrari was damaged, obliging him to pit when the safety car was scrambled.

The race restarted on lap 7 with Bottas once again seeing off the threat from Hamilton and Leclerc to lead into turn 1, and Alex Albon now flying the Red Bull colours ahead of Stroll, Daniel Ricciardo, Sergio Perez and Lando Norris. But with the leaders leaving the restart until the last minute, congestion further back saw the field become suddenly compressed. Kevin Magnussen had to abruptly slow which led to Antonio Giovinazzi running into the back of him; the Alfa Romeo was then sent into the air by a rear impact from Carlo Sainz, and it landed on the side of Nicholas Latifi's Williams. As chaos reigned, Romain Grosjean was furious but fortunate to emerge from a cloud of debris unscathed. 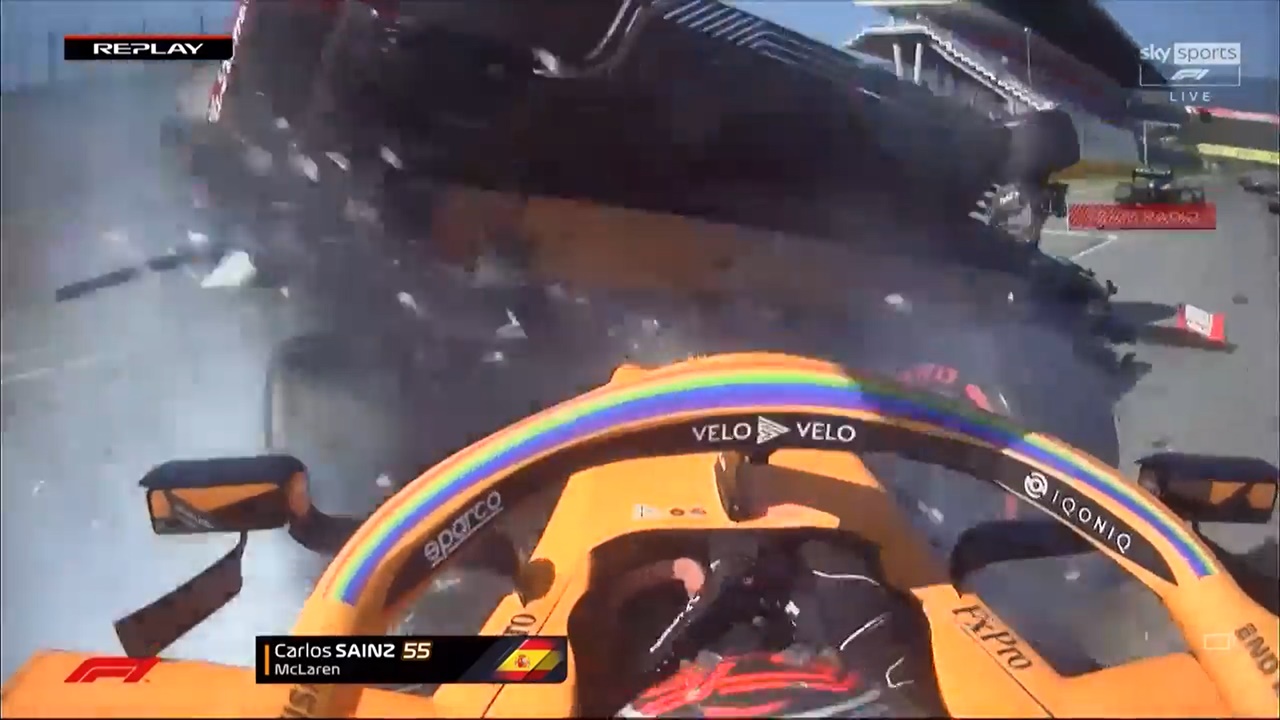 With so many cars out of the race at once and bodywork scattered all over the front straight, race control was forced to red flag the race for a second week in succession to allow for extensive clean-up operations. The cars gathered on the pit lane where they were able to make repairs and take on new tyres with a 'free' stop as they awaited the restart following a near half hour stoppage. In the case of Esteban Ocon, the Renault mechanics was busy investigating a brake fire on the RS20 that proved to be terminal, forcing the team to retire the car.

It left 13 cars taking to the track to resume the race with a standing start. Bottas got the better launch with Hamilton immediately tucking into the slipstream of his team mate, allowing him to then pop out and sweep around the outside through the opening corners to take the lead. Leclerc held on to third place but Albon had a poor start and dropped three places behind Stroll, Perez and Ricciardo. Albon was then able to steady the ship in seventh ahead of Norris, with Daniil Kvyat and George Russell rounding out the top ten, leaving Kimi Raikkonen and Sebastian Vettel on the outside looking in, and Grosjean running last of the surviving cars.

Now fitted with medium compound tyres, the two Mercedes quickly began to pull away from Leclerc. Hamilton was already safely out of DRS range of Bottas, but there was concern about his brakes which had been smoking heavily on the grid even if they were currently showing no adverse signs at race pace. Stroll was doing his best to harry Leclerc for a podium position, while Ricciardo had managed to pick off Perez for fifth. Further back Vettel was able to get the better of Raikkonen and duly set his sights on catching Russell to snatch the final points position away from the Williams. 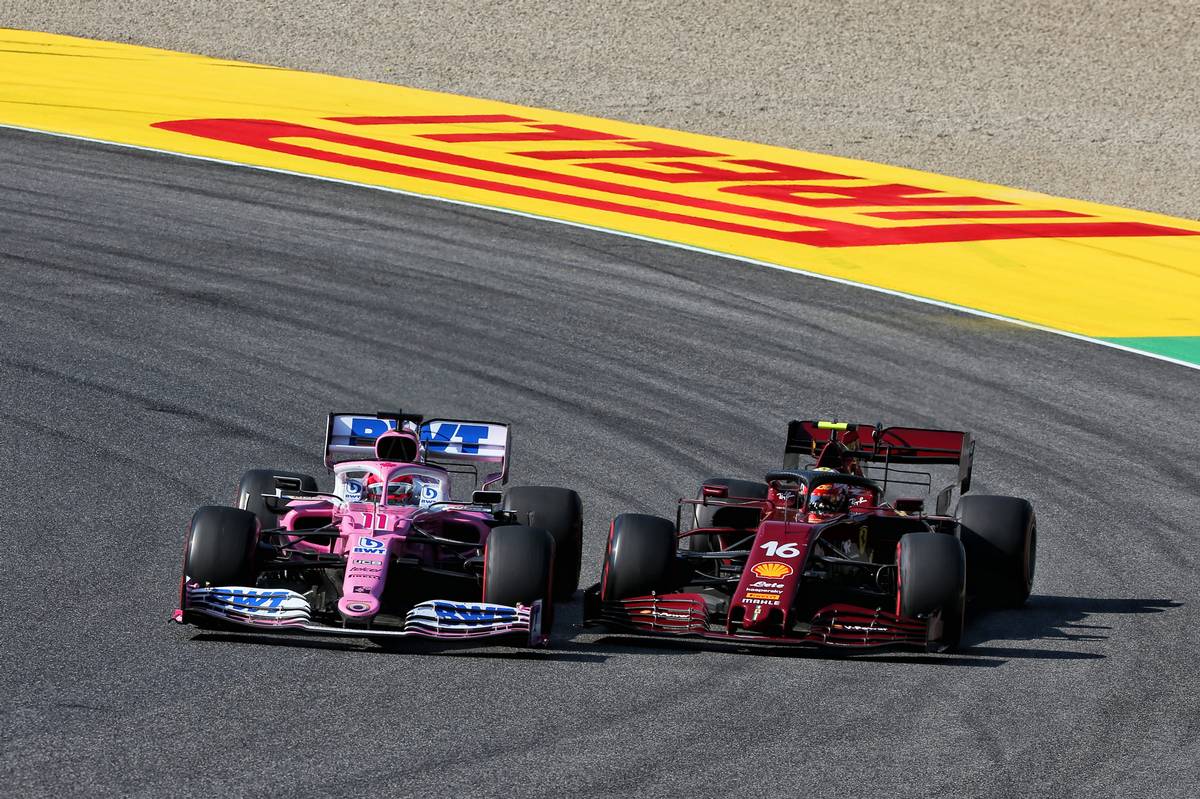 Lap 18 saw Stroll use DRS to finally dispatch Leclerc, the first of many drivers to pass the Ferrari as its soft tyres degraded, while in the background it was Albon taking care of business with Perez. Leclerc subsequently fell to sixth before he finally pitted for a set of hard tyres to see him through the rest of the afternoon, even though it meant dropping to dead last.

Ricciardo was next to pit for mediums on lap 28, followed by a dreadfully slow stop for hard tyres for Raikkonen next time by. The rest of the field came in over the next few laps, with Stroll dropping behind Ricciardo as the Renault achieved the undercut. Hamilton was still happy with his tyres but Bottas wanted a new set of hard tyres on lap 32; Hamilton was obliged to pit on the next lap, making the same tyre selection despite the Finn's earlier preference for opting for whatever choice his team mate hadn't. Last man in was Albon.

As the dust on pit lane settled it was Hamilton still leading Bottas by seven seconds followed by Ricciardo, then by Stroll, Albon, Perez and Norris. Leclerc had worked his way back up to eighth ahead of Kvyat, with Russell still clinging on to that final magical championship point from Vettel, and Raikkonen touching wheels as he forced his way past Grosjean for 12th around the outside of turn 1 on lap 34. 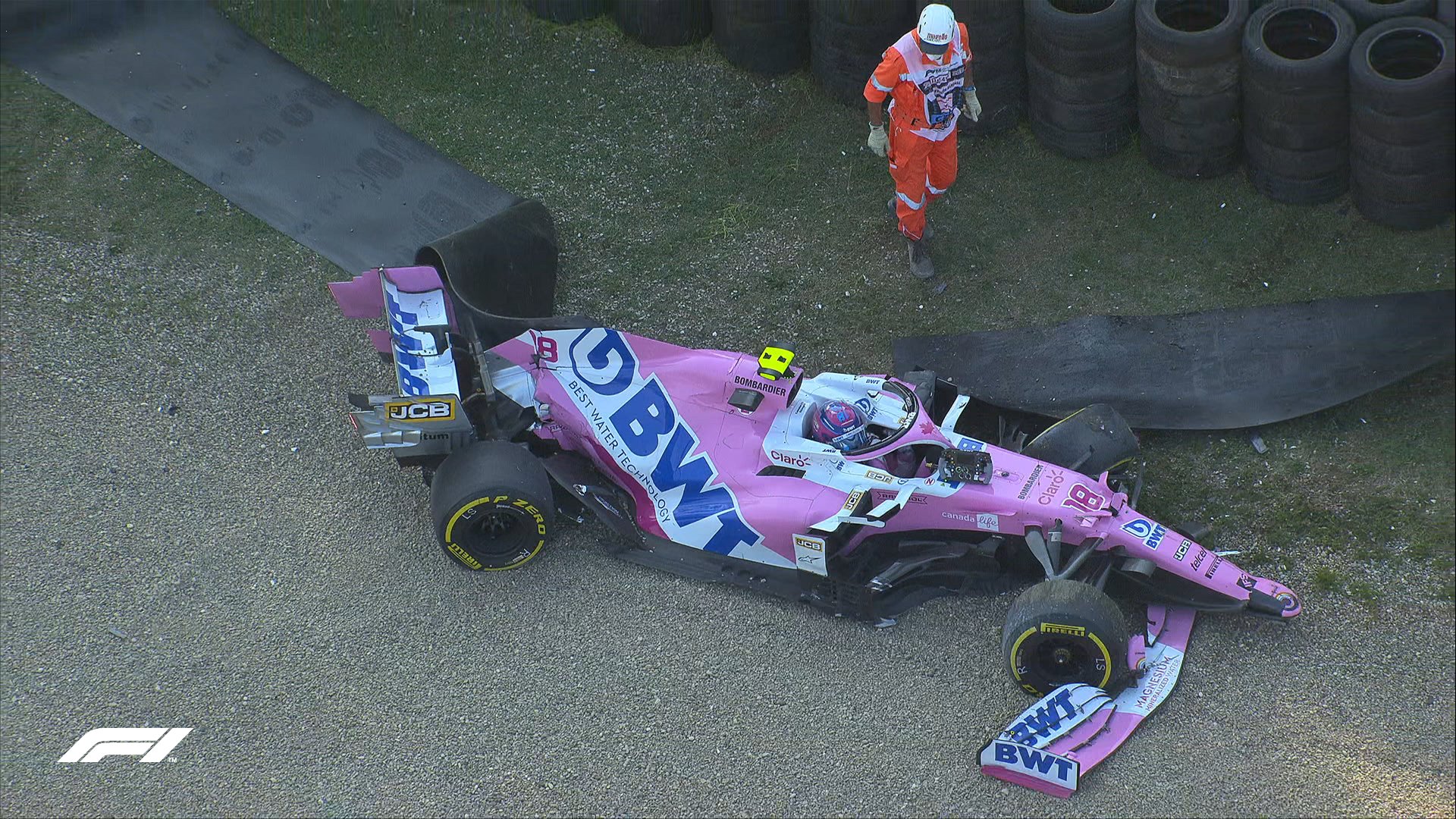 Leclerc was forced to make a second stop on lap 38 for another new set of medium tyres, again dropping him out of the top ten. He was repassing Vettel when the third safety car of the day was scrambled for a high-speed off for Stroll at Arrabbiata 2, a suspected puncture putting him hard into the tyre wall with race control eventually throwing a second red flag to allow marshals to effect repairs to the barrier once the smoking Racing Point had been hoisted away.

A second standing restart loomed, and this time the man at the front of the grid was able to hold the lead into the first corner. Hamilton blasted his way clear as Ricciardo bested a poor-starting Bottas for second, the Finn keeping his cool and rectifying the situation on the next lap to resume his run in second. Albon came out on top in a battle with Perez for fourth, followed by Norris and Kvyat. The restart had seen lapped cars including put back on the lead lap, but Raikkonen was handed a five second penalty for cutting the pit lane entry line which would drop him behind Leclerc, Grosjean and Vettel. Running last after a dismal restart cost him three places was the Williams of George Russell.

Albon set his sights on a podium, and on lap 51 he duly used DRS to punch his way past Ricciardo. Although encouraged by the Red Bull pit wall to give chase to Bottas, third was the best that he could manage by the time the chequered flag came out, which saw him followed across the line by Ricciardo, Perez, Norris, Kvyat, Leclerc, Raikkonen, Vettel, Russell and Grosjean. 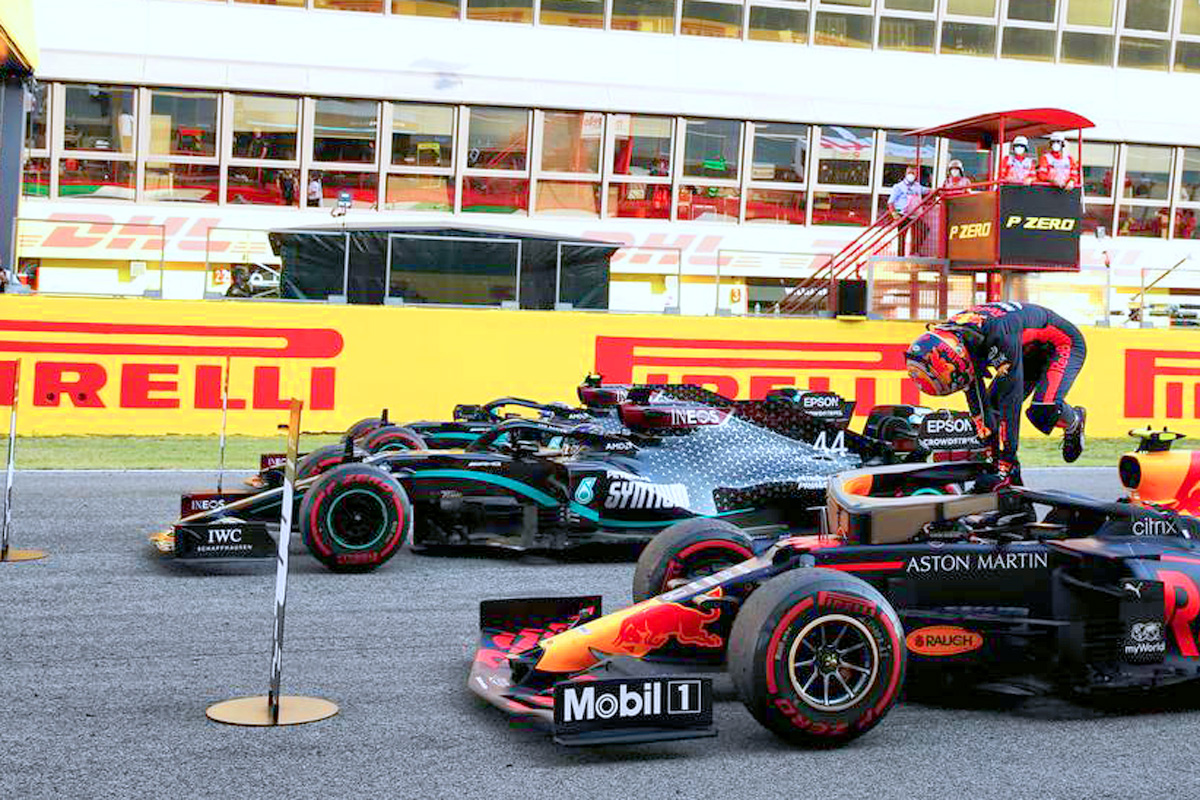 Magnussen: 'Dangerous restart has to be looked at' 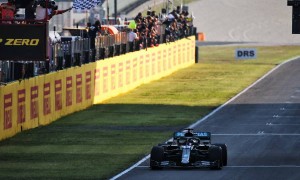 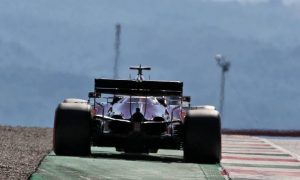