Dutch driver Nyck de Vries has taken an early lead in this year's ABB Formula E championship despite a bumpy first weekend of the season for the Mercedes team.

De Vries was the dominant run-away winner of the first Diriyah E-Prix race on Friday night, with a four-second advantage at the line over Venturi's Edoardo Mortara.

But a high-speed practice accident for Mortara on Saturday morning saw all cars using Mercedes powertrains barred from taking part in qualifying for the second night race.

Mercedes subsequently revealed that 'an incorrect software parameter' had prevented the rear brakes acting as a fail safe when there was a problem with the front brakes.

"Today was tough after yesterday's successful first race of the season,"
said Mercedes team boss Ian James. "Following on from Edo's crash in one of our customer cars, we were unable to take part in qualifying.

"We managed to fix the problem and luckily, nothing happened to him, which is paramount in all of this," he added. "Not taking part in the qualifying badly affected our entire day, as it meant we had to start out on an incredibly eventful race from the back of the field."

De Vries ultimately had to start the race from 20th place on the grid. He crossed the line in 14th, but a raft of post-race penalties for other drivers including Jean-Éric Vergne, Nick Cassidy, Alexander Sims, Norman Nato, Rene Rast and Tom Blomqvist helped see him promoted into the points in ninth.

As a result he leads the championship by seven points from Jaguar's Sam Bird who won Saturday's event.

"Today's race was very frustrating after my maiden win yesterday," he said. Of course, it was a pity that we weren't allowed to take part in qualifying. 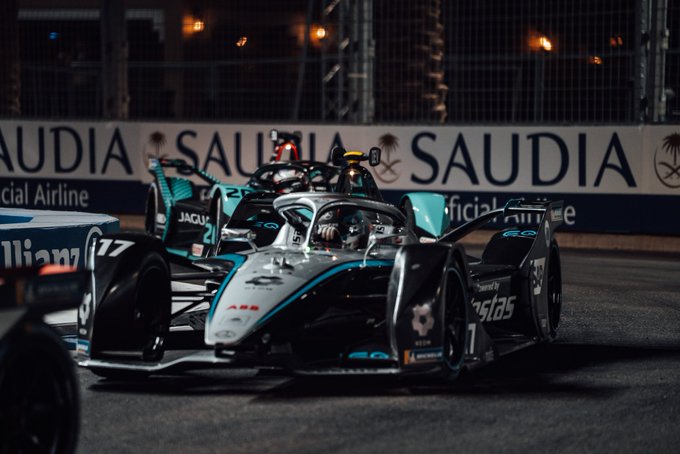 "We were quick right from the start and our pace was strong here today," he said. "Everyone was on a similar strategy and we didn't get very far as a result, but days like this are simply part and parcel of motor racing.

"As for me personally, I felt great. We've got an excellent package and it's a shame that we had so many safety car periods in the end.

"Otherwise, we could have a good showing over the final segment with three percent more energy than our immediate competitors," he said. "We were able to benefit from the penalties after all in the end and come away with three points from today.

"Still we had a very positive weekend,' the 26-year-old concluded. "Those are all things that we can build on."

De Vries' team mate, former McLaren F1 driver Stoffel Vandoorne, was ninth on Saturday and could only manage 13th on Saturday from 22nd place on the grid.

"I'm coming away from the track with mixed feelings," he said afterwards. "We had a good start to the season yesterday with Nyck's win and my charge up the field and into the points.

"Saturday was tough, as we couldn't take part in qualifying. Moving forward in the race was very difficult, and so unfortunately, we came away empty-handed.

"All in all, though, I feel confident about the future. We've got a good package and a strong car - that's what matters. We'll now have to strike back at the next race in Rome."