Charles Leclerc went for a spin in the final round of qualifying for the Spanish Grand Prix, but the Ferrari driver held his nerve to put in a follow-up lap that claimed pole by 0.323s from Max Verstappen whose Red Bull suffered a power issue in the final seconds.

Carlos Sainz will start tomorrow's race from third place, from where he will share the second row with George Russell whose competitive performance confirmed that Mercedes are firmly back in the mix this weekend.

Both Sebastian Vettel and Fernando Alonso failed to make the cut at the end of Q1, while McLaren's Lando Norris had his fastest Q2 lap time deleted for exceeding track limits. That left him short of making it through to the final round and having to settle for P11 on Sunday's grid.

Everyone had been feeling the heat in the sun-drenched paddock at the Circuit de Barcelona-Catalunya on Saturday - it was 34C air temperature and a sizzling 47C on the track. It had already been literally too hot to handle in the case of Pierre Gasly, whose car had gone up in smoke in the AlphaTauri garage early in final practice, as well as Mick Schumacher with his dramatic rear brake fire on the Haas. Both teams had to work hard over the break to get the cars patched up in time for the start of qualifying.

Elsewhere the rising temperatures were more metaphorical: Ferrari's Charles Leclerc might have completed a clean sweep of all three practice sessions, but Red Bull's Max Verstappen had been only 0.072s behind while George Russell continued to signal a Mercedes renaissance just 0.076s further adrift. When it came to qualifying, the matter of pole position was clearly still far too close to call. 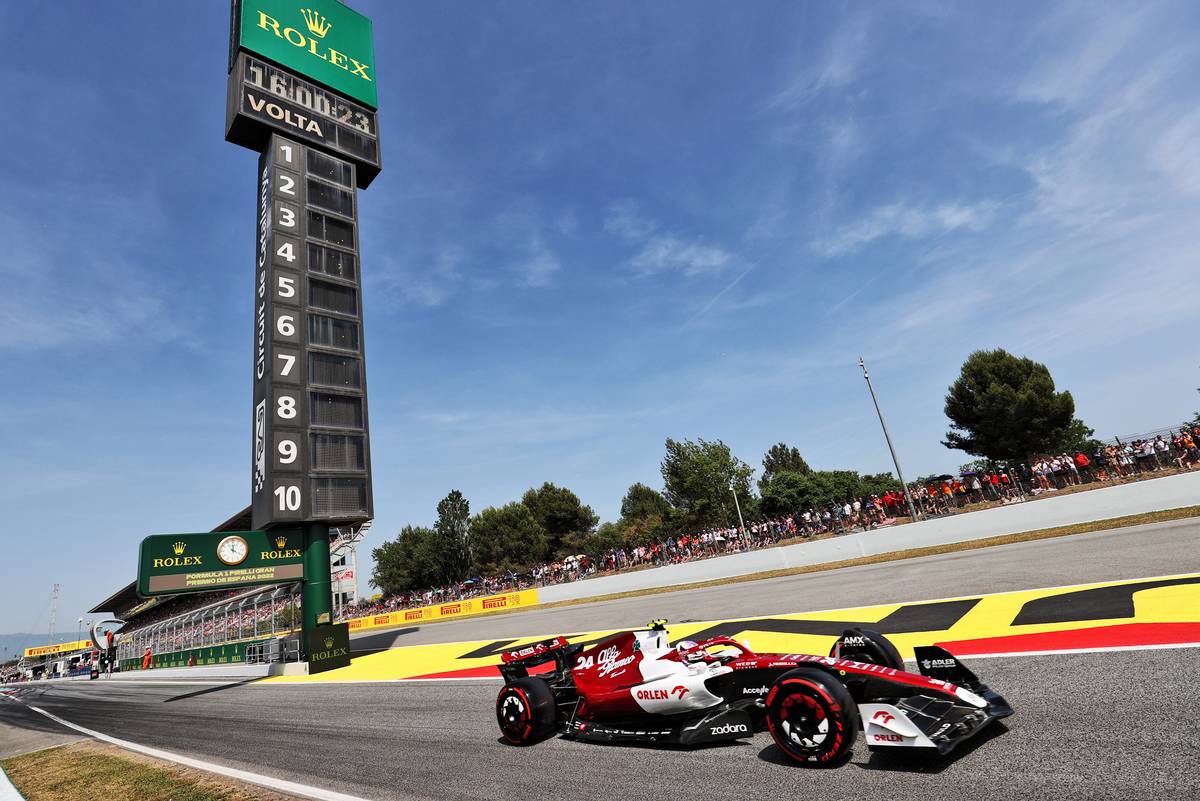 Q1: Leclerc and Sainz in charge as Vettel and Alonso miss the cut

First out on track when the lights at the end of pit lane went green was Alfa Romeo's Zhou Guanyu together with the two AlphaTauris of Gasly and Yuki Tsunoda, all on soft tyres. Gasly's car was still sending up smoke signals on its out lap, but the team seemed unconcerned and he went on to set a first flying lap time albeit half a second behind Zhou's 1:21.065s.

Perez was also in action, going six tenths quicker than the Chinese rookie before being usurped in turn by his team mate Verstappen setting a time of 1:20.091s. By now the track was filling up as the rest of the cars headed out, including Schumacher whose VF-22 had undergone a precautionary gearbox change after its FP3 drama.

Leclerc soon took up his customary position atop the timesheets with a first run of 1:19.861s putting him 0.031s ahead of Sainz, while Russell was the best of the two Mercedes drivers at this early stage settling into fourth behind Verstappen and ahead of Lewis Hamilton and Valtteri Bottas, pushing Perez down to seventh as the field headed back to pit lane for a change of tyres ahead of their second runs.

At the other end of the times, the five drivers at risk of elimination included Gasly and Schumacher together with Williams pair Alexander Albon and Nicholas Latifi, as well as Aston Martin's Lance Stroll. If any of them could improve then the driver on the bubble and at risk of being pushed out was McLaren's Daniel Ricciardo in 15th.

Schumacher duly impressed with his final flier putting him safely into the top ten, and his team mate Kevin Magnussen also shot up to fifth with his next effort. Similarly improving was Gasly, leaving Ricciardo briefly in the drop zone until he too dug deep to spring into the safety of tenth place, with his team mate Lando Norris slipping through in 14th. Caught out by this turn of events and finding themselves stuck on the sidelines with Stroll, Albon and Latifi were Aston's Sebastian Vettel ("you must be kidding!" he replied to his race engineer when informed) and Alpine's Fernando Alonso (who had got held up in traffic by Norris on his out lap). 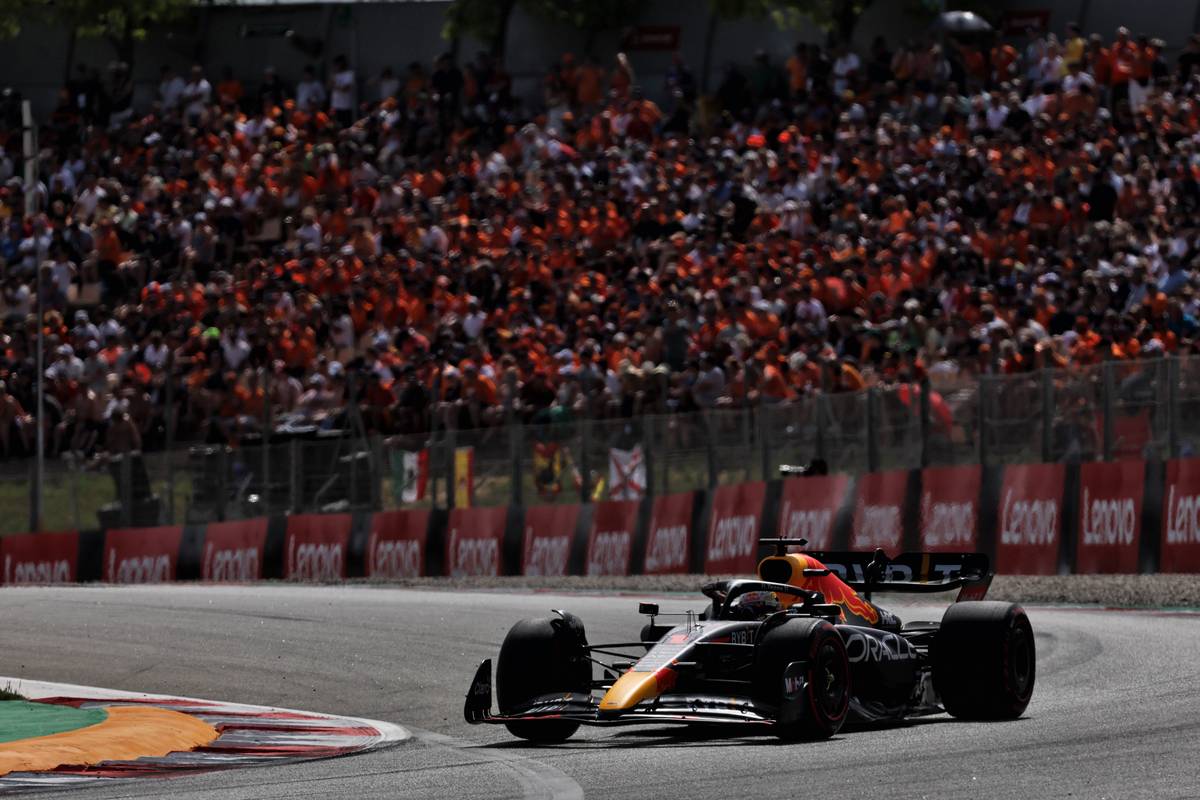 Q2: Verstappen and Sainz top after Mercedes and Leclerc sit out second runs

There was a brief delay before the teams responded to the green lights at the end of the pit lane, with drivers preferring to head out in two-by-two formation with their team mates perhaps with an eye to setting up a tow if the opportunity presented itself. The two Mercedes took first honours, Russell's 1:19.470s proving three tenths quicker than Hamilton who had had a bit of a scare going through turn 15. It confirmed that the Silver Arrows were very much back in the running for pole contention.

Their times were certainly better than Perez, Leclerc, Bottas, Verstappen and Sainz could manage. However Leclerc, Verstappen and Sainz had all opted to make their first run on used tyres, while the others - including Russell and Hamilton - had gone straight out on fresh sets of softs. Those currently outside the top ten and under pressure to improve to make it into Q3 were Ricciardo, Ocon, Zhou, Tsunoda and Gasly.

As the cars headed out again, word came down from race control that any hijinks on pit lane with drivers jockeying for position and attempting to eke out space before starting their runs would not be tolerated. The two Mercedes drivers opted out of this scenario altogether and remained on pit lane, and Leclerc was also feeling confident enough with his initial lap time to sit things out.

That gave Sainz the opportunity to put his new set of tyres to best use and go top albeit by just 0.017s from Russell, but he was quickly toppled by a robust lap from Verstappen putting the Red Bull ahead by almost a quarter of a second on 1:19.219s. Other drivers were struggling to improve on their earlier times, but Magnussen was once again able to jump up the timing screens to fifth ahead of Perez, Leclerc and Bottas, followed by better laps from Ricciardo and Schumacher.

Norris thought he had done enough to get through, only to be told by his race engineer that his final lap had been deleted for fractionally exceeding track limits at the sweeping turn 12 leaving him 11th. It's the first time this season he has been out-qualified by Ricciardo. Joining the young Brit in taking no further part in the session were Ocon, Tsunoda, Gasly and Zhou. 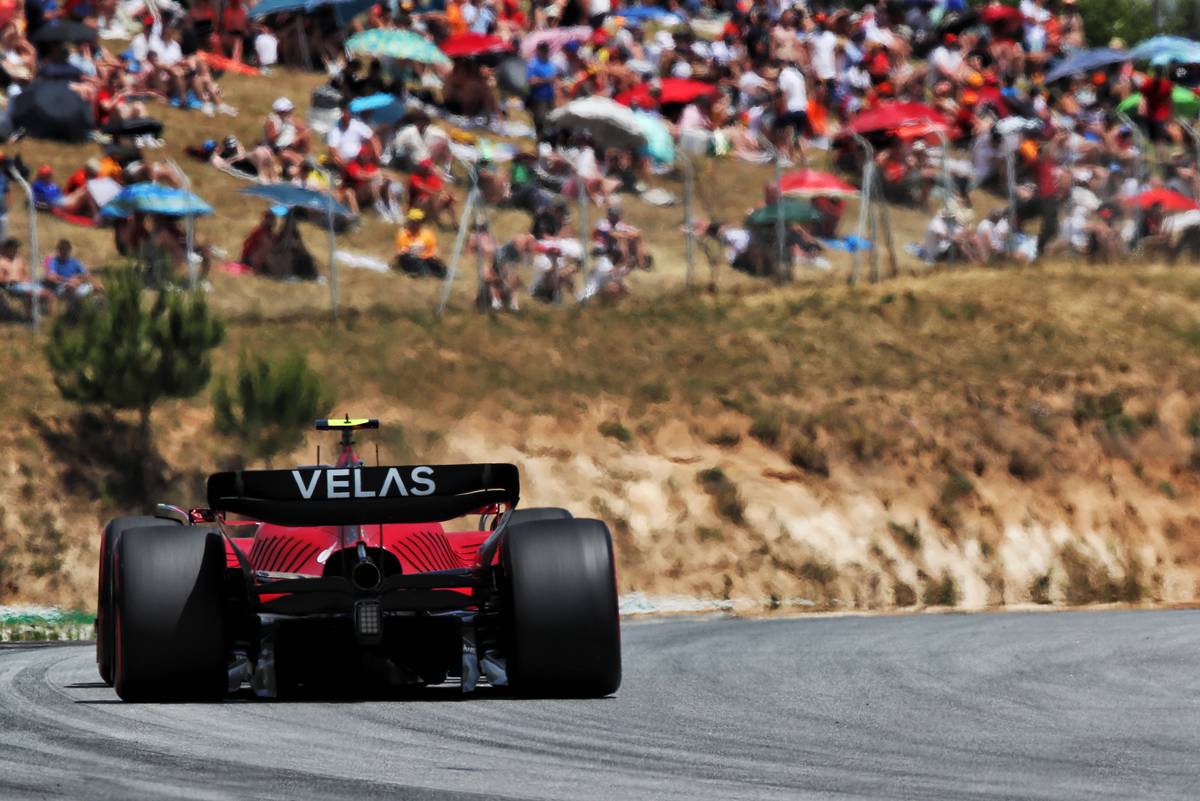 Q3: Leclerc recovers from spin to take pole ahead of Verstappen, Sainz and Russell

Having got both cars through to the final top ten pole shoot-out round, Haas dispatched Magnussen and Schumacher as soon as the track went green at the start of Q3 for an initial lap on used tyres. Behind them it was fresh tyres all round for the Ferrari, Mercedes and Red Bull contenders.

Magnussen's 1:21.351s was the first time on the board but this paled in comparison to Hamilton's 1:19.664s. Even this was soon bettered by both Sainz and Russell. Verstappen looked to be struggling to find that sort of pace from the Red Bull, but a phenomenal final sector saw him claim provisional pole with a time of 1:19.073, three and a half tenths quicker than Sainz with Perez also flying to third place ahead of Russell.

Missing from the line-up was Leclerc, who appeared to have overcooked his run into turn 15 which resulted in losing the back end of the Ferrari and going for a spin. After gathering himself together, Leclerc returned to pit lane without setting a time. Fortunately it was far from the end of the story, with plenty of time for everyone including Leclerc to make another all-or-nothing attempt before the chequered flag.

Keenly aware of the risk of yellow or red flags leaving him without any flying lap on the board at all, Leclerc wasted no time heading back out on a brand new set of tyres. He pushed for all he was worth, including setting the fastest middle sector of anyone, and successfully planted the Ferrari on pole with a time of 1:18.750s. Verstappen meanwhile was alerting the pit wall of a loss of power on the RB18 putting him out of the running, although his existing time was still good for second and a share of the front row tomorrow.

Sainz wasn't able to oust Verstappen and settled for third place, while Russell's final run saw the Mercedes driver snatch P4 from Perez and Hamilton. The remainder of the top ten consisted of Bottas, Magnussen, Ricciardo and Schumacher. 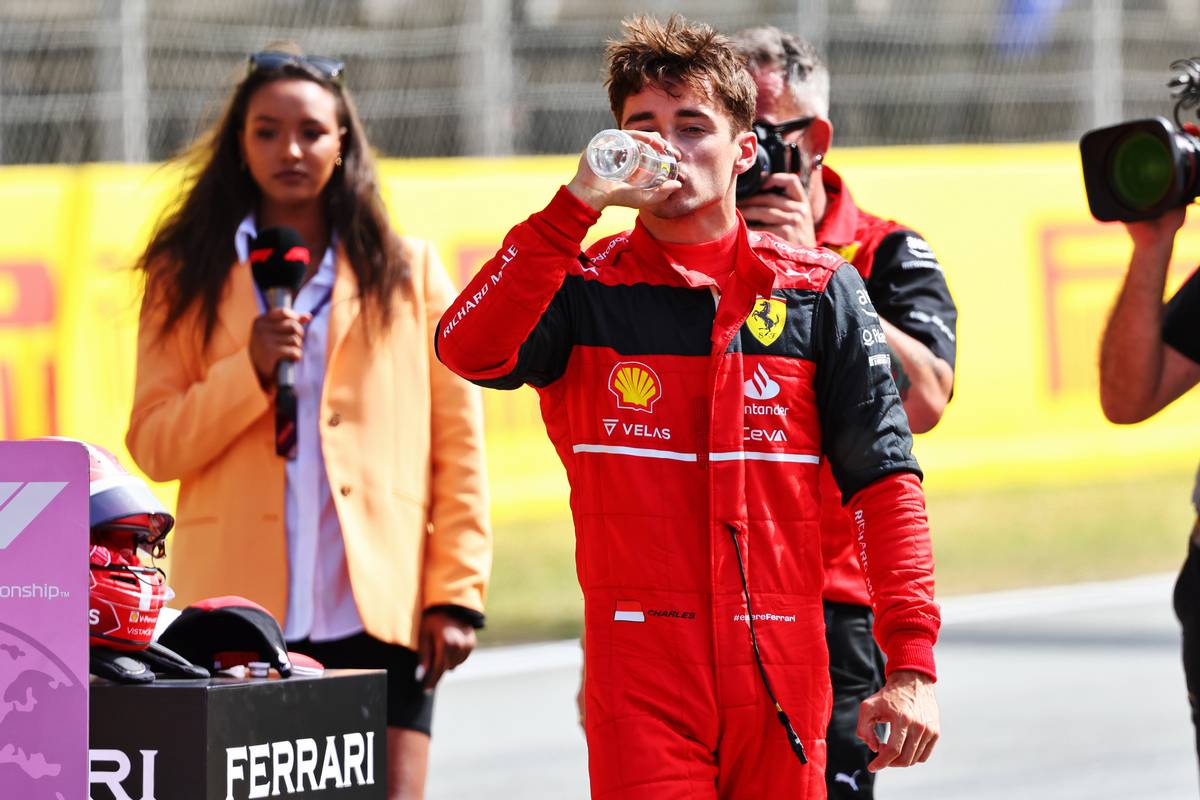