Max Verstappen has greatly matured as a driver over the years, but Martin Brundle says events in Barcelona proved that the Red Bull charger's temper "still has a relatively short fuse".

Verstappen took his fourth win of the season at the Spanish Grand Prix after an engine issue ruled out early race leader and championship rival Charles Leclerc.

But the Dutchman encountered problems of his own in the scorching hot race, veering off course at Turn 4 and then battling a recalcitrant DRS on his car that appeared to have a mind of its own.

During several laps, as he was running in the wake of the Mercedes of George Russell, Verstappen grew increasingly frustrated with his DRS dysfunction and his inability to gain the upper hand over the Briton.

In his post-race column for Sky Sports, Brundle explained how he interpreted the Dutchman's radio rants.

"Max’s 24th victory, matching the great Fangio, wasn’t his finest, partly due to a malfunctioning DRS rear wing flap, also a trip through the turn 4 gravel when a gust of wind caught him out, and furthermore twice being let through by team-mate Sergio Perez," Brundle wrote.

"Max was clearly angry on the radio at his team when the DRS wouldn’t work, which was hindering his passing of the ever-impressive Russell in the Mercedes.

"This tells us two things. He’s rather fed up with a catalogue of reliability issues as the team have taken time to finesse and get their new car up to full speed, and down to the weight limit.

"Secondly his temper still has a relatively short fuse, as we saw for example in the brake testing of Hamilton in Saudi Arabia last year, which he has otherwise learned to control well in his quest for victories and a first World Championship." 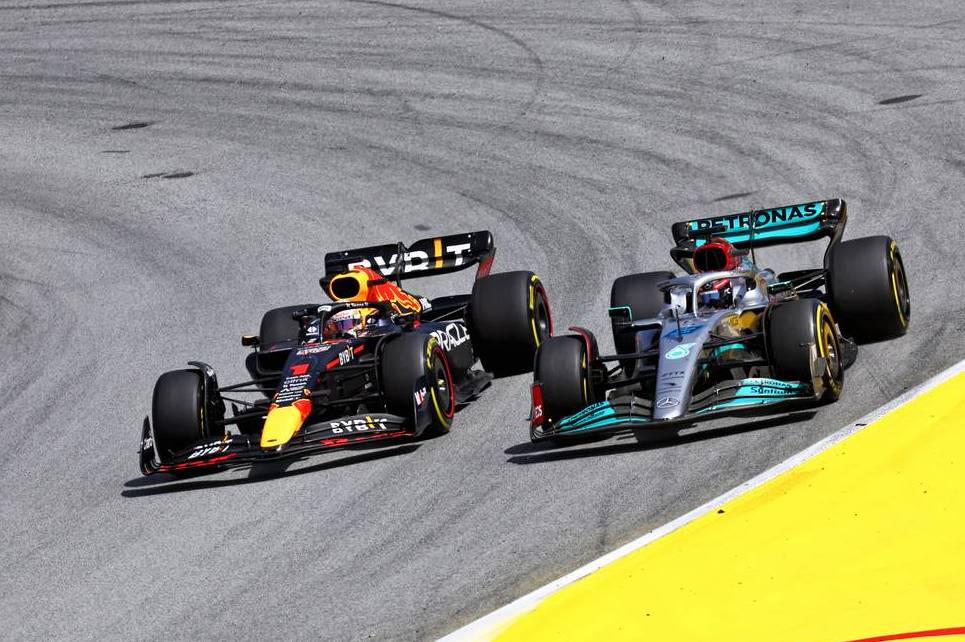 However, while noting Verstappen's temperament, Brundle also observed that the latter's wheel-to-wheel battles with his rivals have become less contentious.

"It was fascinating to witness his first proper wheel-to-wheel battle with Russell who was defending robustly but fairly, and very well," added the former F1 driver.

"I happened to cross the race stewards on Sunday evening and they were of the same opinion that George was pushing the boundaries but not breaking the rules. And his run back past Max between the very short turns one and two will be played out for a good while.

"Once again Max was very clean and fair in this enduring battle, more so than when he was against Hamilton last year, which is more fitting of a champion.

"But of course the championship is not up for grabs yet."