Baku's street circuit is often described as a mix between two extremes, Monaco and Monza, thanks to the old town's narrow and twisty section and to its long straights and heavy braking zones.

But unlike in the Principality where F1 raced last time out, Baku requires a set-up balance weighted more towards straight-line speed than aerodynamic efficiency.

Baku's speed trap is located on the track's huge 2.2km main straight, just before the pits. But drivers reach maximum velocity a little further down the road.

However, we'll discard the latter as a reference as a car's top speed at that point is often impacted by the tow it may or may not have received along the way.

From the outset, the Alpine's of Fernando Alonso and Esteban Ocon have topped the speed trap numbers in Baku, a result that has stunned a few drivers who fear that the pair, who qualified respectively P10 and P13 on Saturday, will make gains early on in the race and then hold their own thanks to their car's maximum velocity.

Perhaps more noteworthy is the small advantage held by Red Bull over archrival Ferrari in the top speed department and which could play out in favour of the bulls once again, at least if normal circumstances prevail which has rarely been the case in Baku.

Finally, both Mercedes drivers, in addition to complaining about their bouncing and bumpy ride onboard their W13 also singled out their car's dismal top speed.

That was verified once again in qualifying, with Lewis Hamilton and George Russell rushing down the straight with a 10 to 13 kph deficit to the fastest cars in the field. 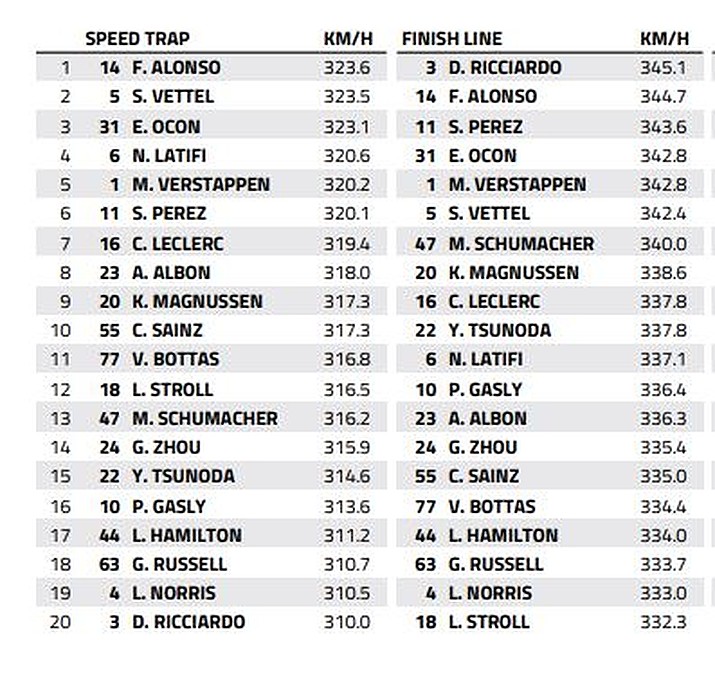