Charles Leclerc maintained Ferrari's hold on the top of Friday's practice timesheets at the Hungaroring, setting the pace with a time of 1:18.445s on the soft compound.

But McLaren was also looking swift, with Lando Norris proving second quickest ahead of first practice pacesetter Carlos Sainz, and Max Verstappen fourth for Red Bull ahead of Daniel Ricciardo.

Fernando Alonso continued to show pace in sixth, but Mercedes were struggling to find grip with George Russell only ninth and Lewis Hamilton unhappy to finish in 11th and a full second adrift of Leclerc's top time.

Man of the moment Sebastian Vettel was first out on track when the lights at the end of pit lane went green to get the second practice for the Hungarian Grand Prix underway/ He was accompanied by his Aston Martin team mate Lance Stroll with both men starting the session on the medium compound. That was also the choice for Ferrari and Red Bull, as opposed to McLaren's Daniel Ricciardo and Lando Norris who set off on the hard tyres as did Esteban Ocon, while Alex Albon struck out on softs in the Williams. 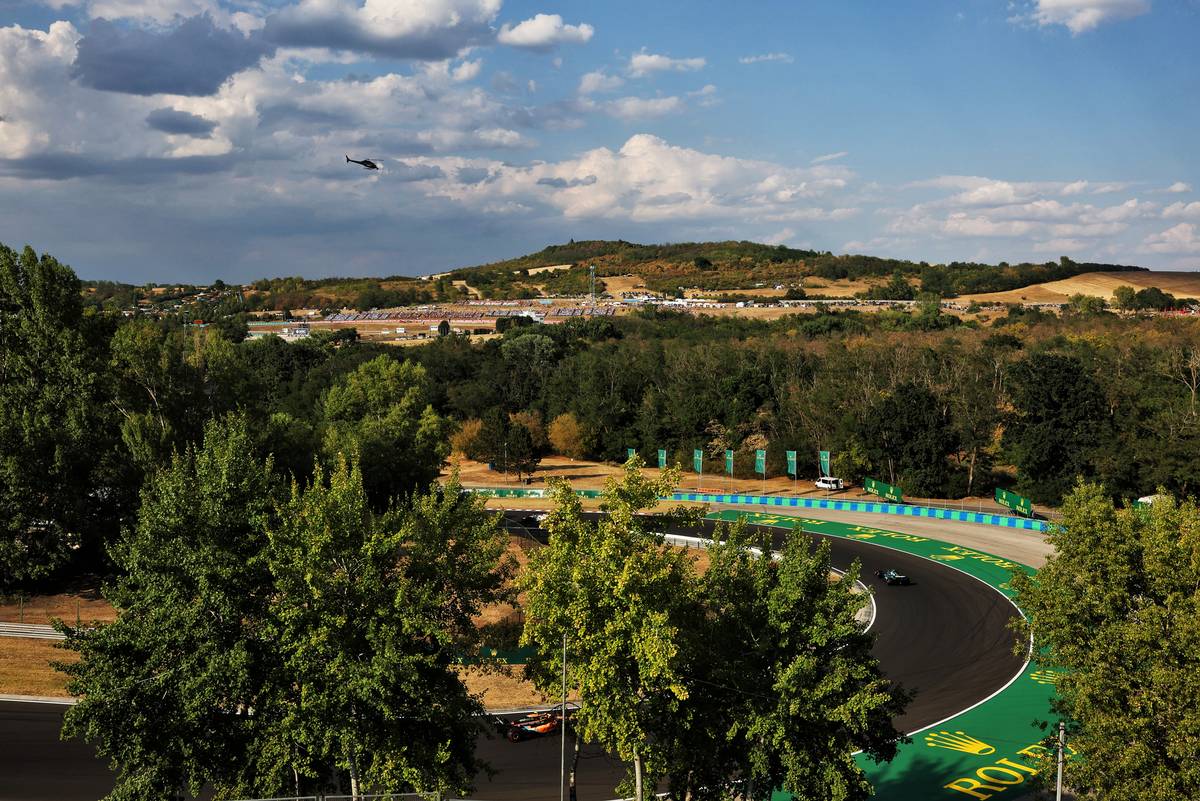 Vettel pitted before setting a time and the early honours went to the man who had topped FP1, with Ferrari's Carlos Sainz posting a lap of 1:20.487s which was eighth hundredths quicker than Red Bull's Sergio Perez. Charles Leclerc then assumed control with a time of 1:18.911s, three quarters of a second ahead of championship leader Max Verstappen, with Fernando Alonso slotting into third in the Alpine. Albon's soft tyres put the Thai driver into sixth ahead of Haas' Kevin Magnussen and the Mercedes duo of Lewis Hamilton and George Russell, with Hamilton disturbed to be almost a full two seconds off the Monegasque at this early stage.

Sainz was soon able to leapfrog Verstappen to move into second but he remained six tenths off his team mate's benchmark. Everyone was now out on track and jostling for space to make a clean run, with Sainz soon able to shave a couple of tenths off his time but still nowhere near quick enough to match Leclerc even before he ran off into the dirt on turn 5 with no harm done. Verstappen and Perez were up to third and fourth ahead of Alonso and Valtteri Bottas, followed by Lance Stroll and Zhou Guanyu with Albon still hanging on just in the top ten. The AlphaTauri cars of Pierre Gasly and Yuki Tsunoda were best of the rest followed by Magnussen and Hamilton who hadn't improved on their initial times, Hamilton aborting his latest hot lap and heading to pit lane instead.

All the drivers soon followed suit to facilitate a change to the soft compound, Russell the first to head back out only to lock up at turn 1 at the start of his push lap. That immediately flat-spotted the red-walled C4 tyres, although he was able to go on and post the fourth fastest time moments later. Meanwhile Albon had taken on a second set of softs but to no greater effect as the Williams locked up and spun before coming to a halt at the same corner, triggering a brief flutter of yellow flags before he got going again. 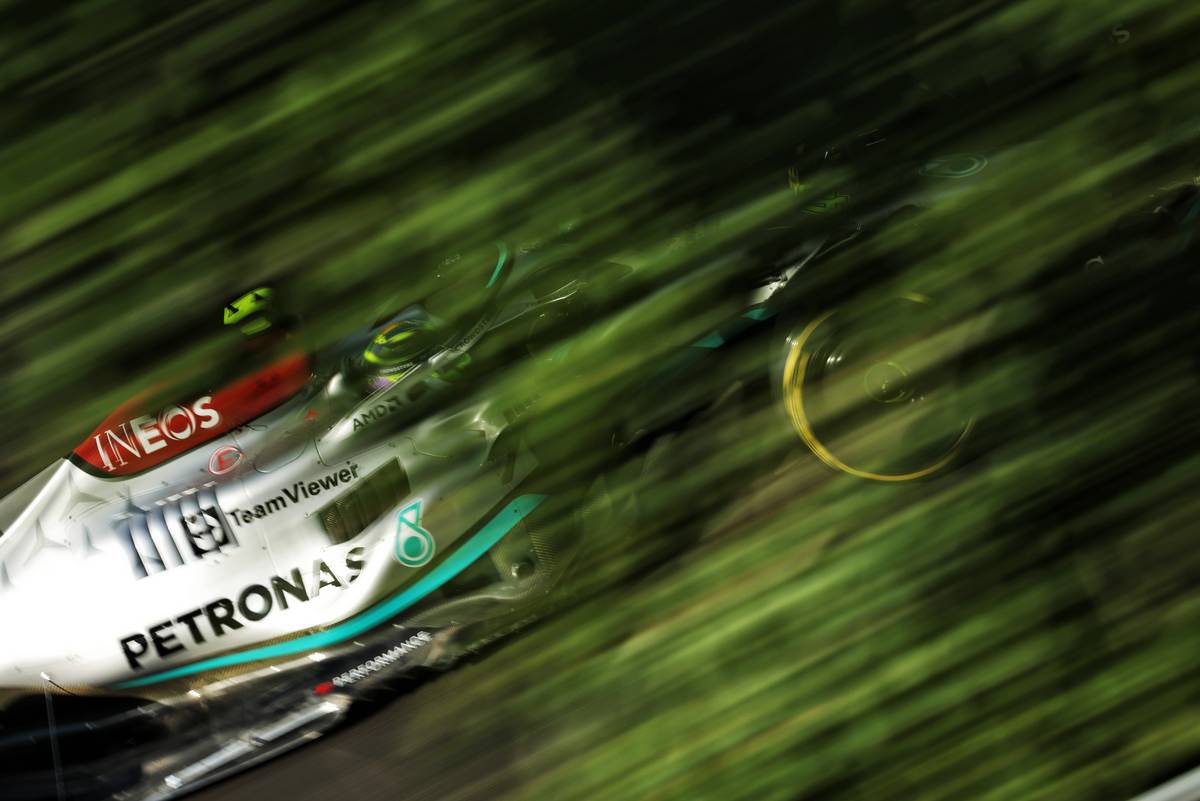 Fortunately Norris did a better job on the softs and leapt to the top with a time of 1:18.662s despite running wide at the final exit and throwing up a load of dirt onto the racing line - although on this occasion his lap was not deleted for exceeding track limits. Alonso, Vettel and Hamilton also found more speed, but it was Leclerc who found sufficient extra pace to reassert his control of the session with a time of 1:18.445s. Ricciardo joined the party in third place, but Sainz meanwhile was grumbling about Nicholas Latifi in turn 4 - "Traffic with a stupid guy, think it's a Williams" - as he was forced to back off on his latest run, before trying again and successfully splitting the two McLarens by going third ahead of the Aussie.

While a new time from Verstappen was good enough to take fourth, things were not looking good for Mercedes. Russell complained that he simply couldn't navigate himself around turn 1, and Hamilton also locking up on his latest run leaving him a disappointing ninth place. Russell did manage to go quicker, and soon the seven-time world champion had dropped out of the top ten altogether with his next lap thwarted by traffic.

Second-place man Norris was back out again but he and Ricciardo had now switched back to their original sets of hard tyres as McLaren began their long distance race simulation work. Norris got a tactful reminder from his race engineer not to keep straying over the kerbs in order to protect the MCL36's floor from damage. Meanwhile with 20 minutes remaining on the clock, Leclerc had been called back in to the Ferrari pit after nine laps on the soft compound and a tension in the team radio exchanges suggested a concern over a possible technical issue that they needed to check out as the F1-75 was wheeled back into the garage. 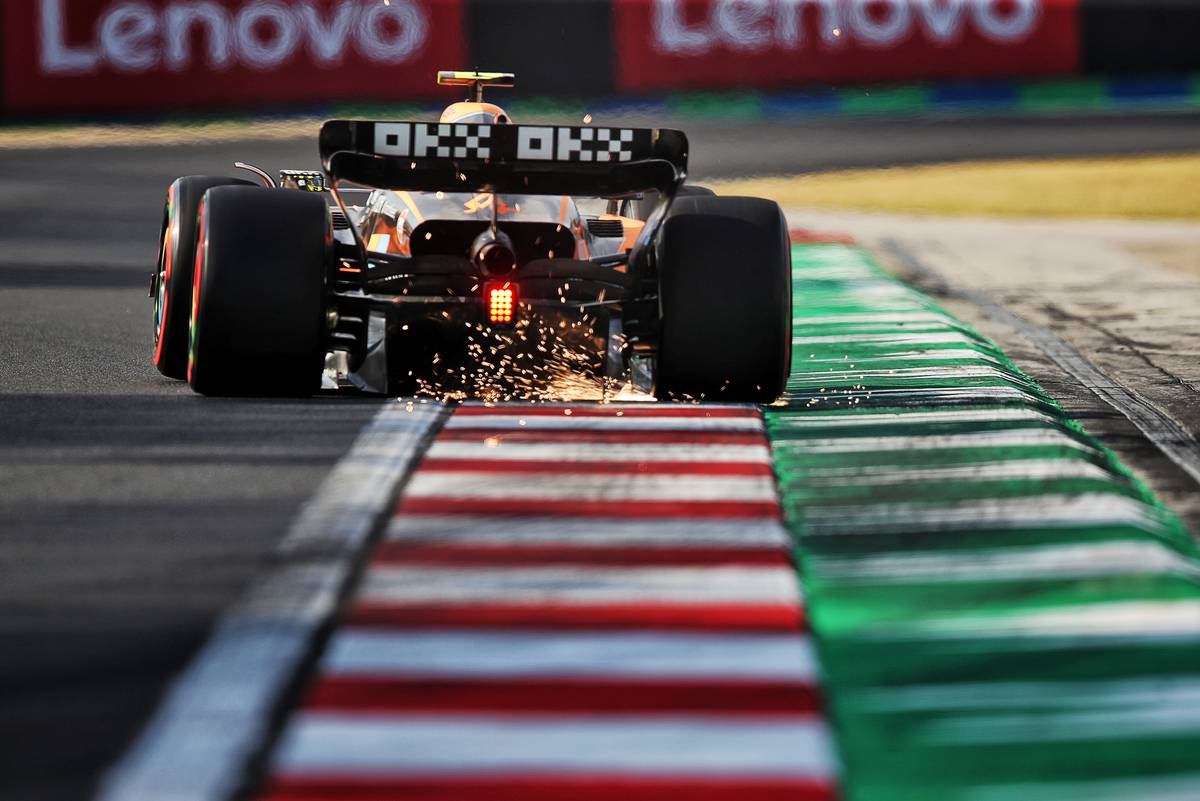 Most of the drivers were now on medium tyres, but Norris and Ricciardo went against the flow by going back to the soft tyres, as did Sainz. It suggested that tyre strategy for the rest of the weekend was still very much in flux, especially given the weather forecasts. Although today's sessions has been dry and sunny and hot (although not nearly as scorching as last week in France), there had been a little more cloud in FP2 than there had been in FP1 - perhaps a warning sign of the predicted rain and storms set to hit the Hungaroring from the early hours of Saturday, and into final practice and qualifying in the afternoon.

The session saw no major incidents as it wound to a close, but that wasn't to say it was plain sailing. Verstappen reported "These oscillations, they are a joke!" while Hamilton ran wide on turn 4 with the wind making the cars a handful at certain points. Meanwhile Leclerc was back out on track, but only after hitting a jack on his way out of the garage leaving the Ferrari mechanics to do additional checks for damage before releasing him.

The order at the top remained unchanged, with Leclerc quickest ahead of Norris, Sainz, Verstappen, Ricciardo, Alonso, Vettel, Russell, Perez and Bottas. Hamilton remained mired in 11th ahead of Zhou, Ocon, Stroll, Gasly, Magnussen, Schumacher, Latifi, Tsunoda and Albon, whose session had been somewhat curtailed by that lock-up and spin.