Starting from 14th on the grid did little to stop Max Verstappen's march to a dominant victory in today's Belgian Grand Prix, taking just a dozen laps to cruise his way into the lead for the first time, and from there to his ninth win of the season.

Verstappen finished the race 17 seconds ahead of his Red Bull team mate Sergio Perez by the chequered flag, despite the Mexican having started from the front row.

Ferrari simply didn't have the speed to compete this weekend, and pole sitter Carlos Sainz had to settle for third place after managing to hold off Mercedes' George Russell in the closing laps.

Lewis Hamilton retired after clashing with Fernando Alonso on the opening lap of the race, while Charles Leclerc managed to fight his way back to fifth only to incur a costly post-race pit lane speeding penalty to leave him in sixth, and a daunting 98 points behind in the drivers standings. 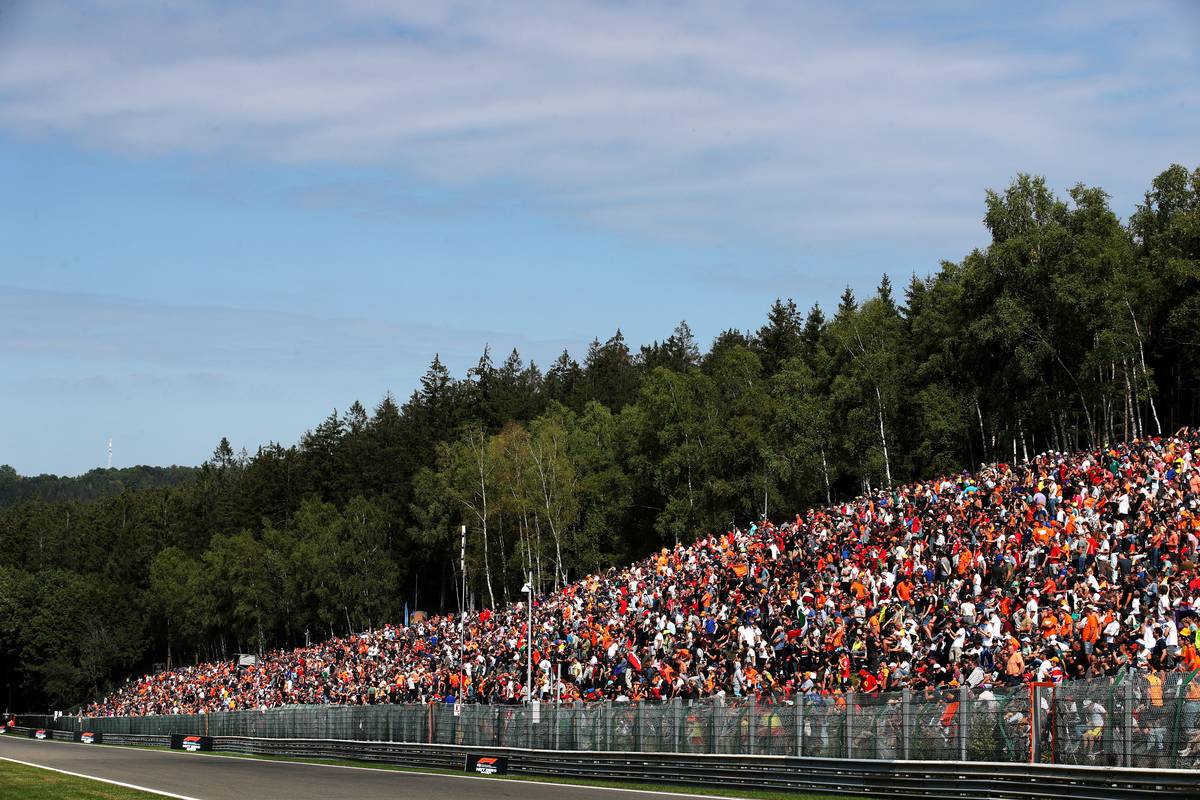 Spa-Francorchamps was looking a lot brighter and feeling a lot warmer than it had the previous day, and there was no chance of any rain on Sunday. The weather wasn't the only thing to have undergone an overnight shake-up, with the grid for the Belgian GP looking very different from the order the drivers had finished in qualifying thanks to a slew of grid penalties for various power unit changes.

With Max Verstappen relegated to 14th place on the grid just ahead of his title rival Charles Leclerc, both of them opting to start on soft tyres, it was Ferrari's Carlos Sainz - surprisingly also starting on the softs - who had inherited pole and led the field to the grid. Those behind him - Red Bull's Sergio Perez, followed by the Alpine of Fernando Alonso and the two Mercedes drivers Lewis Hamilton and George Russell in fourth and fifth respectively - had all opted to start on mediums.

Somewhat out of place in sixth was Alex Albon, but the Williams driver had thoroughly earned his Q3 appearance yesterday and been duly rewarded by a three place promotion on Sunday. But missing from the grid were the two AlphaTauris, Yuki Tsunoda obliged to make a pit lane start after changing power unit components overnight, and Pierre Gasly joining him after an electronics issue was detected on the installation lap.

When the lights went out, the cars plunged down into the La Source hairpin which has been the cause of much carnage and consternation in the past. This time everyone got through in one piece but it had been a terrible start for Perez who was jumped by first Alonso and then by Hamilton and Russell. Alonso continued to scrap with Hamilton going up Eau Rouge, and contact was inevitable with the rear of the W13 briefly lifted high into the air over the kerbs. 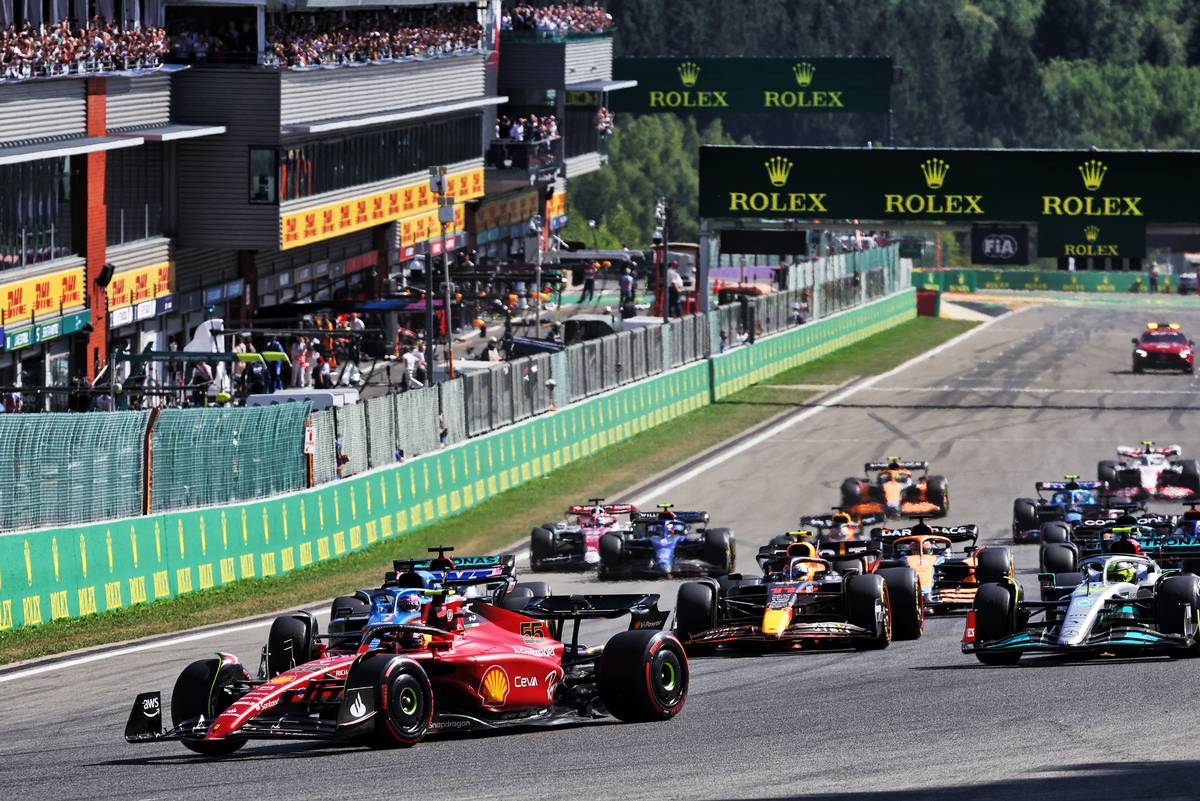 Alonso survived the encounter but Hamilton had sustained heavy damage. He attempted to limp home to the pits but was going so slowly that he was holding up the rest of the field, until the Mercedes pit wall ordered him to stop immediately and make his way back to pit lane on foot. "Looking back at the footage, he was in my blind spot and I didn't leave enough space so it was my fault today," admitted Hamilton. "Just sorry to the team."

Verstappen and Leclerc were also busy battling for position, Leclerc briefly going astray but able to continue. Nicholas Latifi was less fortunate as the Williams ran wide and spun into the path of birthday boy Valtteri Bottas, who was sent into the gravel where the Alfa Romeo became beached. It forced race control to scramble a safety car for the stricken car to be recovered while Latifi headed to pit lane, where he was joined by Leclerc who took a new set of medium tyres while the engineers cleared out tear-off that had got stuck in the Ferrari's cooling duct.

Sainz continued to lead at the restart, with Perez having successfully popped back into second place in the aftermath of the Alonso/Hamilton incident. Russell was now running in third ahead of Alonso, followed by Sebastian Vettel and Daniel Ricciardo who had both succeeded in getting ahead of Albon. Lance Stroll and Kevin Magnussen rounded out the top ten. 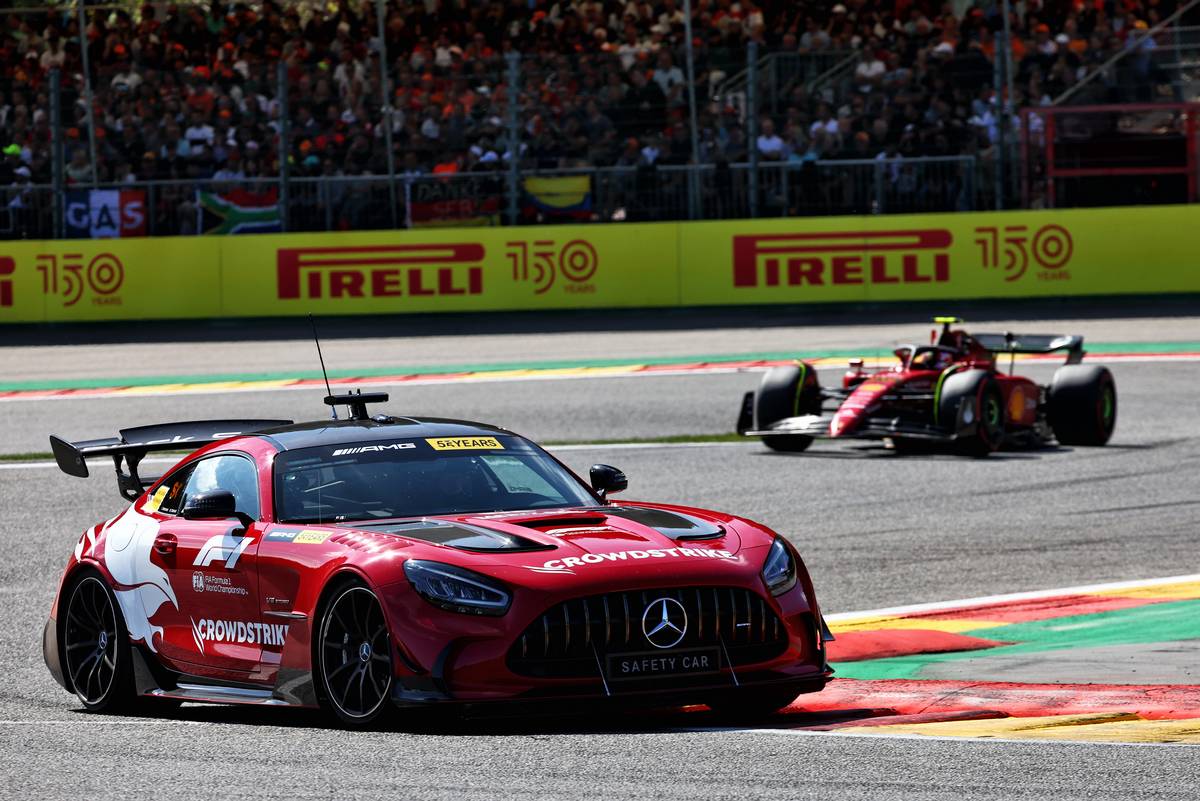 Before they could get going, Sainz locked up at the bus stop allowing Perez and Russell a slight chance of attacking down into the hairpin. In the end everyone held station and the race was underway again. Sainz soon pulled out of DRS range of Perez with Russell dropping back from the lead pair. By lap 8 he found himself in the crosshairs of Verstappen who was already back up to fourth place - and it didn't take him long to put the Mercedes to the sword as well, putting him into a potential podium position

He had put those soft tyres to perfect use but was now was starting to pay the price with heavy degradation. Sainz was also experiencing similar problems in the lead of the race. He stayed out to lap 12 before pitting for mediums, leaving the Red Bull team mates Perez and Verstappen to fight it out over the lead. No team orders seemed to be involved, but Verstappen needed no help in taking control of the race. Meanwhile Sainz had come out in traffic and was held up for several corners before finally taking care of Ricciardo and Stroll to move into fifth behind Vettel, who was also swiftly taken care of. With Russell pitting on lap 14, Sainz was soon back into third place behind the two Red Bulls - but he was now 14 seconds behind the leader with Ferrari seemingly having no answer to their rival's overwhelming pace today.

Having dropped back with his pit stop, Leclerc was now making fast progress. Although he was only 14th after passes on Gasly on lap 8 and then Tsunoda on lap 9, the pit stops of cars ahead meant that he was up to fifth place by lap 15. Perez was next to pit, dropping the Mexican to fourth when he came back out, and he defended hard against Leclerc. Verstappen was in next time round, allowing Sainz to retake the lead as the Dutch driver came back out in second running ahead of Perez, Leclerc and Russell. The top five were now all on mediums, with at least one more stop to undertake before the finish. 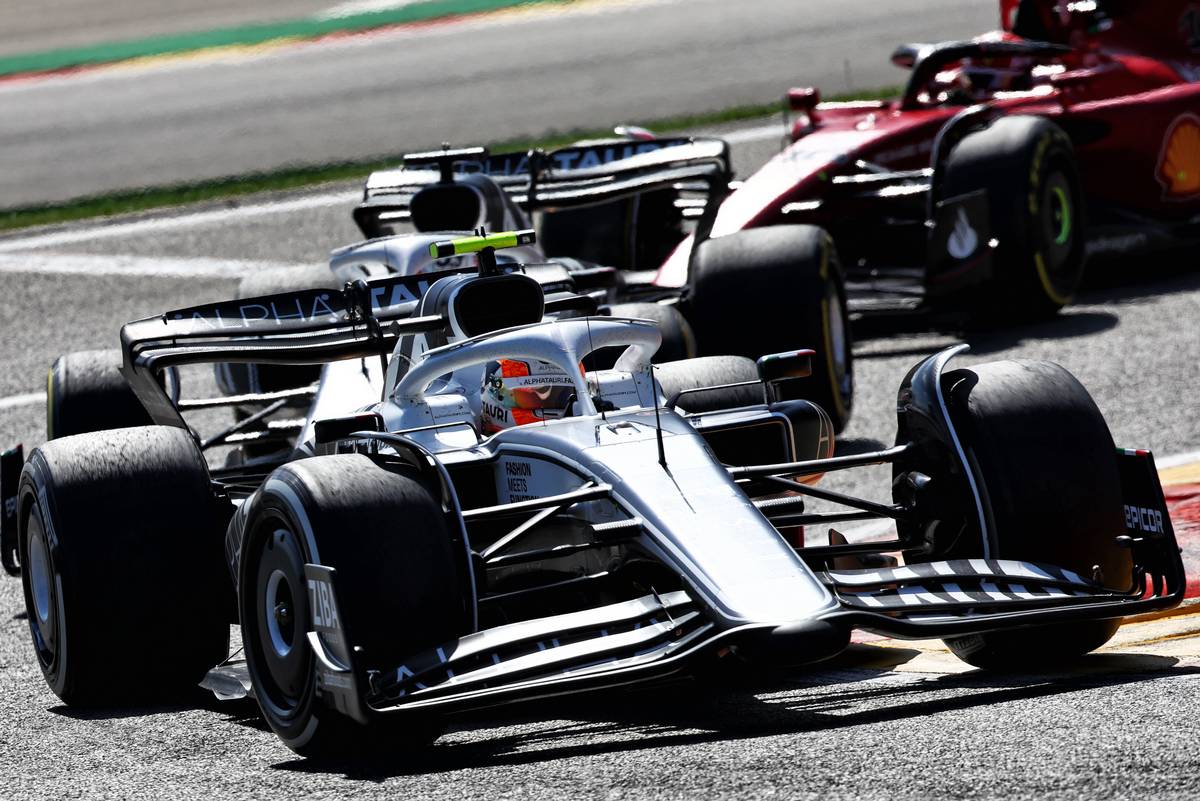 Encouraged by Tsunoda faring well on his opening set of hard tyres, a number of drivers in the midfield including Vettel, Albon, Esteban Ocon and Daniel Ricciardo had all switched to that compound in a clear attempt to make it to the finish. The white-walled tyre was certainly proving much better in today's warmer conditions than it had throughout practice. Tsunoda made it to lap 18 before finally pitting for the first time - the last driver to make a stop - to take on a set of mediums.

By now Verstappen had used his fresher tyres to close up on the back of Sainz. He duly blasted past the Ferrari in the run up to Raidillon, immediately pulling out a clear gap to deny the Spaniard any chance of fighting back with DRS. Moments later Perez arrived on the scene and repeated the dismissal of the Ferrari with equal ease. As Verstappen grew his lead over Perez to ten seconds, Sainz continued to hold a five second advantage over Russell in turn with Leclerc a further ten seconds in arrears. There was a similar margin back to Alonso, Vettel and Ocon while Albon continued to run in the top ten with Ricciardo holding on for dear life in tenth to retain the crucial slipstream. Even with DRS the McLaren was struggling to find the pace to pass the Williams - and indeed was finding it hard work just fending off Stroll through Eau Rouge on lap 24.

Lap 26 saw Sainz pit for a second time with Ferrari virtually double stacking Leclerc. Sainz opted to complete the race on the hard compound while Leclerc stayed on the mediums. Despite a well-executed stop, Sainz was now down in fourth and Leclerc in seventh having fallen behind Vettel and Ocon. Alonso also pitted but it turned out poorly for him, as he emerged in heavy traffic in 11th place leaving him calculating a move on Alfa Romeo's Zhou Guanyu and then swiftly passing the strangely lacklustre McLaren of Lando Norris. 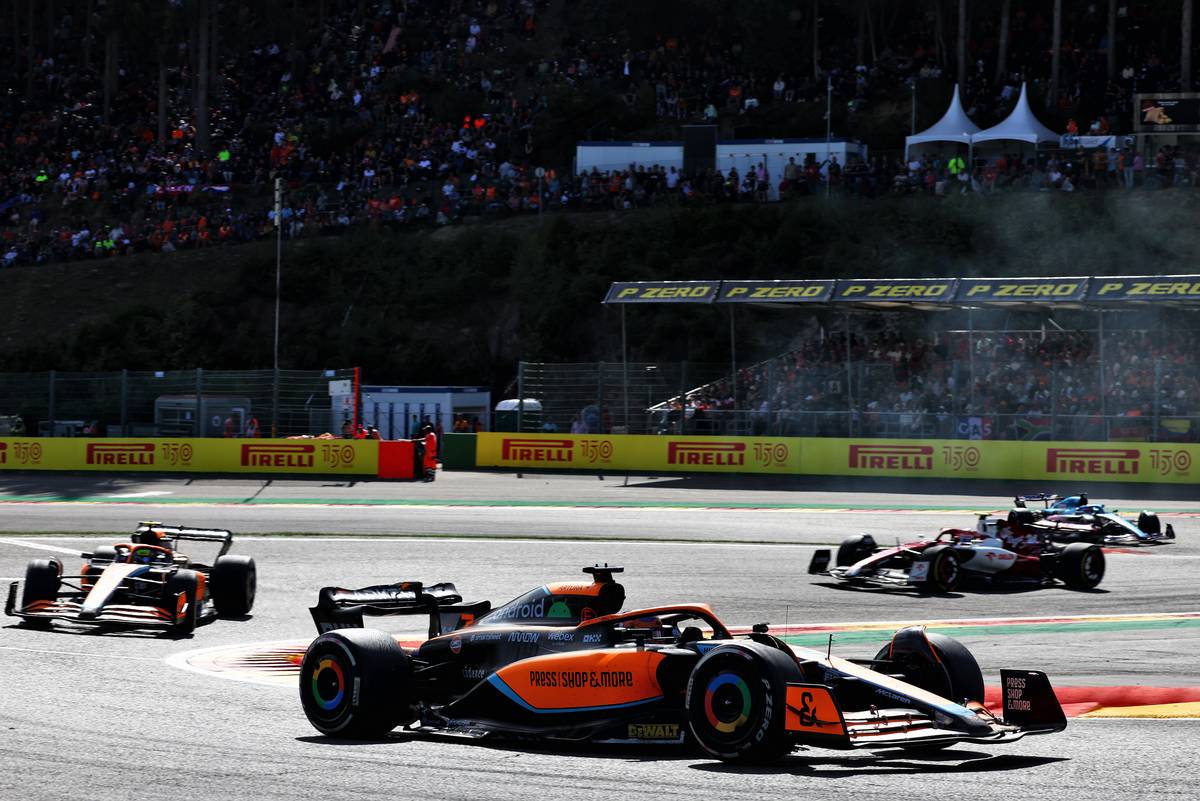 Perez was in on lap 28 for a last set of the hard tyres. Russell was also called in but ended up staying on track until lap 30 before making his final stop, again opting for the hard tyres. Then it was Verstappen's turn to head down pit lane, his huge lead meaning that he was in no danger of losing the lead as he returned to the track on mediums with an eight second lead over Perez.

With ten laps to go, Verstappen's lead was now up to 13 seconds over Perez, while Sainz was being reeled in by Russell who was on fresher tyres. Leclerc was a long way back in fifth but under little pressure from Alonso, while behind him there was a thrilling three-wide battle between Ocon, Vettel and Gasly down the Kemmel Straight, with Ocon successfully picking off both his rivals in a single brilliant move reminiscent of the classic Hakkinen/Schumacher battle in 2000. Behind this breathless encounter, Albon was clinging on to the final point for dear life despite sustained pressure from Stroll and Norris, the latter telling the McLaren pit wall that he was already struggling on his latest set of mediums. "It's too late for Plan G," his race engineer replied.

Russell's charge had now stalled, with Sainz picking up the pace to ensure that he would stay on the podium. Behind them, Leclerc made a final pit stop on the penultimate lap to switch to soft tyres in pursuit of the bonus point for setting the fastest lap: while he came out just ahead of Alonso, the Alpine had the pace to snatch the position with Leclerc still to get up to speed. He finally managed to snatch fifth place back in the final run up Eau Rouge but it was a close run thing and looked an unnecessary risk by by the Ferrari pit wall - especially when the stewards handed him a pit lane speeding penalty that dropped him to sixth after all, widening his points deficit in the drivers championship to 98 points to Verstappen (who did clinch the bonus point) as he drops to third in the standings behind Perez.

Ocon crossed the line in seventh followed by Vettel and Gasly, while Albon successfully picked up the final point of the day for Williams after managing to fend off Stroll, Norris, Tsunoda, Zhou, Ricciardo, Magnussen, Schumacher and Latifi to the chequered flag. Two drivers (Bottas and Hamilton) failed to make the distance after their opening lap mishaps.