The second week of pre-season testing in Barcelona proved a frustrating affair for the Haas F1 Team, but team principal Guenther Steiner said that he was delighted by the way that the team had bounced back and finished off with a flourish on Friday.

"We had a good day today and came out with our heads up," Steiner said after the end of the test. "The last three days were a bit difficult, but today was a good day.

"Even yesterday [Thursday] was a good day, we learned a lot," he pointed out. "We analysed the problem and fixed it overnight so we could could come out running again and know this problem won't come up again in Australia.

"If we're reliable in Australia then maybe we can surprise. It's a tough three days in Australia, but we are confident we can go home with our heads up."

Reliability could certainly prove crucial to how Haas fares on its maiden outing. After a solid first week of pre-season testing, the second week proved significantly more problematic and the team lost a significant amount of running time chasing issues on the new VF-16, which has been developed with technical assistance from Ferrari.

"We had a few challenging days, but that is to be expected with a new team. Two weeks ago we weren't even a team, so the guys did a fantastic job and worked really hard I'm very proud of them.

"We are standing on our own two feet now," he added. "Ferrari helped us with the car but we have to run it. They run their car, we run our car and it's working well."

Haryanto aims for the midfield with Manor 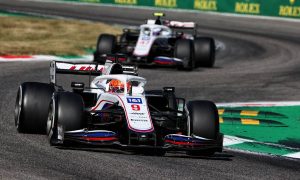