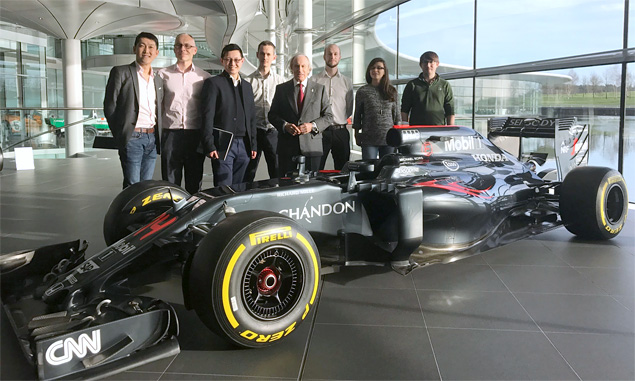 The McLaren Technology Centre in Woking had a most distinguished guest on Monday, when motor racing icon Sir Jackie Stewart dropped in for a quick visit.

The three-time Formula 1 world champion never actually drove for McLaren in his years as a driver. But it was when he jumped into Bruce McLaren's new Formula Three T72-BMC in testing at Goodwood in 1964 and proceeded to beat the New Zealander's times that Ken Tyrrell took an interest, and it was with Tyrrell that he would go on to clinch his hattrick of titles.

The 77-year-old later become team principal of the Stewart Grand Prix Formula One racing team from 1997 until 1999. Ford later bought the team outright, and then sold it in 2004 to an energy drinks manufacturer. We hear that Red Bull Racing went on to do rather well - it must have been in its genes!

Looking at this picture of the day, is it us or - after all the painful problems experienced by the bright orange MCL32 in pre-season testing this month - are we actually getting misty eyed with nostalgia over its darker-hued predecessor?

Back when Rosberg raced in pink