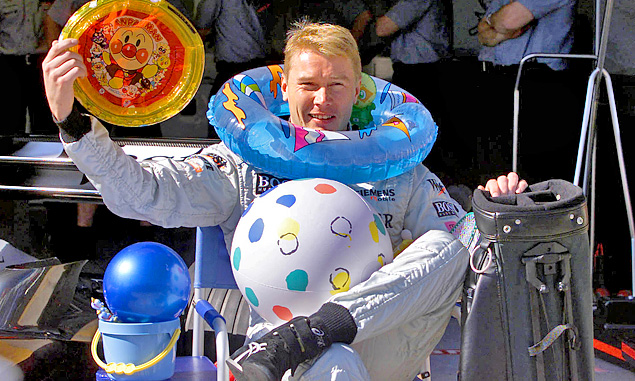 It's two-time former Formula One world champion Mika Hakkinen's 47th birthday today, and we send him best wishes and many happy returns of the day.

Hakkinen won the drivers' championship with McLaren two years running in 1998 and 1999, before deciding to retire from Grand Prix racing at the end of the 2001 season. Here he is celebrating his forthcoming retirement in style in the paddock at Suzuka after the Japanese Grand Prix in which he just missed out on a podium finish in his final race.

Hakkinen did return to competitive motorsport for three seasons in DTM in 2005, 2006 and 2007 but these days takes things a little easier, although he remains a global ambassador for Mercedes-Benz and is no stranger at Grand Prix weekends where he is always a most welcome sight.

Hakkinen shares his birthday with another former Formula One driver, France's Erik Comas, who turns 52 today. A former Formula 3000 champion, champion had 59 starts in F1 with Ligier and Larrousse between 1991 and 1994 so a very happy birthday to him as well.

Flying the flag for F1 at Suzuka

Smile for the camera, Mercedes!