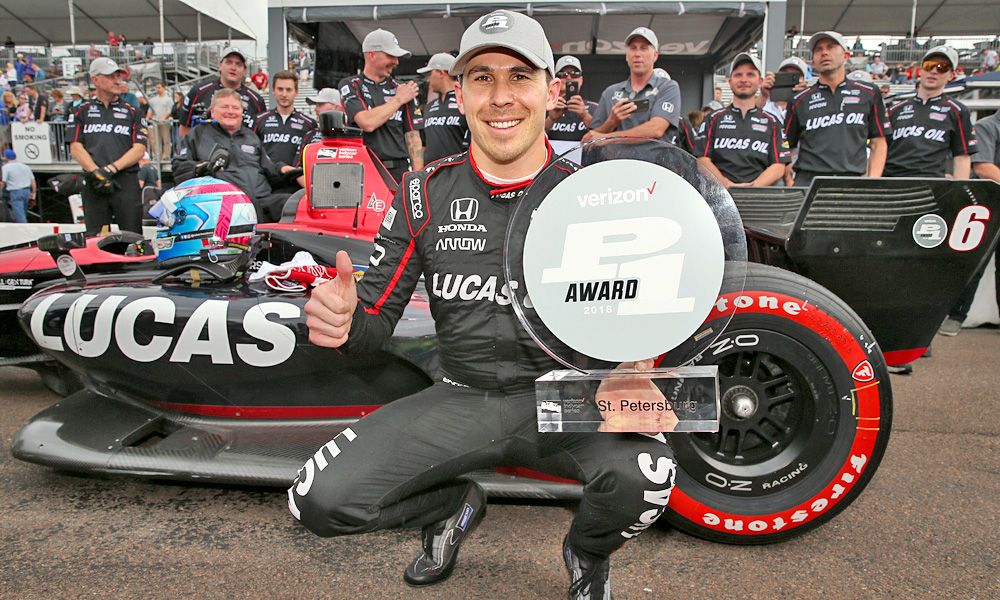 Robert Wickens has got his fledgling IndyCar career off to the best possible start by securing a stunning pole position for his maiden outing.

Qualifying for the Firestone Grand Prix of St Petersburg was held on a track slick with light rain. Wickens timed his final outing in the top six shoot-out to perfection to claim the top spot with a lap of 1:01.6643s (105.085mph).

The 28-year-old Canadian is the first driver to win the pole position in his maiden IndyCar race since Sebastien Bourdais in 2003. Earlier in qualifying he had set a new lap record for the 1.8-mile, 14-turn temporary street course with a stunning outing of 1:00.0476s (107.914 mph).

“It was just chaos – half wet, half dry,” he said afterwards. “I like those conditions a lot. As a kid my whole career, I've seemed to excel in that type of session."

Wickens was the Formula BMW USA champion in 2006. He went on to compete in Formula 3 and Formula 2, as well as Champ Car Atlantic and A1 Grand Prix. He won the 2011 Formula Renault 3.5 Series title and was test driver for the Marussia Virgin Racing.

More recently he's been focussed on the DTM championship with HWA and Mercedes. Last year, he took up a test driver role with the Schmidt Peterson Motorsports IndyCar squad. It's with SPM that he is contesting this weekend's Verizon IndyCar Series season opener.

He'll be starting today's race alongside series veteran Will Power. But behind them on the second row are two more series rookies. Brazilian driver Matheus Leist lines up third for AJ Foyt Enterprises, and Britain's Jordan King is fourth for Ed Carpenter Racing.

The times are a'changing in IndyCar, and it seems Wickens is leading the new blood livening up the US open wheel championship!

Many happy returns of the day to Derek Daly

Small and Tall roar through Nice!