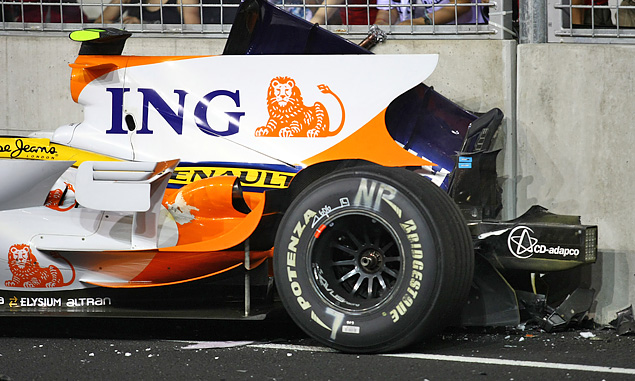 As we get ready for the Singapore Grand Prix weekend, here's a quick look back at the first time the Formula One event was held at Marina Bay in 2008 when the race was won by Renault's Fernando Alonso by almost three seconds from Nico Rosberg (then driving for Williams) and Lewis Hamilton (in his second season at McLaren.)

Alonso's win proved highly controversial. He'd made an early pit stop in the race, and his rivals were then subsequently handicapped by a safety car that came out when Alonso's team mate Nelson Piquet Jr. crashed into the barriers at turn 17. The impact did some serious damage to the Renault as you can see from the picture, and the race had to be neutralised as Piquet's car was craned away and the circuit swept for debris.

Piquet said at the time that it had been a simple mistake on his part, but after he was dropped by the team the following year he made the devastating allegation that he'd actually crashed on the team's instruction in order to put Alonso into a winning position.

The FIA investigated the claims of race-fixing and Renault decided not to contest the charges. The team's managing director Flavio Briatore and its executive director of engineering Pat Symonds both left the team having been handed bans from future FIA-sanctioned events, which were subsequently overturned by a French court. Symonds is now the Chief Technical Officer at Williams Grand Prix Engineering, while Piquet left Formula One and has since raced in NASCAR, the FIA World Endurance Championship and Formula E.