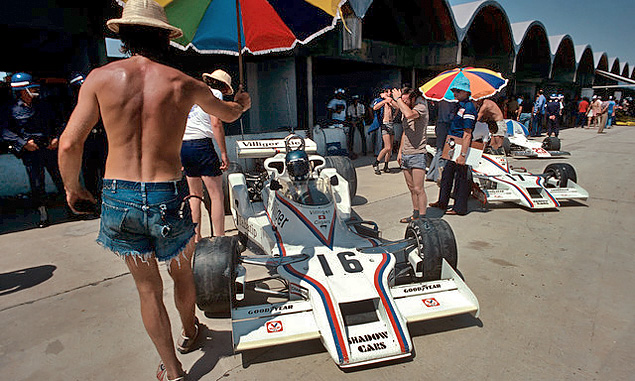 These days we're used to the way that the Formula One World Championship doesn't start until the end of March, but that wasn't always the case.

On this day in 1978, teams and drivers were getting ready for the green flag to drop at the start of that year's Brazilian Grand Prix at the Jacarepagua racing circuit in Rio de Janeiro, now better known as the Autódromo Internacional Nelson Piquet. It was the second race of the year, after the season has got underway two weeks earlier in Buenos Aires, Argentina.

You can see from the picture that it was a gloriously hot and sunny day, as the team worked on Hans Joachim Stuck's Shadow-Ford entry. Stuck was a German driver who competed in 74 Grand Prix races between 1974 and 1979 with the March, Brabham, Shadow and ATS teams.

Unfortunately all the preparation for Stuck ended up disappointment in the race, which was held 39 years ago today. He was forced to retire just 25 laps into the 63-lap race because of a fuel system problem. He was in good company: Ronnie Peterson, Jody Scheckter, James Hunt, Patrick Tambay and Gilles Villeneuve also all failed to make it to the full race distance.

The win that day belonged to Ferrari's Carlos Reutemann in a flag-to-flag domination of proceedings over Emerson Fittipaldi and Niki Lauda. Mario Andretti, who has won the season opener just two weeks before and who would go on to clinch the 1978 Formula One world drivers' championship ahead of Peterson, Reutemann and Lauda, finished the Brazil GP in fourth place in a race that saw French driver Didier Pironi take his first points in F1 by crossing the line in sixth place.

Bernie and Max: comrade in arms