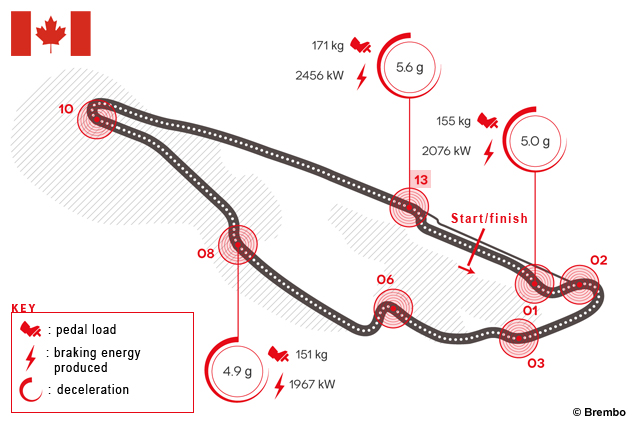 Montreal’s Circuit Gilles Villeneuve is notorious for being the toughest track on brakes during the Formula One season. Its start/stop layout features heavy braking points and bursts of brutal acceleration. Admittedly, drivers only spend 19% of the lap time on the brakes (against 26% at Monaco), but intense deceleration sees them take 4.3g on average over a single lap (2.7g around the Monte Carlo streets). The final chicane is one of the heaviest braking point as it follows the long Casino straight and puts the car’s braking system – but also the driver – under sheer pressure.

According to figures released by Brembo, which supply brakes to half of the F1 grid, F1 cars will slow from 330kph to 120kph over just 122m and 1.29s to tackle Turn 13. As he decelerates, the driver will feel 5.6g and apply a 171kg load on the left pedal (F1 single-seaters are not equipped with a clutch pedal). Consequently, the amount of energy recovered under braking on that spot is extremely high: 2456kW.

Located on Notre Dame Island, the circuit features another two heavy braking points; the first corner sees the driver experience a 5g deceleration as he slows down from 308kph to 126kph in just 1.22s; stats for Turn 8 are fairly similar with a 4.9g deceleration and the car going from 301kph to 107 kph in 1.34s. Since all the braking areas are quite close to each other, brake disks and calipers don’t have much time to properly cool down on the straights. Low-downforce setups can further compound the impact as it upsets braking transmission to the ground. Last but not least, the track is quite exposed and any potential tail wind would “increase the straight line speed, putting the brakes to an even more severe test”. 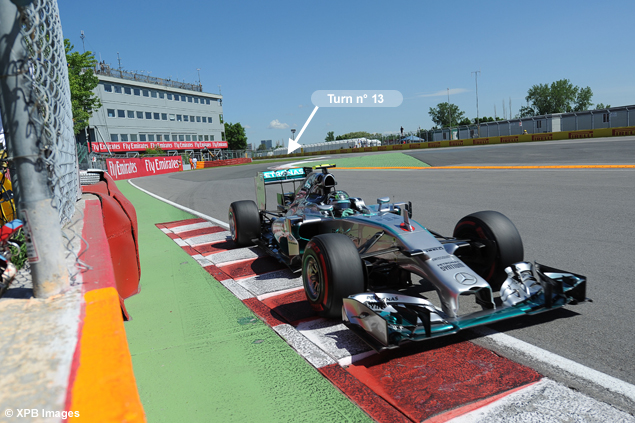