“Eezer Goode, Eezer Goode”…. Remember that song from the early Nineties, at the height of rave culture, which the band The Shamen insisted was not about the drug Ecstasy, even though the lyric clearly stated “Es are good”? Well, some Formula 1 folk would have you believe that Formula E is not about motor racing. 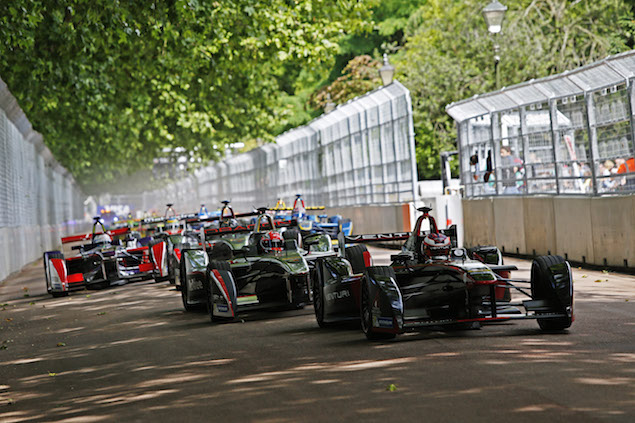 If you watched last Sunday’s final race of the 2014-15 Formula E series from London’s Battersea Park, you’d realise the naysayers are wrong.  We were treated to a short but action packed 29 lap dash around an improvised and incredibly narrow and bumpy track that had several dramatic incidents, quite a few overtaking moves, a home win for Sam Bird and the least likely of three title contenders taking the inaugural Formula E drivers’ title by the smallest of margins, with Nelson Piquet Jr. beating Sebastien Buemi by a single point.

Later that same night, the entire Formula E crowd and the FIA president Jean Todt, attended the prize-giving ceremony held at London’s Natural History museum, where visitors can usually view dinosaur skeletons, other extinct creatures which failed to adapt, get a lesson in evolution and the theory of the survival of the fittest. Are you listening Formula 1?

The London event was a double header with a race on Saturday and another on Sunday, whereas all the other rounds feature the all-in-a-day format, with free practice, qualifying and the race so that trackside spectators get plenty to see, while the all-important TV and internet viewer has a nice easy package to follow.

Personally, I found the lack of nois quite thrilling as I nearly got run over several times walking down pit lane

Noise or the lack of it has been a talking point in F1 since the new power units were introduced in 2014 and the Formula E cars are indeed virtually silent. Personally, I found that quite thrilling as I nearly got run over several times walking down pit lane: those little cars just shoot out the garage with no rev-up to warn you of imminent carnage.

We’re told around 60,000 people came to Battersea over the weekend and with tickets going for as little as £15, you can see that, for those with only a passing interesting in motor sport, that’s a more family friendly proposition than what Silverstone is charging this weekend for the Grand Prix, but maybe that’s like comparing apples and pears. In the park, you definitely noticed more families than you see at a conventional race track and there were no traffic jams, other than the usual London mess, because there simply were no car parks. 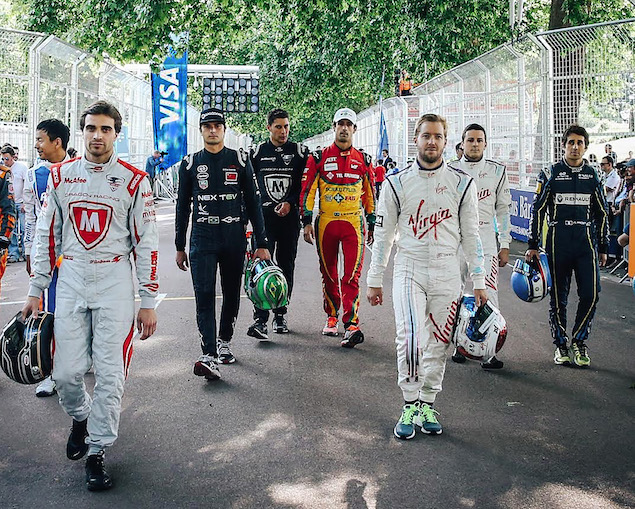 Eavesdropping on conversations in the grandstands, it was clear that many of the spectators knew a lot about what was going on and were happy with what they were seeing. They were aware of the fan boost idea, where you can go on line and give your favourite driver the chance to use a power boost during the race and in the London event, sponsored by Visa, they’d contrived to get Usain Bolt involved. Loic Duval secured the one-off “Bolt’s Fanboost” by winning a 100 metre sprint, beating Sam Bird and Daniel Abt! The spectators I spoke to didn’t seem to find it strange that drivers could get more power purely based on their popularity with fans or their athletic skills, so why not?

F1 royalty was out in force, even though, or maybe because Goodwood’s Festival of Speed was taking place over the same weekend: Emerson Fittipaldi was there, the newly knighted Patrick Head, (Williams provides the batteries for all the Formula E cars), and the Felipes - Massa and Nasr - turned up, as did global stars such as Antonio Banderas and Will.I.Am.

The London event also drew a much bigger media attendance than previous rounds, partly because of the appeal of the UK capital and also because the British GP week is now with us. It was interesting to note that the Formula E press regulars are a much younger crowd than you get in a Formula 1 media centre, proving that a young media can better engage with Formula E’s target audience. The proto-journos clearly found all that daylight and sunshine in Battersea Park something of a shock to their system, after months of blogging from their darkened bedrooms but hey, we all had to start somewhere. 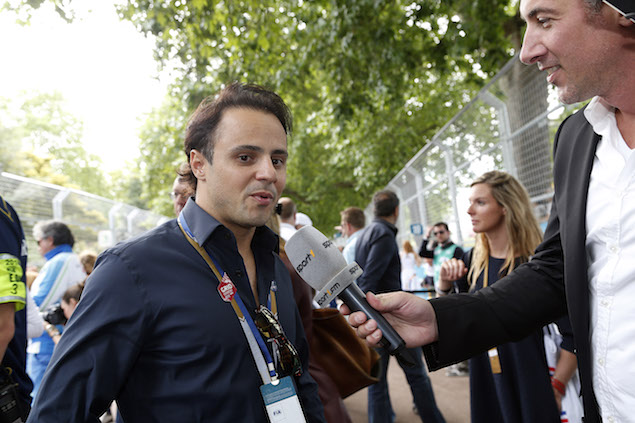 While they indulge in a degree of evangelism over this brave new silent world of “clean” electric racing, I was amused to spot several of F1’s better known money sharks basking in the shallow waters of the Battersea Park lakes and that can only be a good sign, if the series is to flourish: let’s save the world and make a million! There is talk of upping the race count from ten to twelve for season 2 and the provisional calendar is due to be announced at the FIA World Council on 10 July, a month before the first 2015-2016 pre-season test takes place at Donington Park.

In this maiden season, Renault has supplied all the “engines” but next year, teams can develop their own, as well as the gearbox and suspension. Sensibly, aerodynamics remain fixed, otherwise you’d end up with an arms race similar to the one that blights Formula 1 and teams would spend far too much time in the wind tunnel. Formula E is not cheap and while in real terms, the cars are capable of lapping a proper race track like Donington on the pace of a Formula Ford or a fraction quicker, the cost of a season is closer to that of GP2, namely around the 4 million dollar mark. 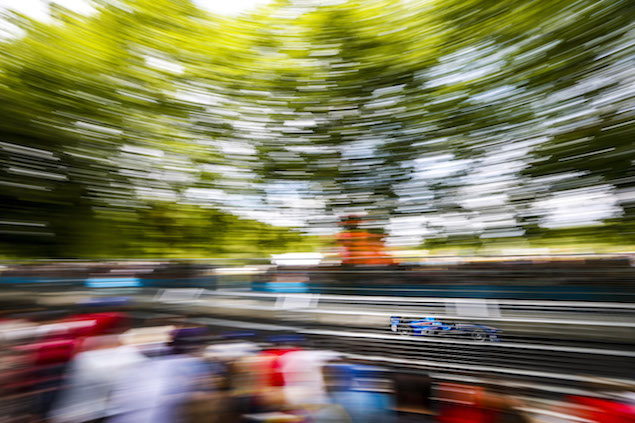 To coincide with the freeing up of power unit development, Sir Richard Branson held a press conference in Battersea on the Saturday to announce a tie up between his Formula E team and Citroen (under their DS brand) which will see the French manufacturer join the fray next season. The Virgin boss made some bold claims, including the suggestion that in 20 years time “no new road cars will be petrol driven.”

He might be right, however I’d disagree with his other sweeping assertion that “in four or five years, you will find Formula E taking over from F1 in terms of number of people…” Formula E has the potential to be a great show, but unless Formula 1 insists on continuing to the self-harm we’ve witnessed in recent months, it should still hang on to the top slot in racing and sporting terms. You only had to look at the drivers taking part in Battersea: there’s not a single one of them who wouldn’t rather be on the grid at Silverstone this Sunday.

There’s always an element of luck involved as to whether or not a race is exciting and Battersea produced a serendipitous mix of sunshine, with a dash of rain to spice up Sunday’s qualifying, which impacted on the final result. However, if one had to highlight a few areas where this new formula really hit the spot, it would be the fact that it’s CEO, Alejandro Agag achieved what Bernie Ecclestone has long tried to secure but so far failed to deliver in Formula 1, namely street races in London and Moscow. Not forgetting the fact that Nelson Piquet’s title marks the first ever championship win in an FIA series for  a Chinese-owned team, which is surely significant for the future. 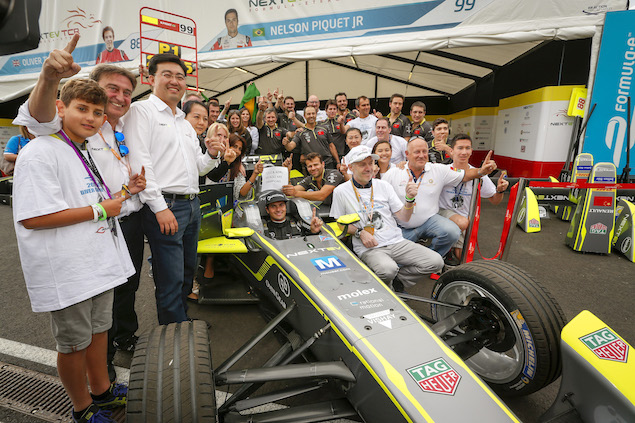