Selecting a Silverstone classic to revisit before next weekend's British Grand Prix was an easy task for the F1i staff, with the 1973 edition emerging as a clear winner. The eventful race is remembered for its sensational huge first lap pile-up, and the very opposite fortunes which prevailed that day for two McLaren drivers. 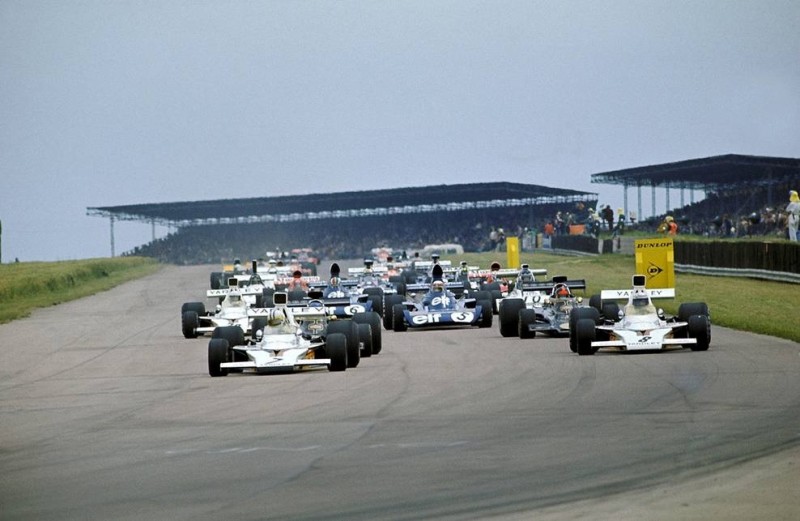 By the time the Formula 1 community reached the venue of the 1973 British Grand Prix at Silverstone at the midway point of the season, a battle royal had emerged at the top of the driver's championship standings between Jackie Stewart and reigning World Champion Emerson Fittipaldi.

With three wins each and almost identical runner-up spots after eight races, the two contenders arrived in Northamptonshire separated by a single point and all ready once again to duel it out on the mighty historic circuit.

As usual there were some additional entries for the British Grand Prix. Following an impressive showing in South Africa on his F1 debut, and another in France two weeks before Silverstone, Jody Scheckter was entrusted with a third McLaren, run alongside the mounts of regular drivers Denny Hulme and Peter Revson. While the young South African's abundant natural talent was clear for everyone to see, he was still very much a raw gem, lacking experience but mentored for the big time as a precious asset which McLaren was determined to capitalize on in the future. 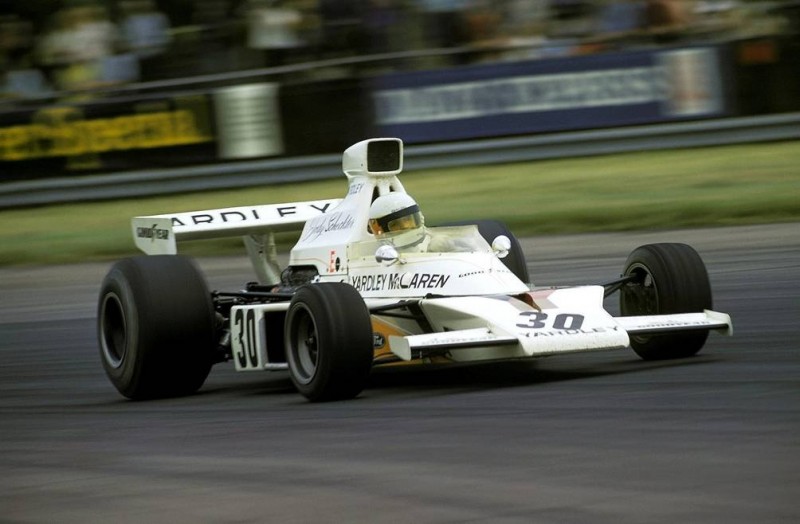 Young Jody Scheckter at speed in the beautiful McLaren M23.

In qualifying, pevious French Grand Prix winner Ronnie Peterson secured pole position and headed the front row of the grid alongside the McLarens of Hulme and Revson. Championship rivals Stewart and Fittipaldi were right behind while the third row was comprised of Scheckter, Cevert and Reutemann. With 31 cars on the grid, it was the biggest field of the season so far.

When the flag dropped, the mad dash down to Copse saw everyone frantically fight for position with Peterson exiting in the lead only to lose it midway through the first lap to a blindingly fast starting Jackie Stewart. As the pack plunged into the ultra-fast Woodcote Corner for the first time, Scheckter disposed of Hulme for fourth place but got out of shape on the exit, drifted wide and looped into a spin. The McLaren mildly brushed the pit wall before coming to a halt, its driver vainly waving his arms in warning, but the gesture was pointless.

The bulk of the pack barreled down on the stranded McLaren and mayhem ensued.

The bulk of the pack barreled down on the stranded McLaren and mayhem ensued. Scheckter was eventually hit, and eight other cars were involved in the shunt and eliminated on the spot, including the entire three-car team of John Surtees, as drivers took avoiding action only to collect one another in a fracas of metal and debris. It was the worst mass collision in Formula 1 history, and yet amazingly only one driver was injured, Italian Andrea de Adamich who suffered a broken leg and a painful 30-minute wait while marshals worked to extract the unfortunate driver from the carcass of his Brabham. It took another hour to clean up the track and restart the race with a 19-car depleted field. 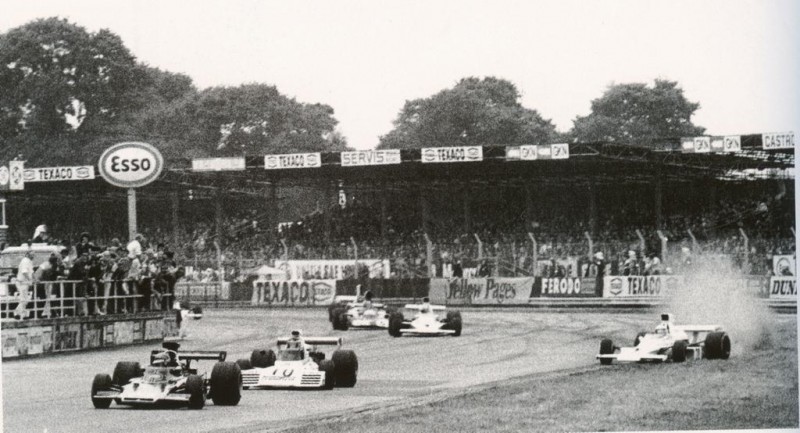 As Scheckter runs wide on the exit of Woodcote, mayhem is about to ensue...

Once again, Ronnie Peterson's Lotus led the field off the grid, with Lauda and Stewart in hot pursuit. Once the Scotsman disposed of the Austrian's BRM, it appeared to be only a matter of a few laps before  Stewart would get the upper hand over Super Swede. But as he attempted to undercut the Lotus on the entry to Stowe, the Tyrrell lost its balance and slid into the infield, plowing through the wheat, prompting BBC's Raymond Baxter to deliver a classic line: "Well now he's really in the agricultural business!".

While Peterson built himself a nice cushion, Fittipaldi moved his own JPS up to second position with Revson behind in third. The order remained unchanged until lap 37 when Fittipaldi retired, clearing the way for Revson to mount a challenge on the leader. Two laps later the American went ahead, driving a steady race home to deliver the goods and his very first Grand Prix triumph. 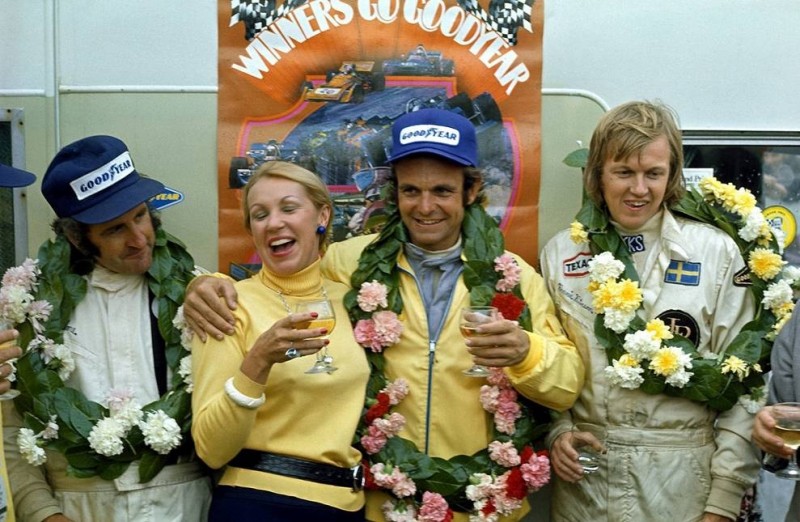 It was a popular victory in the F1 paddock and one which confounded those who may have doubted the motivation of a man foolishly considered by some as a dashing hobby-driver playboy. His ultimate speed may not have rivaled that of the best he raced against, but consistency and determination justly elevated Revson to the big time.

Peter went on to win the chaotic Canadian Grand Prix at Mosport a few months later before parting ways with McLaren for 1974, and switching his allegiance to Don Nichols' Shadow team. Unfortunately, it all went terribly wrong during private testing for the South African Grand Prix when Revson's Shadow DN3 was pitched into the barriers after a suspension failure, instantly killing the 35-year-old American.