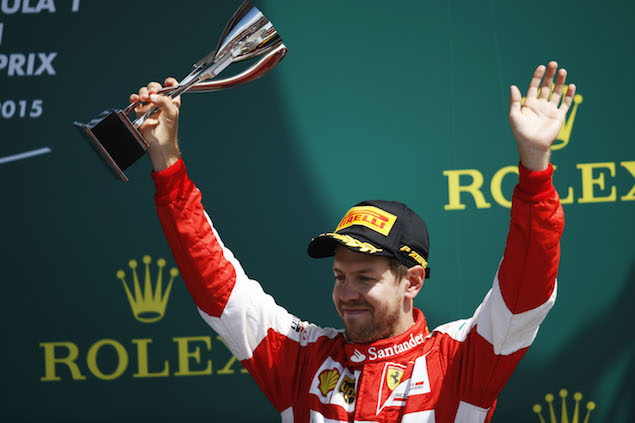 Sebastian Vettel: “I had a really bad start, I nearly didn’t get off the line and lost positions. At the restart I made up a position, but I lost two as a consequence. It didn’t seem to come together at this point, a bit like the whole weekend for us, but then we were able to turn it around.
We recovered through strategy, mostly by being very aggressive. I was in touch with the team all the time, it was not easy to take the right decision with the weather. But we did a great call to pit just in the perfect lap, made up a lot of ground and finished on the podium. I’m sorry for the people that got wet, but the rain helped us today!

“It was in the end a podium finish that we deserved, as we made the right call at the right time. Williams did a small step forward, for us I think we just didn’t find the rhythm at this weekend. There is plenty of things we have to learn and understand quickly. We are not in favour of these hard tyres, but it is the same for everyone, so no excuses allowed. If you look at the gap to the first two cars, it was bigger than normal, so it is up to us to come back for Hungary.”

Kimi Raikkonen: “In the early part of the race we were stuck behind Hulkenberg’s Force India, they were too fast on the straight and in the places you could pass, while we lacked some speed. It’s a pity because the handling of the car was good through the whole race and the behavior was definitely better than yesterday. When it started raining heavily, the track became very slippery, especially in Turns 7 and 8; so I took the decision to come in the pits for Intermediate, but then the rain stopped. Probably I made the call three or four laps too early. But in general, this kind of track is not ideal for us, and this is something we have to work on.”

Maurizio Arrivabene: “Overall I can’t be happy with this weekend: on an all-dry race, the result would have been much different. I feel happy because once again Seb made the perfect call to come into the pits, and then drove superbly to open the gap to the Williams cars. Also, I am pleased with a very good race strategy. We need to stay humble and not brag ourselves, because today third place came courtesy of a great drive by Seb and a great strategy-but we also need a great car. The strategy guys do a wonderful job, but when it rains, it’s the driver who has the final call to the pits. In the case of Kimi, whose strategy was identical to Seb’s, he thought it better to come in. If it had rained harder, maybe he could have won the race. But we must be honest and acknowledge that Williams was stronger than us today”.