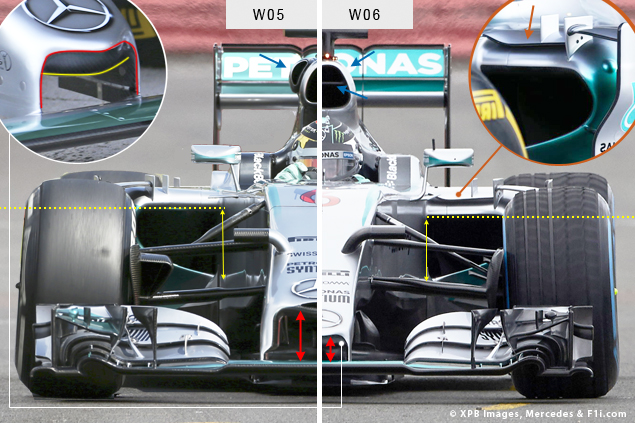 ‘If it ain’t broke, don’t fix it’. Mercedes masterminds have evidently heeded the saying when the time came to design their 2015 contender. Last year’s all-conquering W05 enjoyed a very healthy margin compared to its rivals, as its impressive track record testifies: 16 wins, 18 pole positions, and a 294-point edge over second-placed Red Bull in the Constructors’ race. Therefore, it is only logical to notice that the W06 has been designed as an optimised evolution of its forebear. The German behemoth was never likely to go for a radically different design, e.g. what McLaren has done with its new MP4-30. Still, there are a few details that make Mercedes’ latest charger differ from its title-winning predecessor.

EVOLUTION RATHER THAN REVOLUTION

When the time came to design and develop its new car, Mercedes elected to be very cautious, as executive director (technical) Paddy Lowe admitted: ‘Every development you make has some risk - you can't move forward without some risk of potentially not getting it right. So we were very conscious of the point that we had a good car. We didn't want to throw any babies out with the bathwater, as we took steps to make developments.’

First, the engineers at Brackley have kept the same nose design philosophy; only they adapted it to the new 2015 technical regulations. In the on-going ‘long nose vs. short nose’ debate, Mercedes did not follow McLaren or Ferrari's take, and went for a very short, pulled-back approach, similar to last year’s. The nose sits on the minimum regulatory limit so that it can maximise the front wing’s cross-section. This will help better direct the airflow towards the splitter as well as underneath the car in order to create Y250 vortex. What’s more, the absence of metallic grey paint at the base of the nose makes it look slimmer than it actually is. 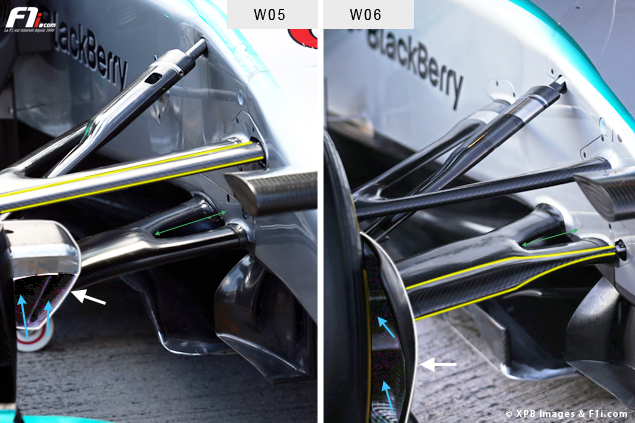 Another familiar feature that was carried over from last year’s car is the Y-shaped (instead of the more traditional V form) front conjoined lower wishbone. While Ferrari has also implemented the concept on the SF15-T, Mercedes has pushed the design even further on its new W06 by shortening the spread legs of the wishbone to make it more aero-friendly. Mercedes thus hopes to make the most of the wishbone in order to control the airflow coming upwards from the front wing, and make sure it does not trouble the rest of the car.

The same philosophy goes into the new design of the steering tie rods, which are now level with the lower wishbone (instead of the upper one). This will help bring down the car’s centre of gravity, with the steering rack also at a lower level. The widened shape of the rods means these elements are becoming even more aero-beneficial since they can direct airflow with more precision. Last year’s ban on FRIC suspensions has probably freed some space in the area, which Mercedes engineers have been quick to exploit by implementing this new design.

On the other side of the suspension, the brake ducts have an almost flat surface that did not feature any inlet. The concept is not new. Other teams, including Mercedes in 2012-2013, have already used plane deflectors to feed air to the front brakes, but last year’s W05 did not feature these elements. Having a smooth surface on that kind of deflector perceptibly improves how the air flows around the wheel. This means the blown wheelnut solution has not been implemented on the W06, whereas McLaren, Red Bull, and Williams have trialled the design in Jerez. As a quick reminder, here is how it works: oversized brake ducts capture the airflow and feed it towards open wheelnuts. Instead the latter have a pointed end on the Silver Arrows, a design that helps accelerate the engagement of wheel guns when switching tyres at pit stops. 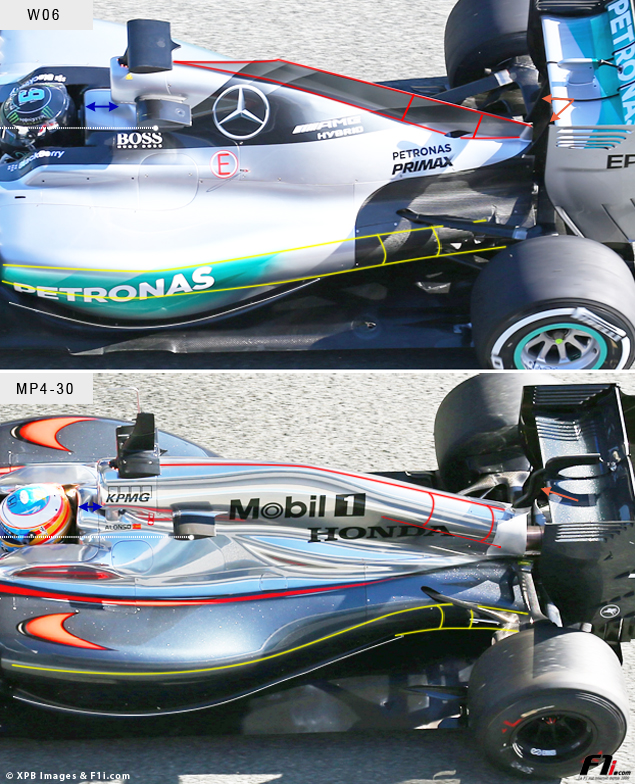 Compared to last year’s car, the air intake is now bereft of its side gills (which have appeared on the Lotus) but features a wider diameter. Like on the MP4-30, it is split into a couple of ducts: one feeds the V6’s airbox while the second helps cool the gearbox oil. Along with the absence of side gills, the car’s slimmer sidepods further hint at cooling improvements on the engine, lubricants, and radiators.

Cooling has been further improved on the engine, lubricants, and radiators

Indeed, and despite an alleged extra 50bhp coming from the power unit, the sidepods have been trimmed down while the engine cover also sports a slimmer design on its edge. This has consequently increased the size of the ‘shark fin’, so that the whole assembly meet the technical regulations.

The W06 extracts hot air thanks to the extended outlets on its sidepods, a concept that differs from the McLaren’s oval-shaped engine cover (the Red Bull used to feature the latter design but we’ll see that things have changed on the RB11). What’s more, Mercedes appears to have kept their original water to air intercooler assembly with the system implemented within the chassis itself (right before the tank), rather than in the car’s sidepods. 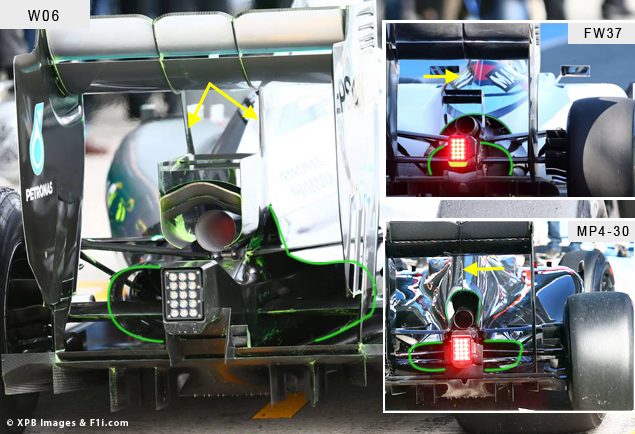 Mercedes’ hybrid turbo-charged V6 undoubtedly proved a key factor in propelling the Silver Arrows to so many victories last year. Engine boss Andy Cowell explained that power unit development has been pushed even further this year:

“We have been working hard on all areas of the Power Unit to increase the conversion efficiency of every single system – trying to make our package more thermally efficient and produce greater absolute power. The focus in this respect has been on combustion efficiency and frictional losses … There is very significant scope for change under the regulations and significant opportunities to make performance gains, so we have left no stone unturned in our quest for performance.”

Cowell thus suggested that the log exhaust – a unique feature on last year’s PU106A – has been replaced with a more conventional manifold, probably in order to cope with higher rpm on the 2015 power unit.

As head of High Performance Powertrains (HPP) at Brixworth, Cowell also admitted Mercedes could retain some margin in PU development in the early part of the year now that in-season improvements are allowed. Meanwhile, rival manufacturers Ferrari and Renault have already used part of their 32-token allocation to upgrade their power units ahead of Melbourne. Renault Sport F1 managing director Cyril Abiteboul even disclosed that Viry would have spent two thirds of their tokens by the opening round.

Except for the horizontal flaps located above the sidepods, the rear of the W06 bears many resemblances to its predecessor, i.e. both the diffuser and ‘monkey seat’ winglet are fairly similar. However, all these elements, including the front wing, are bound to change by the opening round in Australia.

If Mercedes has managed to sort out the reliability niggles that bugged its W05 last year, then coming up with an evolution of the car rather than a complete overhaul would prove both a wise decision and a masterstroke. Even more so as rival manufacturers cannot afford to play safe and have to make bold and uncompromising technical calls. 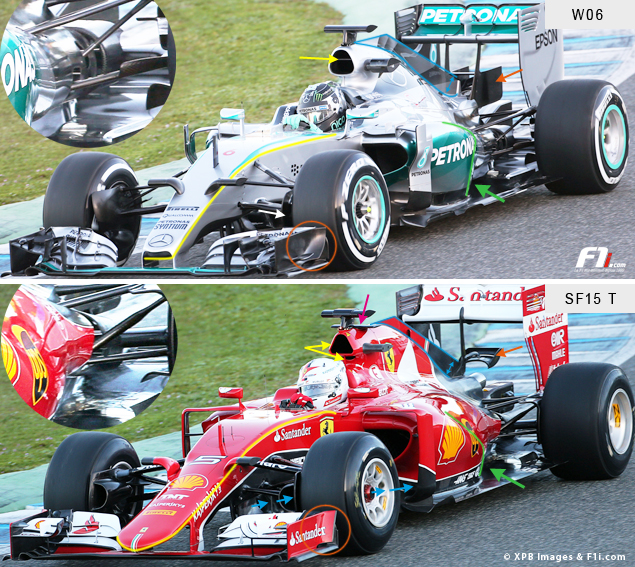 A cool solution on the McLaren-Honda?