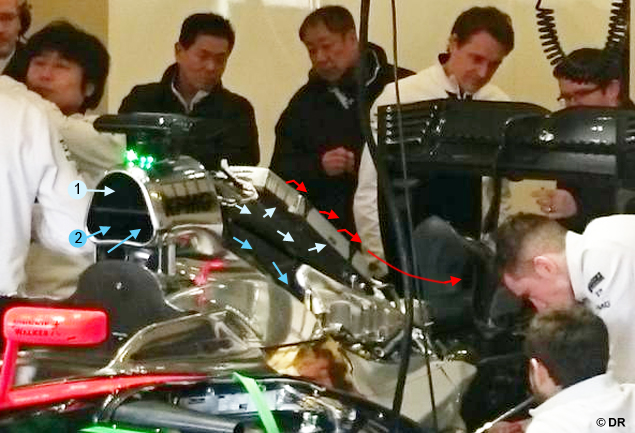 Thanks to a picture posted on Twitter by Spanish journalist Albert Fabrega, we now have a sneak peek into one of these innovations and can see it affects engine cooling.

As shown above, the car’s airbox is split into a pair of ducts.

The first duct feeds cooling air to several little radiators that are attached directly to it. Hot air coming off these elements then flows along the curve of the engine cover, down towards an oversized flared vent at the rear. Moreover, one of the radiators might serve to cool the engine oil.

The second duct feeds air to the compressor of the V6 internal combustion engine (ICE). Like its Mercedes counterpart, the Japanese ICE also features a split-turbo design.

The extremely compact package has freed the sidepod inlets

The extremely compact package has freed the sidepod inlets where the air-to-air intercooler has been implemented. By comparison, the Mercedes installation has the intercooler lodged within the chassis itself, right before the tank.

We shall nevertheless remain prudent about any further educated guesses at this stage, and wait for additional images to confirm.

While featuring a radically new design, the MP4-30 saw its official track debut being hampered by multiple teething problems and could only complete 350 kilometers across four days of pre-season testing in Jerez. Honda’s situation is quite similar to what the other manufacturers experienced with their power units 12 months ago. Indeed, the Japanese engine supplier must get to grips with a new hybrid technology that remains tricky to set up, let alone fine tune.

What’s more, the relatively cool temperatures in Jerez have not put too much strain on the engines in terms of cooling, another prospect that is likely to give cold sweats to the McLaren-Honda engineers. 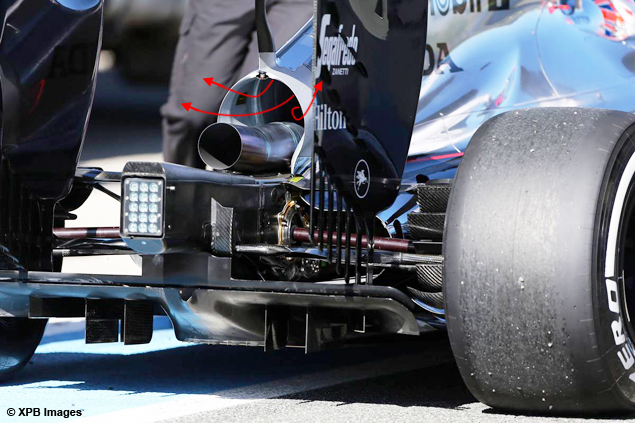 A closer look at the Mercedes W06