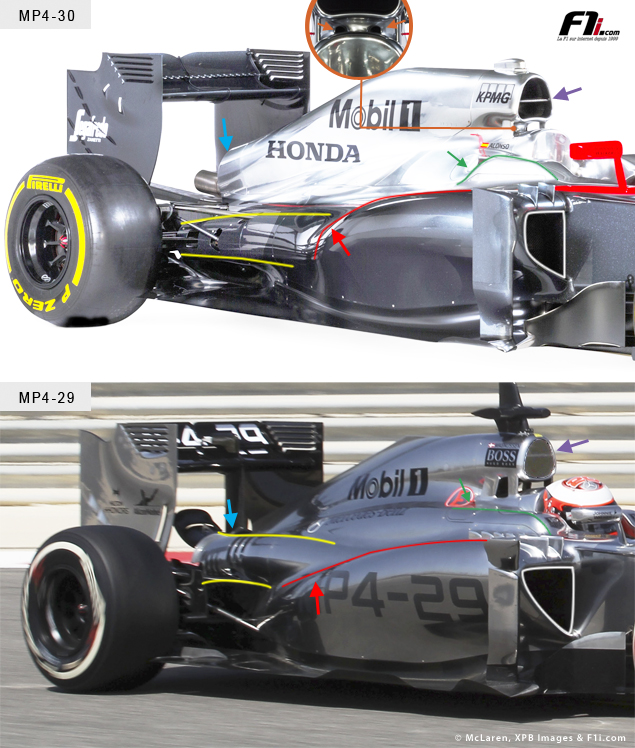 As McLaren and Honda look to rekindle their old flame and emulate past achievements, it was hardly surprising for the renewed alliance’s first car to be so eagerly awaited. The MP4-30 undoubtedly created a stir when it was launched on Thursday. And the first images did match expectations with the machine’s livery harking hack to Woking’s late 90s colour schemes, while its design clearly breaks away from their previous contenders.

Arguably the MP4-30’s most striking feature is how compact the rear of the car is. As shown on the illustration below (see red lines and arrows), the sidepods have been trimmed and tightly wrap around the engine cover, while they were both long and bloated on McLaren’s 2014 charger. The Woking engineers have moved the power unit’s radiator, intercoolers, and oil coolers to the front of the sidepods, which has enabled them to unclutter the back of the MP4-30. This means that the released heat is now expelled via a narrow bottle-shaped rear end, and through a small outlet located above the exhaust. This also seems to indicate that Honda has come up with clever cooling solutions on their power unit, as hinted by technical director Tim Goss, who replaced Paddy Lowe at McLaren last year: “The chassis is much more compact, Honda has done a fantastic job of just trying to package everything in such a tight space. They have pondered whether to keep the compressor and turbine at the back of the engine or if these should be split instead. They’ve also thoroughly considered where to place the radiators – should they be on the left, or rather on the right? Ultimately, all these technical decisions obviously factor in the car’s aerodynamics.” 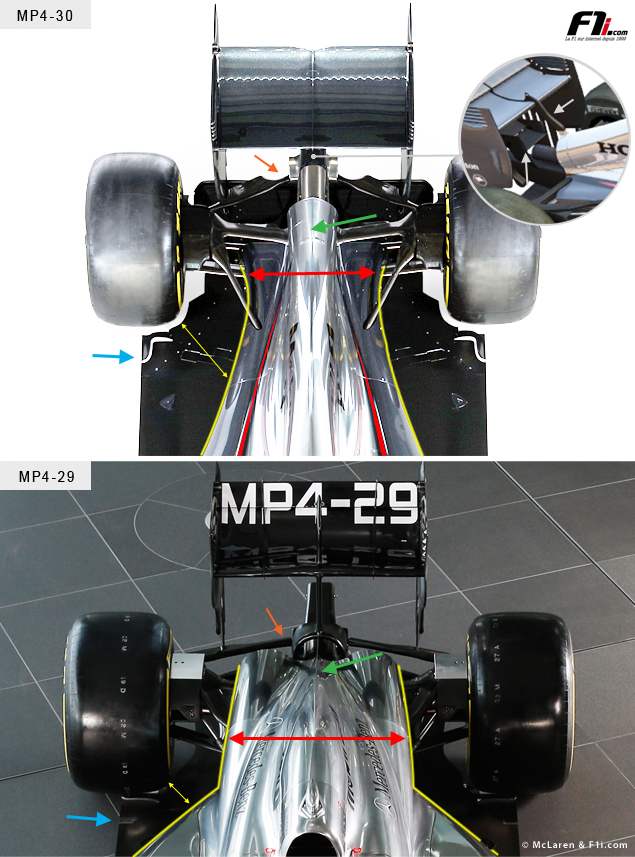 A little inspiration from Red Bull?

Now powered by the Honda V6 unit – for which the Japanese manufacturer appears to have followed Mercedes’ PU design – the MP4-30 has also dropped its predecessor’s bloated cannons so that it can extract hot air. The slimness of the overall package particularly stands out around the cockpit. While the side padding is set at a regulatory height, the area around it has been lowered and shrunk to a minimum (see green arrows and curved lines). The roll-hoop inlet remains split into a pair of ducts – one to feed the V6’s airbox, the second to help cool the gearbox oil – while the opening behind the driver’s head has been replaced with two tiny inlets. The latter will feed cooling air to the electronics around the engine.

The very tight rear certainly exhales some Red Bull flavour as it bears the signature of Peter Prodromou, who rejoins McLaren after working under Adrian Newey’s wing at Milton Keynes for the past few years. However, the MP4-30 is not entirely the brainchild of Woking’s new chief engineer since Prodromou only came back on board in mid-September 2014. This means that Goss and engineering director Matt Morris had already validated all the major design concept and decisions. This is truly visible on the rear suspension assembly, with the wishbones still mounted to the very back of the transmission (see orange arrows) so that it can fit a couple of bell- or mushroom-shaped aero elements. Prodromou may not be a major fan of the whole concept but his late arrival meant that the overall suspension architecture, which is inherently linked to the gearbox, could not be altered in time. In any case, the mushroom fairings aren’t really compatible with the lower position of the tiny rear end cooling inlets.

Despite the released images not showing any central pylon to support the car’s rear assembly, the MP4-30 should not emulate Williams’ concept, and actually feature the element according to the 360° video animation displayed on McLaren’s website. What’s more, the overall standard package should not have any dented edge on its flap, even though the aero solution appears on the pictures. Spotted at last year’s German Grand Prix, the leading edge could however pop up on a case-by-case basis, depending on the circuit’s requirements. 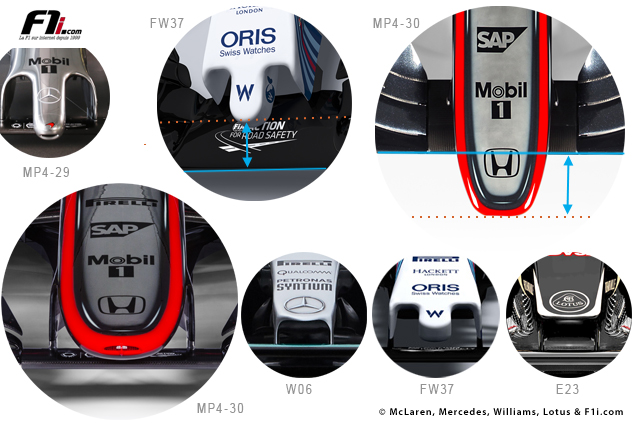 Nose designs have been a much talked about topic across all of the 2015 F1 launches, and it is no exception with the MP4-30. McLaren did spring a little surprise as they went for a longer and wider option than their rivals, with the nosecone also diving at a steeper gradient. While Williams and Lotus tried to minimise nose length and stay as close as possible to the 85cm minimum limit, the MP4-30 clearly goes over it. Indeed, the Woking-based team has increased the nose well beyond the front wing section. McLaren may well elect to shorten their car’s nose later in the season though, should they pass another crash-test. If the FW37 abides by the new FIA technical regulations by having a square cross section in the front wing area, Jenson Button and Fernando Alonso’s latest machine will stick to the rules with a more rectangular, slimmer, and wider approach.

The front wing/nosecone elements actually proved to be the Achilles heel on last year’s MP4/29. Its overall architecture did feed a lot of air under the car but failed to produce a powerful vortex along the Y250 axis. Along with the front wing pylons and neutral section, the new nose design (mostly its lower part) should help optimise the airflow underneath the car. McLaren already tried to address the issue in Sochi last year when they introduced a new front wing, which was also inspired by Red Bull. The front suspension follows a conventional path, with the upper arm mounted as high as possible (as seen on the Williams). Yet, McLaren’s design also has a flat surface in a bid to generate more mechanical grip (as featured on the Lotus).

McLaren has taken inspiration from Mercedes, albeit in a less radical way, to design the MP4-30’s camera mounts by placing them at a higher level so that they can better redirect the airflow under the car. 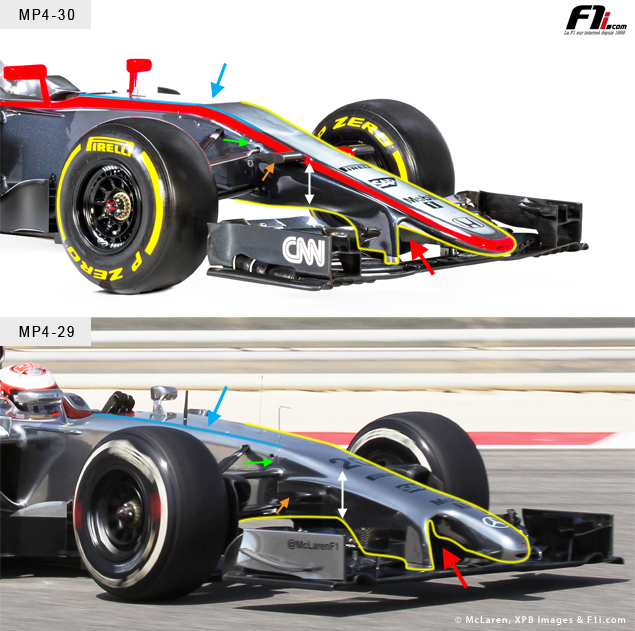 If the Red Bull influence can be seen visually, it is not the only token of how the MP4/30 breaks away from its predecessors. While previous McLaren designs traditionally sought to cope with maximum downforce and peak figures in windtunnel testing, sometimes at a risk of narrowing the car’s optimum performance window, the team now looks to have downforce that is actually exploitable by the drivers.

"This concept of being driver friendly is part of this new philosophy”, explained racing director Eric Boullier. "We are trying to make sure we can give our drivers the ability to exploit the car to the limits, which means getting this performance package. If you have a performing car and a driver cannot drive it, then it is obviously a waste.”

One of Red Bull’s strengths has always been to produce airflows that are extremely stable. This can be seen in testing when teams use green paint to visualise air movements around the car. A thorough look at the MP4-30’s sidepods, air intakes, front and rear wings clearly highlights this new philosophy.

Rarely had a new McLaren been so impatiently anticipated, with the stakes reaching new heights this year. After all, the Woking-based outfit had to settle for fifth in the constructors’ championship in 2014 and struggled to stay ahead of Force India in the standings. Worse, McLaren has not won a race since 2012 and a Jenson Button victory at that year’s Brazilian Grand Prix. However, the performance of their new MP4-30 should not be judged immediately after its maiden testing outings. Indeed, so complex is the hybrid power unit technology and so “new” is the alliance with Honda, that teething problems are likely to occur. How well both partners will react under duress should give an early indication of their potential return to form. 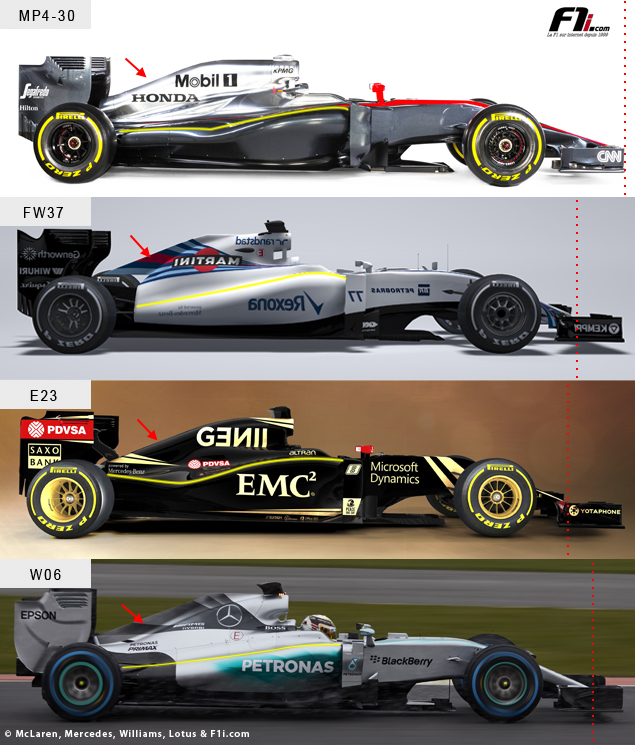