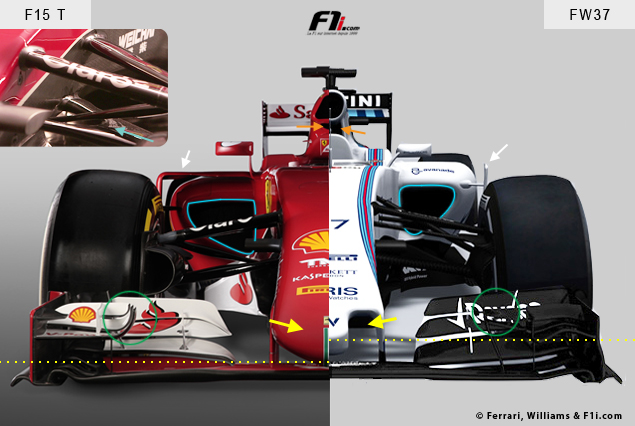 It has been a while since the Prancing Horse produced a thoroughbred. The new SF15-T, the first actual brainchild of technical director James Allison at Maranello, must be Ferrari’s first step on the road to recovery, especially after such a lacklustre 2014 (no win and a paltry two-podium track record). So it comes as a little bit of surprise to see that their latest charger does not differ a great deal from its predecessor, with the SF15-T looking more like a targeted optimisation of last year’s concept than a proper revolution.

With its long and diving nose, the 2015 Ferrari has not retained the shorter options favoured by Williams, Mercedes, and Lotus. Instead, it features a similar design, yet flatter, to its McLaren counterpart. However, and this is a surprise, the SF15-T’s front-wing pylons are almost flat and quite simple, while these have been twisted for aero purposes on the MP4-30. What’s more, the Italian chassis does not seem to feature any ‘vanity panel’ – a small piece of laminate used to cover a stepped nose –, so the monocoque can only be adjusted from the top of the nosecone. If the shorter ‘Williams’ design turns out to be a more competitive package for instance, Ferrari will have limited leeway to alter its nose.

On the other hand, the front wing features a more advanced design with no less than eight aero elements on the outside and endplates that look more even-surfaced, a concept already seen on the Red Bulls. Even though one must always refrain from reading too much into launch pictures, it looks like Ferrari will once again try to implement the front blown wheelnut solution they sampled last year. This is hinted by the presence of closed off wheelnuts and oversized brake ducts, with the latter capturing airflow before feeding it towards the former. Red Bull and Williams have already gone down that development path but the solution remains tricky to fine-tune. 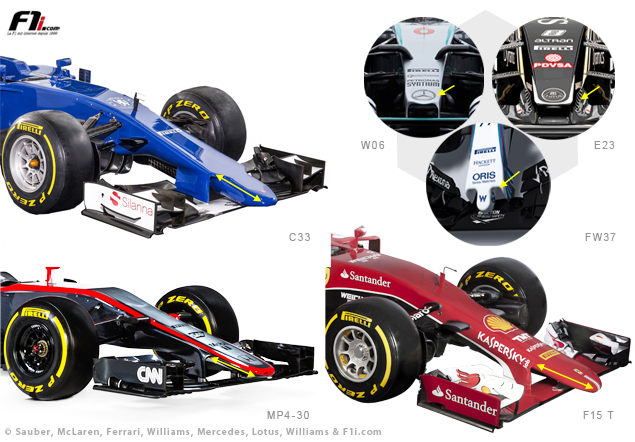 The SF15-T has kept the pull rod design on its front suspension, which has been a unique assembly since Ferrari introduced it on their F2012. Allison even admitted that Maranello decided not to allocate too many resources on this area, but elected to focus on more critical issues instead. Furthermore, there is actually little difference between the weight-saving push rod approach and more aero-friendly pull rod design in terms of performances gains.

If suspension pivots are high-mounted (like on the Williams), it is still uncertain whether the internal design will feature a classic spring-damper unit or a hydro-mechanical system (like on the future Force India).

With the W05 performing so well last year, it is therefore hardly surprising to see rivals willing to follow Mercedes’ design philosophy. Ferrari is no exception, and the Y-shaped conjoined lower wishbone seen on the SF15-T is testament to the German squad’s influence. Nevertheless, Ferrari’s interpretation of the concept remains a mild attempt compared to the Silver Arrows’ original assembly (see top left corner on the first images). 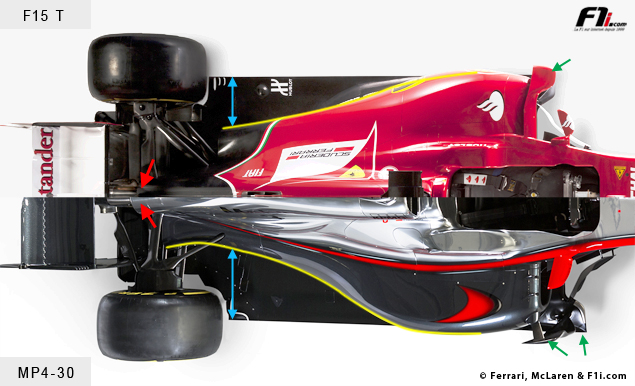 KEEPING IT COOL AT THE BACK

The rear of the latest Maranello-born challenger bears many resemblances to the preceding F14-T, namely that it still features a flowing design. Unlike Lotus, Ferrari’s airbox is not complemented with side gills, but it does come with another inlet, which is bigger than last year, right underneath the main air intake. There is also a dented edge on the SF15-T’s engine cover, something that already appeared on its predecessor. But it’s really under the bodywork that the most important changes have occurred, especially on the cooling system.

“The back of the car is something that I think is noticeably different from the 2014 [design], where we have been successful in pulling the bodywork much tighter to all the stuff underneath the skin,” explained Allison. “That's been done through a lot of work, not just in the wind tunnel, but also in trying to find radiator designs that were fundamentally more efficient so that, for every square centimetre of radiator, we were able to extract more cooling this year than last, [and] we were able to close the car down at the back as a consequence.”

Yet, the SF15-T’s sidepods remain definitely more bulky than on the McLaren, whose slender ‘waist’ has become something of a Woking trademark. 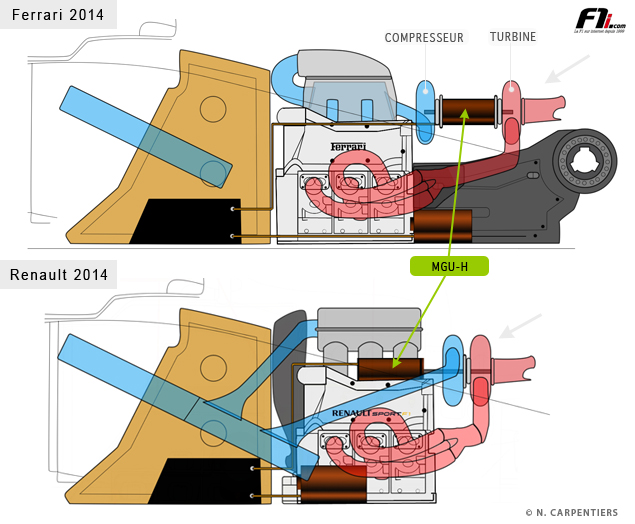 Already suffering from a flawed chassis, the F14 T even added insult to injury last year with a mediocre power unit, an area in which the late Enzo Ferrari was proud to see his company excel. The Italian turbo-charged V6 lacked raw power, was unsophisticated, and featured a very ineffective MGU-H (the system that harvests energy at the exhaust).

“A definite weakness of last year's car was that the amount of electrical energy we were able to recover from the turbo was not really good enough for producing competitive power levels during the race,” admitted Allison.

"It was one of the reasons Ferrari's qualifying performance was relatively stronger than race performance last year.

"We have tried to change the architecture of the engine to make it a better compromise between qualifying and racing performance."

What does the new engine architecture look like then? As shown below, the MGU-H was installed at the back of the 2014 power unit, in between the compressor and the turbine. According to several sources, both elements are now adjacent, albeit still at the rear, while the MGU-H sits inside the V-shaped hollow that is formed by the two banks of cylinders. Renault actually has the same design on their own PU. This would imply a major revamp of the radiator that currently occupies the space in between cylinders, but several Ferrari promotional videos apparently hint at such overhaul. 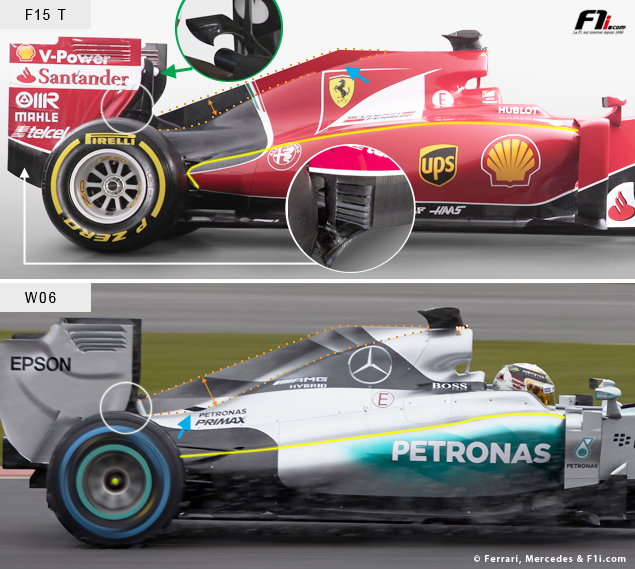 A QUITE UNIQUE REAR WING

The car’s rear wing is supported by a swan-neck central pylon, off which has been fixed a ‘monkey seat’ winglet. This extra element, which is located above the exhaust, aims at reducing airflow blockage.

Along with traditional vertical slots, Ferrari has also added horizontal holes at the base of the rear wing’s endplates. This unique feature should help expand the airflow behind the rear wheels in order to reduce drag and improve the efficiency of the diffuser. The latter was actually hidden on the images but it does widen a lot, like on the Red Bull, to extract the maximum amount of air from beneath the car.

While not visually groundbreaking (never judge a book by its cover though), the SF15-T looks like a clean evolution of its troubled predecessor. After undergoing a major overhaul in both the managerial and technical departments over the winter, this prudent consolidation approach could pay dividends, at least initially. However, it remains to be seen whether Ferrari can actually reach the two-win target they’ve set for 2015. 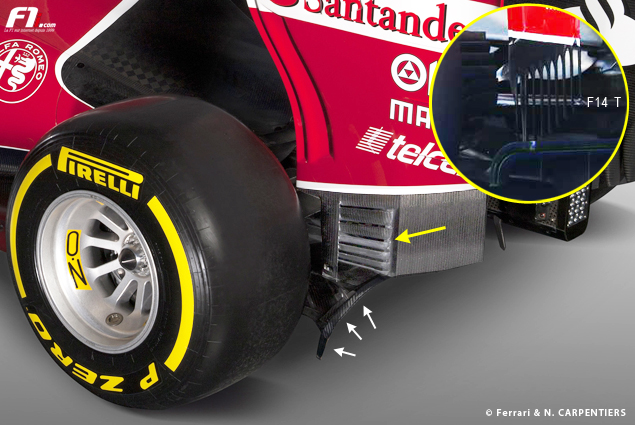 Haas: “We’ll be ready in time”