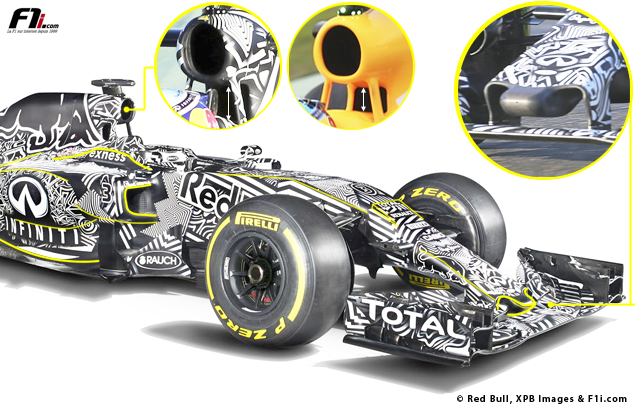 By claiming three wins last year, Red Bull was the only team to make a dent in the Mercedes hegemony, although all these victories came after the Silver Arrows hit trouble. What’s more, the Williams FW36 was actually a better all-round car than the RB10 per se, mainly thanks to its Mercedes V6. While the Red Bull’s weak spot rather lay in its Renault power unit, chief technical director Adrian Newey and his team have still poured a lot of efforts in designing the 2015 chassis to catch up with Brackley’s shooting stars. Depending on the circuit, last year’s deficit oscillated between 0.6s and 1s.

In what has become something of a Red Bull trademark, the Milton Keynes-based team delayed the building of its new challenger as late as possible so that the design phase could be further extended. The RB11’s monocoque only arrived at the factory for assembly on Monday 26 January before satisfying the mandatory FIA crash-tests two days later. Red Bull then hastily built the car and managed to ship it to Spain in time for the opening day of pre-season testing in Jerez on Sunday 1 February. In its first race (against the clock) of 2015, the RB11 thus managed to pull off a win.

Despite sporting a black-and-white, camouflaged livery, it’s still possible to see that the car’s nose features an original design, similar to the Williams albeit more rectangular and shaped like a horse’s hoof. Indeed, this year’s technical regulations have set mandatory surfaces – but no specific dimensions – for the three cross-sections of the nose cone, which leaves a bit of leeway for the engineers and designers. Chief engineering officer Rob Marshall revealed that alternative design solutions had been prepared in case the car had failed the crash-test. Its nose extends into a thumb-like tip that joins the profiled front wing mounting pillars, which makes for a complex assembly designed to better direct the airflow. 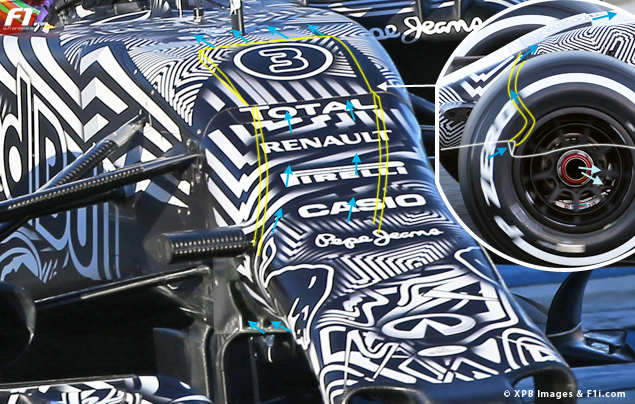 Like previous Newey Red Bull brainchildren, the RB11 has kept an S-duct. Under the nose, there is a small inlet on both the right and left ends. These openings capture the air and direct it through an S-shaped duct that goes upward and exits at the top of the nose, a system that aims at minimising airflow disruption over and under the nose.

The RB11’s blown front axles also play a major part in the car’s aerodynamics. Front axles are usually hollow and closed off around the wheel nut with a point end to speed up the engagement of wheel guns at pit stops. However, Red Bull (as well as Ferrari and McLaren) has decided to leave the front axles open in order to vent air passing through oversized brake ducts. The latter capture the airflow and use it to cool the carbon discs as well as for aerodynamic purposes. Functioning in association with the front wing, the air circulating via the blown front axle helps create a low-pressure zone outside the wheel, which subsequently keeps the ‘dirty air’ away from the rear of the car. 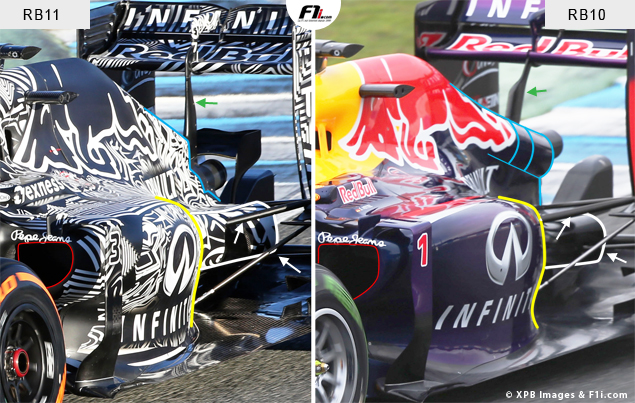 Having to cope with high cooling demands on the Renault V6, last year’s RB10 featured a couple of huge air to air intercoolers in its sidepods, which increased airflow blockage and in turn affected the car’s aerodynamics. Newey recently declared at a press conference that the French power unit’s thermal requirements had not changed for 2015. Therefore, both the radiators and sidepods have been redesigned, as explained by Marshall:

“We have upgraded the aero package and came up with a slightly different concept in terms of cooling that should benefit the rear of the car,” the new chief engineering officer explains. “The radiators are quite different after their shape, installation and ducts were all revamped.”

As shown on the image above, the car’s sidepods are slightly more flat and less twisted (see yellow lines), while hot air now vents through the larger sidepod outlets (see white lines) instead of via the round edge on the engine cover (see blue lines).

It’s also worth noting that the rear wing’s central support pillar blends into the new design. What’s more, the ‘monkey seat’ winglet does not appear on the picture above whereas the RB10 would almost always sport the element. In order to further improve cooling, the opening located under the main airbox is now bigger and has been brought forward compared to last year’s design. 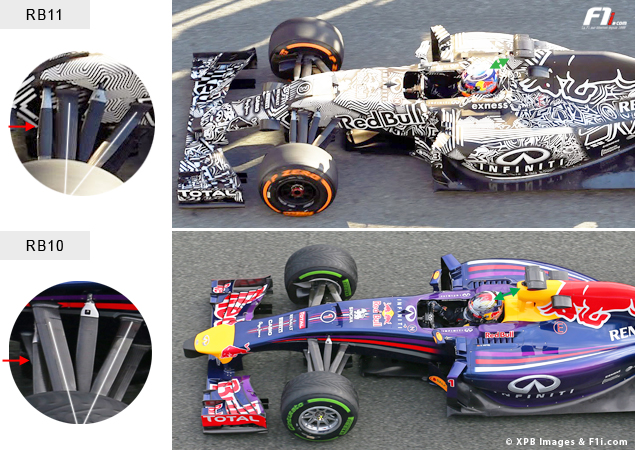 A LITTLE INSPIRATION FROM MERCEDES?

Another couple of tweaks can be spotted on the RB11. First, the front suspension design has evolved. The steering tie rods are now thicker and level with the upper wishbone arm, which has been significantly pushed backward (see comparison above). This has probably been done to fit the new, more conventional installation of the camera pods.

At the rear of the car, the transmission’s kept its unique high-and-narrow shape, whereas the edges of the diffuser are no longer rounded but squarer, like on the Mercedes. Of course, the RB11 launched in Jerez is only a first version that will receive further updates by the opening round in Melbourne on March 15.

Riding Newey’s latest (last?) genuine Red Bull, will the four-time world champions (2010-2013) manage to hit the bull’s eye faster than the Silver Arrows? This will come down to the improvements of its Renault power unit, as well as the proficiency of the strengthened partnership between Viry and Milton Keynes now that Red Bull is pretty much a works team for the French engine manufacturer. 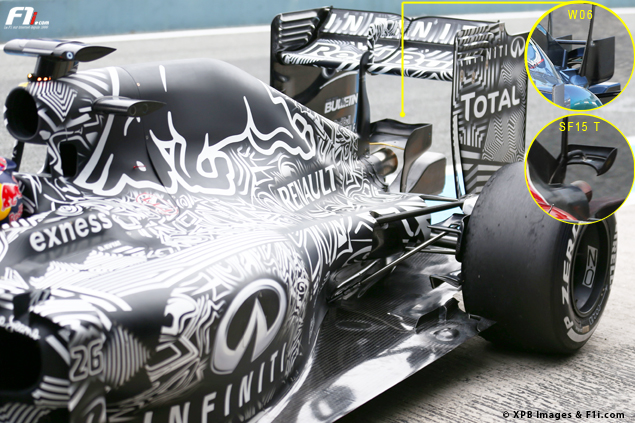 No place in the playground for minnows Manor