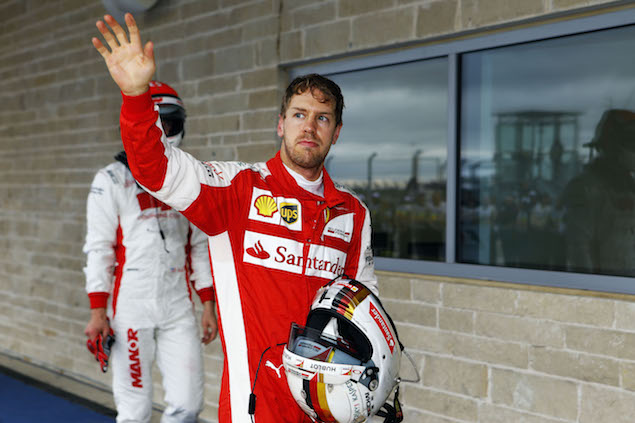 Sebastian Vettel: “We tried to spoil Lewis’ party today! In the end maybe I should have taken more of a risk with Nico, but it was not possible. It is a shame, but let’s not forget where we started this year. Today it was another great race, a great recovery and the car was fantastic. I think you can’t ask for more if you start from P13. A good first lap helped a lot and after that we had the pace, especially changing to the dry tires in mixed conditions. We seemed to fly for a few laps, a couple of seconds quicker than everybody else. Maybe without the last safety car we could have won the race: but if ‘ifs’ and ‘buts’ were candy and nuts… It was a difficult race and we managed it very well. I can only say “grazie tante” to everybody on track and in the factory. So on one hand we are happy, but it is not a nice feeling when you are out of the fight. For the next year this gives us a boost, trying to do make progress. Hopefully we will give them a bigger challenge.”

Kimi Raikkonen: “The first part of the race was more or less ok: the car felt pretty good all the time, I had the speed and I was able to fight with other cars. After the tires change I made a mistake, I pushed a bit too much, the rear end got loose, so I went off and hit the wall. The front of the car got stuck on the advertising board, I kept turning the wheels for a while, then I managed to get off and go back on the track. I had a slow puncture on my rear left tire, and I also damaged the right front end: we changed the front wing and the car was ok, but the brake duct had failed and the brakes got overheated, so I had to retire. It’s not very nice when you have a race ending like this: we have the right tools but we have to put things together, make no mistakes and achieve a proper result. Congratulations to Lewis and the whole team, he did the best job out of everybody and deserves to be the champion.”

Maurizio Arrivabene: “Today we have seen how strong the team has been all weekend, being capable of reacting so well, notwithstanding the postponing of the qualifying session and knowing that we would have to take a penalty anyway. Seb did another fantastic race, taking a podium finish after starting from P13 on the grid. This result helped us secure second place in the Constructors’ championship! We had a very good strategy today, gambling on the Prime tires to go all the way to the end when the Safety Car came out on lap 27; then we had another caution period and we fitted the Options. Before that second Safety Car period, we had hoped for an even better result, but the Safety Car is part of the game. As for Kimi, I appreciated to see him fight to make it back to the track after hitting the barrier: this fully shows our team spirit. Now the championship goes on, and we need to stay focused with humility and determination, trying to consolidate our position in the Drivers’ Championship. Congratulations to Lewis for winning the title.”