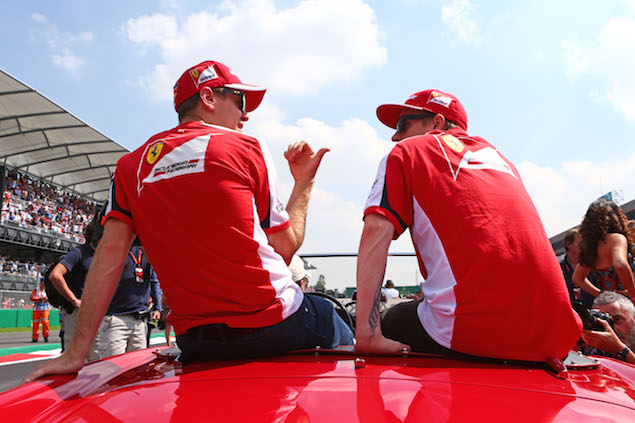 Sebastian Vettel: “Today I had a bad start, and obviously after the contact with Daniel I was very angry, but in the end I think no one is to blame. He clearly could not avoid hitting me being too fast for the line he had chosen, but these things happen. That’s racing, even if of course it’s painful if it happens in the first corner and you have to drive all the way back. So the race was pretty much lost at that time. I was hoping for a safety car earlier on, but it didn’t happen. I tried to catch up, but the two mistakes didn’t help. The last one obviously ended my race and I am not proud of it. The car in general was good, we were quick, the pace was promising and we were very close to Mercedes, probably we hadn’t been that close for a while. I tried everything to force it and come back. And trying too hard is probably the right explanation for my mistake.”

Kimi Raikkonen:“About the accident with Bottas, there are always two different ways to look at things, everybody can have their own view, but to be honest I did not expect a much different end result. It’s racing in the end, but I think I was expecting that it probably might happen after Russia. Has he done it on purpose? I don’t know, you can decide yourselves, it doesn’t change the final outcome right now and it’s not going to change anything for me for the future. Obviously we had a pretty poor weekend, we were a bit unlucky on many things, and it’s not the nicest feeling for all of us, but we are still a strong team. It was an unlucky situation for both me and Sebastian, but that’s how it goes sometimes. As a team, we haven’t lost anything, we just had a pretty difficult weekend and I’m sure we can be back in the next two races, trying to finish the season strongly.”

Maurizio Arrivabene, team principal: “Over the course of this season we had already managed to touch the sky. This time we reached the bottom. But today’s race was a lesson of humility that we must put to good use and that will further bind the team together and strengthen the character of everybody. I had already seen yesterday how this team can react to difficulties, having had to replace both engine and gearbox in so little time. Today, we are not blaming anybody: we are a team, we win and lose together. I regret the result as we had a really good pace in the race, but that’s racing, you can always have a bad day. This does not change our targets for the season, as Seb can still catch Rosberg in the point standings and Kimi can do the same with Bottas”.

AS IT HAPPENED: Mexican Grand Prix