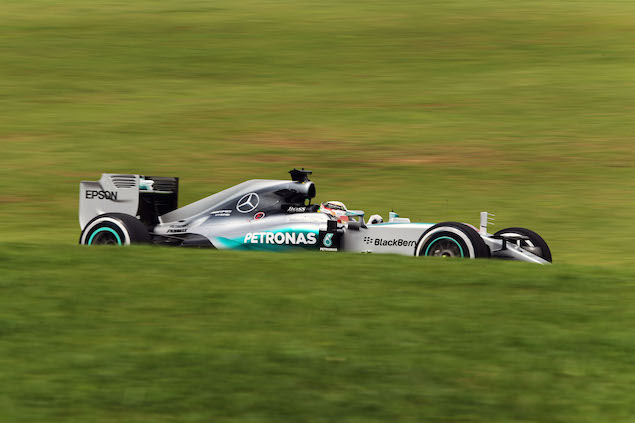 Nico Rosberg: “It was a good day, as we were able to test a few new things in the first session. Times in the afternoon were not showing the real picture, as Lewis drove in different engine modes to me. He was also very quick today and it looks like we will have a great battle again this weekend. Besides this, we also had to learn the track because there are some quite major changes with the new kerbs. It´s always great to be back on this fantastic circuit. The atmosphere is great, there's so much history and the fans are very enthusiastic. I have great memories from last year, when I was able to win here for the first time. So I very much look forward to qualifying and the race.”

Lewis Hamilton: “The car feels good here - but I think it's going to be a close, hard-fought weekend. Last year in the race I had really good pace - but it's hard trying to find the right balance that works in Qualifying and the race. I really need to improve my grid position this time because that can heavily influence the race. It's a short lap, it's hot and humid here and the track is also hard on the tyres. But they're working well and the grip is good. There is a bit of degradation but not as much as usual, so its generally feeling very good out there. They've changed the kerbs quite a bit. Before we could abuse them a little bit more but now you need to go around them, which I think is a good thing! It's an honour to wear Ayrton's colours on my helmet this weekend and to get a win would be extra special.”

Paddy Lowe, Executive Director (Technical): “A good start to the weekend here at Interlagos. It was great to have warm and dry running through both Friday sessions for the first time since Singapore! We ran through a regular Friday programme very smoothly, with a few test items during P1 and a first look at the prime tyre on low fuel. In P2 we ran our regular programme evaluating Prime and Option on low and high fuel. Both drivers are generally happy with the car and appear to be very evenly matched once more in terms of both outright pace and on the long runs. We'll now prepare for qualifying and hope to carry today's performance through the rest of the weekend.”