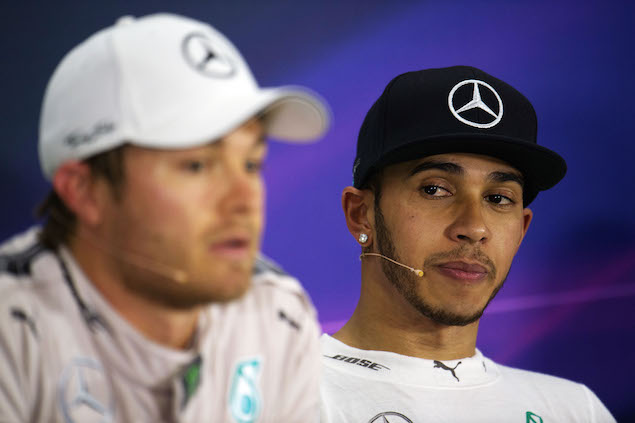 LH: "I wasn’t controlling [Rosberg's] race, I was controlling my own race but, great race, I’m really happy..."

Q: Nico, can you talk us through your view of the race today. Started second, finished second but you sounded at times as though you felt at timed under a little bit of unnecessary pressure maybe?

NR: "No. It’s just now interesting to hear from you, Lewis, that you were just thinking about yourself with the pace in front, and necessarily that was compromising my race. Driving slower than was maybe necessary at the beginning of stints meant that Sebastian was very close to me and that opened up the opportunity for Sebastian to try that early pitstop to try and jump me. And then I had to cover him. So, first of all it was unnecessarily close with Sebastian as a result, and also it cost me a lot of race time as a result because I had to cover him and then my tyres died at the end of the race because my stint was just so much longer. So I’m unhappy about that, of course, today. Other than that, not much to say."

LH: "Not really! My job is not to… it’s not my job to look after Nico’s race. My job’s to manage the car and bring the car home as healthy and as fast as possible – and that’s what I did. I didn’t do anything intentionally to slow any of the cars up. I just was focussing on myself. If Nico wanted to get by he could have tried but he didn’t."

"I think it’s a clearly ridiculous provocative statement. Our wind tunnels are anything but dinosaurs. Just because a technology has been around for a while doesn’t mean that it joins those reptiles of old. Cars have been around for a long while. Are cars dinosaur technology? Maybe Bob ought to come and have a look at a decent wind tunnel and just see how technically advanced they are."