In part two of our regular series, Eric Silbermann visits the Force India factory at Silverstone to find out just what happens within an F1 team during the off-season 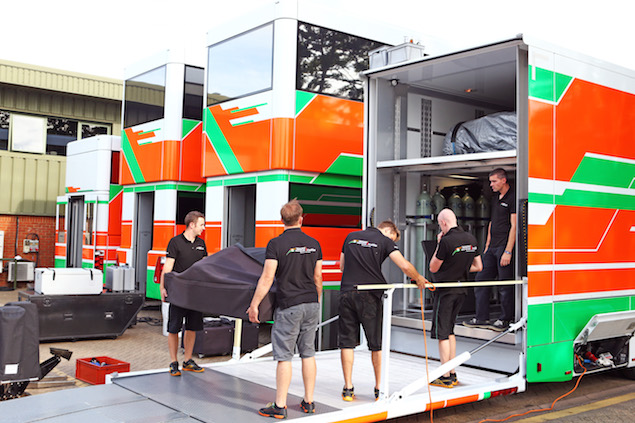 To the left of the front door at the Force India factory is a plaque in memory of Bosco Quinn. Bosco had worked for Eddie Jordan since 1983 and in 1992, he was killed in a road accident just a couple of days before the Irish team moved into its new home here, having made the short trip from a smaller place across the road in the grounds of Silverstone circuit itself.

There are plenty more reminders of the Jordan days here and one of them is Franco Massaro, Force India’s Race Team Coordinator, who has been working at the Silverstone facility for the past thirteen years. He started out as commercial mechanic and got into motorsport through “a stroke of luck” and eventually ended up at the Silverstone facility, from its Jordan days onwards.

January is one of the busiest times of the year for an F1 logistics person, but Massaro finds time to run through his current job list for us.

“Specifically at the moment, I’m just starting to work on the tests, sorting out the staffing for my side of the operation, the garage technicians and planning the truck movements for it, the hiring of relief drivers, who will drive the trucks down to Spain and back,” Massaro says. 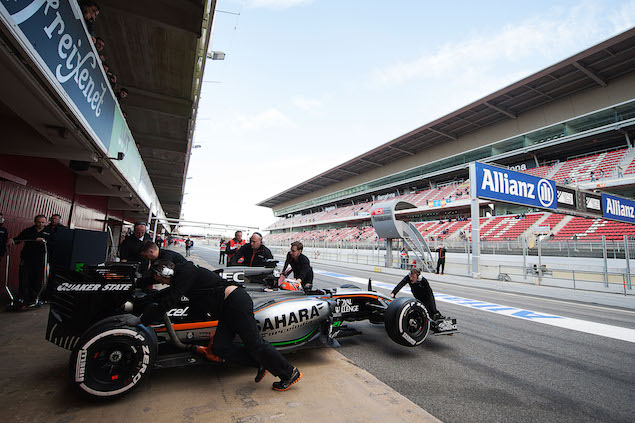 With the first race just two months away, Franco has to plan much further ahead than February testing.

“Australia will start emailing soon and we start ordering items from them and organising things for the circuit there,” he continues, although presumably he doesn’t mean the whole of Australia starts emailing. “With some circuits, two or three emails and everything’s ordered and done, but Australia tends to be one of the more complicated ones, as their Health and Safety people get involved. For example, you have to supply your guys’ forklift driving licences and you have to book time slots for them to have their test once they’re over there. Someone comes along and he watches you unload a few boxes and re-stack them.”

I may have missed some of what Franco said next – hi-viz vests, safety shoes – as I was still trying to grasp the idea of experienced F1 truckies having to prove they can drive a forklift!

Apart from moving the actual personnel around, there are three types of equipment that a team has to deal with: for the flyaway races outside Europe, therefore the ones without trucks or motorhomes, much of the furniture and office equipment is hired from the race organisers, who can charge frightening amounts for a simple plastic chair, it being a seller’s market. Also for flyaways, teams send plenty of equipment by sea freight and, as we speak the first Force India consignment is already on the high seas heading for Melbourne.

We’ve got five sets of sea freight. It tends to be all equipment that’s non-car-related, not too expensive.

“The next consignment will go to Bahrain and that leaves a week later,” continues Franco. “We’ve got five sets of sea freight. It tends to be all equipment that’s non-car-related, not too expensive. It’s cables, shelving, garage framework. It’s bits to set up the garage structure; items that are heavy and not necessarily too expensive, so that it makes sense to to have bought five sets of them.”

The load heading to Australia will then head off for F1’s June appointment in Canada and at some point, they will all return to base to be restocked for the second part of the year.

The final part of the transport jigsaw for the flyaways is the air freight, which is a huge cost compared to sending material by sea. But it’s the only way to get your cars to the races on time. 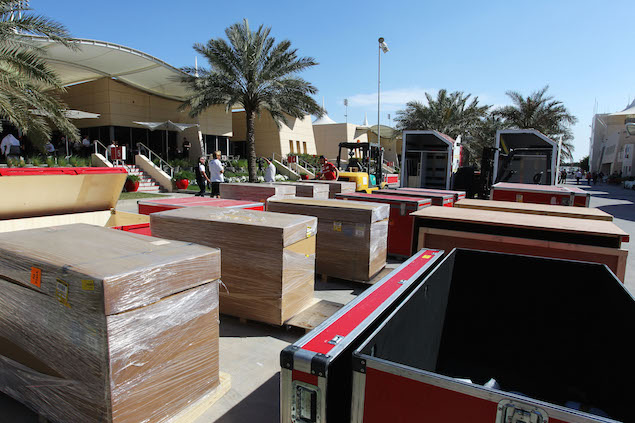 “At this time of year, I’m looking at replacing some of our air freight pallet cases, while others need repairs,” says Franco. “Once we come back from the testing, everything will be ready here and we’ll pack from the European trucks that we use for the winter testing straight into the air freight system. It’s a busy week to unpack and get everything turned around and repacked for Australia.”

For the UK teams, everything flies out of East Midlands Airport, near Donington Park circuit, so it’s not too long a road trip for the Force India crew.

“It’s always nice to get the first race out of the way,” claims Franco. “On the last of the tests, we do quite a good check down of all the equipment. We set the garage up as we would do at a race and we will try and test all the equipment that we’ve got so that when we go to Australia, we’re pretty confident that everything’s working as it should be equipment-wise. It’s a case of people getting back into a routine of packing everything they need to be packing.”

When the 2016 calendar was unveiled, there was a sharp intake of breath at the thought of no fewer than six sets of back-to-back (one week apart) races. Actually getting the cars from the first part to the second is not too difficult, by truck in Europe and with FOM taking care of the long-haul transport. 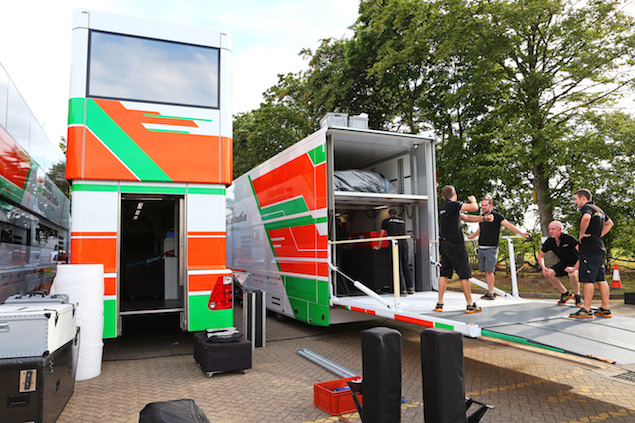 “But setting up at the track is hard work,” admits Franco. “For example this year we’ve got Austria followed a weekend later by the British Grand Prix here at Silverstone,” says Franco. “It’s a fair distance to travel so you’re on a bit of a back-foot when you arrive, to then start setting up all over again. We normally call on a couple of extra factory staff to get to the second venue ahead of the team, to start with the set up work on the garages.

“And this year, we will be going directly from Canada to Azerbaijan for the first time. You’re going the wrong way in time, to a temporary paddock much like Monaco. It’s going to be an interesting race there. I think it will all be good, but it will be challenging coming after what I imagine will be around a 12 hour flight from Canada, which with the time difference means you are looking at maybe 22 hours door-to-door. But we don’t expect anyone to get off a long-haul flight and go straight to work.”

Massaro makes it all sound positively straightforward, even if no other “industry” would countenance this sort of schedule. However, with logistics, as with every other aspect of Formula 1, you just know it’s going to get done.