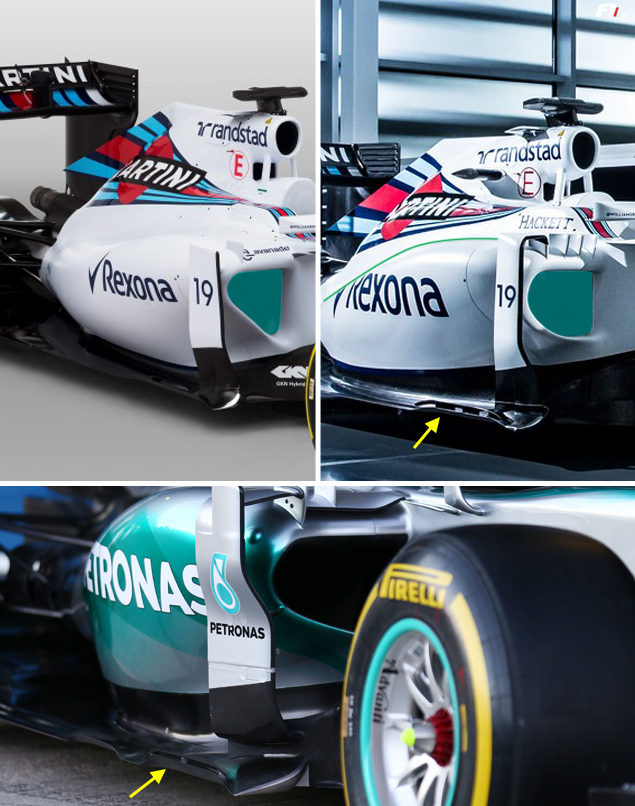 The new sidepods break away from last year’s design to sport an outline that bends more downward as they descend towards the car’s floor. The rationale behind the revised layout is to use the downwash effect in order to energise the air flowing on the sidepods. This will in turn create an air layer along the diffuser and enclose its edges to fend off the tyre squirt phenomenon (the dirty wake coming off the rotating wheels). One of the unwanted consequences of tyre squirt is a turbulent, low-energy airflow entering the diffuser and hampering its work. The three small aero fins, which sit atop the air inlets, also contribute towards keeping the airflow attached.

Given the expected improvements on the latest Mercedes power unit in terms of cooling, the Williams sidepods look generally thinner, while the coolers inside of them have probably also been revamped to suit the revised layout.

The inlets used to be triangular; they now have a more oval shape, a design that draws some inspiration from the 2015 championship-winning Mercedes W06. These new-look apertures have enabled Williams engineers to free up more space in the sidepods, which in turn accelerates the airflow towards the rear of the car. In order to channel this airflow and protect it from the dirty wake coming off the rotating front wheels, a thin deflector has been attached to the FW38’s floor, again in a manner similar to last year’s all-conquering Mercedes (see yellow arrows).