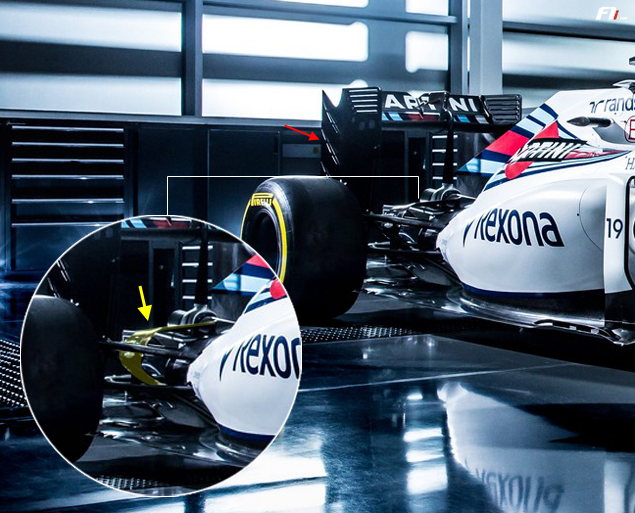 DRAWING A LOT OF INSPIRATION FROM MERCEDES, A LITTLE FROM McLAREN

Looking at the back of the FW38, in the area of the suspension wishbones, one can spot a hooped piece of bodywork (outlined in yellow). The 2015 Silver Arrow also featured a similar element, though its size gradually decreased over the season. The Williams setup has bigger dimensions and its sloping outline seems to indicate that it works in conjunction with the slimmer sidepods but also the engine cover, which slightly lowers in the area of the Martini logo.

One of the main changes in the 2016 technical regulations is the revised exhaust setup, which was devised with an eye towards increasing the noise of the muffled-sound 1.6-litre V6-turbocharged power units. 2015 F1 cars only had one exhaust tailpipe but their successors have to be fitted with at least one extra pipe for the wastegate, with up to two additional pipes allowed.

As a result, the wastegate pipe(s) will no longer mute the sound of the turbine, a distinctive feature on any turbo engine. However, we will need to wait for better images of the FW38 to see which layout – two or three tailpipes – Symonds and his team have come up with. Last but not least, the rear wing’s endplates feature serrated strikes, a saw-tooth detail that was already present on last year’s McLaren MP4-30.

Williams enjoyed a refreshing recovery two years ago, but the revered British outfit somehow stagnated in 2015 though it still managed to secure third in the Constructors’ championship. Williams hopes the FW38, an enhanced version of its predecessor, will propel it to another top-three finish in the final standings. But with Red Bull and McLaren tipped to recover in 2016, and Force India looking very frisky in the closing stages of the last campaign, the feat will not be easy.

To complete its mission, the new Williams will need to perform better in wet-weather conditions and exploit its tyres more consistently. Considering the fact that the team’s early focus on the FW38 was detrimental to the FW37, expectations resting on Grove’s latest F1 challenger are undeniably high.