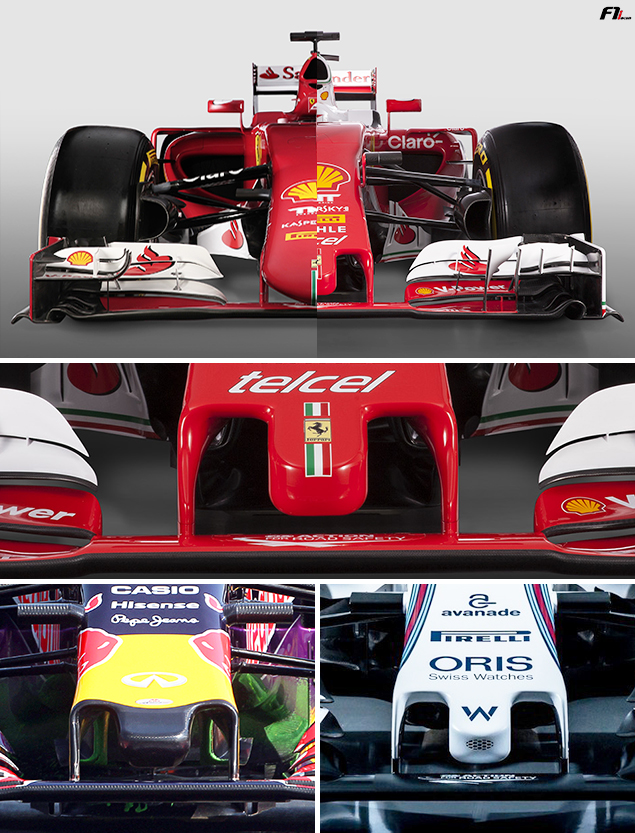 CLEARING UP THE UNDER-NOSE AREA

The new SF16-H sports a shorter nose that extends into a thumb tip, a design similar to Williams and Red Bull, and that breaks away from last year’s trademark long nose. The rationale behind the revamped layout is to better control the under-nose airflow, which comes about in two ways.

First, the new design opens up a bigger passage for the frontal airflow. Thanks to the protruding tip, engineers at Ferrari could shorten and raise the nosecone, which limits airflow obstruction in between the front wing mounting pillars.

Secondly, the 2016 design helps better guide this entering airflow: the tip extends under the nose into a thinner edge (see white arrow) that works in conjunction with the pillars. These are neatly twisted and sculpted as on last year’s McLaren and Red Bull: a change in philosophy that has had consequences on other areas of the car. We can for instance notice that the splitter and bat-wing that appeared late in 2015 do not feature on the launch car.

Just like the Williams FW38, there is a vanity panel at the joint section of the nosecone and chassis (orange-coloured on the lower picture below), which could eventually house an ‘S’-duct. The system would also further optimise the under-nose airflow as it limits the formation of a slow layer of air - called ‘boundary layer’ - that creates turbulence.