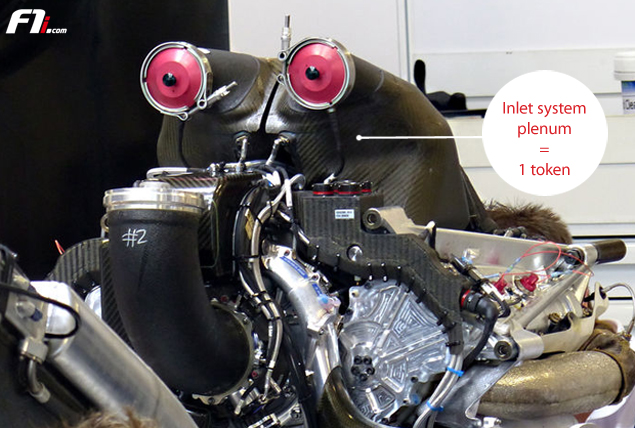 “Why simplify things when you can make it complex?” This sounds like a fitting motto to define Formula One as the pinnacle of motorsport often finds ways to come up with intricate and (unnecessarily) complicated regulations.

With last year’s power unit (PU) homologation date set to 28 February 2014, Mercedes, Renault, and Ferrari could not develop their hybrid turbo V6 engines during the season. Only exceptions were if the planned upgrades targeted reliability and/or safety improvement, or helped save costs.

Despite both Viry and Maranello bitterly complaining against what they perceive to be an unfair engine freeze, the new regulations have actually always allowed for power unit developments. These just needed to be brought in 2015, and this is why factories in France and Italy have been busily working all winter in order to close the gap to frontrunner Mercedes.

It was initially implied that all power unit suppliers once again would have to homologate their 2015-spec hybrid turbo V6s before the opening grand prix in Melbourne. However, Ferrari and Renault quickly pointed out that the latest Formula One technical regulations did not mention a specific date. Both challengers wasted little time in exploiting the loophole and had the FIA cave in to allow in-season development, with new Ferrari president Sergio Marchionne hailing the decision as a “first victory”.

This does not mean Ferrari et al will have carte blanche to improve their power units though. Indeed, they can only do so within a specific development frame set by the FIA. As winter testing nears, how much leeway do manufacturers actually have?

In an attempt to save costs while still allowing updates, the FIA has designed a token system whereby room for engine development will gradually decrease. Indeed, only a certain number of PU components can be modified every year, with the amount shrinking from one season to another.

Each individual component was ‘weighted’ between one and three, depending on their importance. For instance, both the compressor and turbine inside the turbocharger are worth two tokens, while the exhaust flanges going from the engine to the turbine inlet only weighs one. Similarly, tweaking the oil pump will cost you one token whereas modifying the timing belt requires three. The whole power unit is ultimately made up of 66 tokens.

However, five of these have been completely frozen ahead of 2015, and spread across the three following categories: the crankshaft (two tokens), the air valve system (one), and some aspects of the upper/lower crankcase, including cylinder bore spacing, deck height and bank stagger (two). This represents around 8 per cent of the entire hybrid turbo V6. 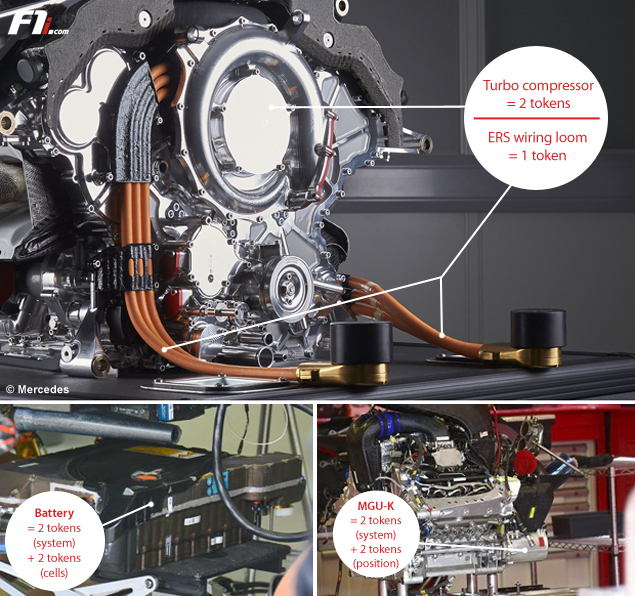 A game of two halves

All the other areas of the power unit can be tweaked, albeit in limited proportions. If 61 tokens are still potentially available to spend, official rules will restrict each engine supplier to 32 in 2015, namely around 48 per cent of the components. It is then up to Mercedes, Renault, and Ferrari to decide which parts of their power units they want to improve first and foremost. For instance, Renault and Ferrari could theoretically use their 32 allocated tokens in order to adopt the German behemoth’s design, which separates the compressor from the turbine, and monitor the effects of such a technology shift.

Looking from the opposite perspective, ‘frozen’ engine parts include the mandatory FIA restriction on three categories (five tokens or 8 per cent) as well as all the components left out of development by each PU supplier. Therefore, it will be quite interesting to see where Mercedes and co choose not to spend these remaining 29 tokens (approximately 44 per cent of the power unit).

As mentioned earlier, the number of usable tokens – namely the scope for each constructor to review their engine – is bound to decrease over the years. From 48 per cent in 2015, only 38 per cent of the power unit can be changed next season, dropping to 30 per cent in 2017, then 23 per cent, and finally a mere five per cent in 2019 and 2020.

If every engine supplier does enjoy some leeway entering the 2015 season, they are still restricted in how they can improve their power units. Challengers Renault and Ferrari have to play catch-up and will therefore spend their tokens accordingly, while Mercedes can focus on other areas in a bid to further enhance its already impressive hybrid turbo V6. What’s more, the three 2014 contenders still need to have their power units homologated before the season kicks off Down Under mid-March. Then, they can use what’s left of the 32-token allocation as they see fit in order to fine-tune their hybrid turbo V6s throughout the year.

The curious case of Honda

Newcomer Honda faced a very different situation ahead of 2015 as the Japanese manufacturer did not have yet to abide by the FIA token system and thus could push engine development as much as they wanted to. However, it was initially understood that Honda would have to homologate their power unit by 28 February 2015 and then race the same specification all year long, as per the existing manufacturers last year.

In other words, Honda and partner team McLaren would have not been able to benefit from the engine loophole and refine their turbo V6 during the season. The pair were quite aggrieved about the matter and quickly called for a meeting with the FIA to discuss power unit regulations. The consultation did yield positive results for Honda and McLaren as Formula One’s governing body eventually backtracked and allowed the Japanese manufacturer to develop their engine over the course of 2015.

As for the number of tokens Honda will be granted this year, the FIA came up with the following consensus:

“As each of the four 2015 manufacturers will have an homologated power unit at the start of the season, we believe it would be fair to ensure that each of them enjoys equal opportunities for upgrades during the season,” FIA Head of F1 Technical Department Charlie Whiting wrote in a letter sent to teams.

“We will therefore allow the new manufacturer [Honda] to use the same number of tokens that the other three [Mercedes, Ferrari, and Renault] have available to them, taken as an average of the three.”

Whiting then gave an example to illustrate a ruling that, in typical F1 fashion, looked clear as mud at first.

"If the three 2014 manufacturers have eight, seven and five unused tokens respectively at the start of the season, then [Honda] will be allowed to use six during the season (the average rounded down to the nearest whole number)".

How much does each PU component weigh?

See our previous feature for the detailed list of parts that are involved in the hybrid engine design along with the number of tokens each component is worth according to Appendix 4 of the 2015 Formula One technical regulations.

How much does each power unit component weigh?