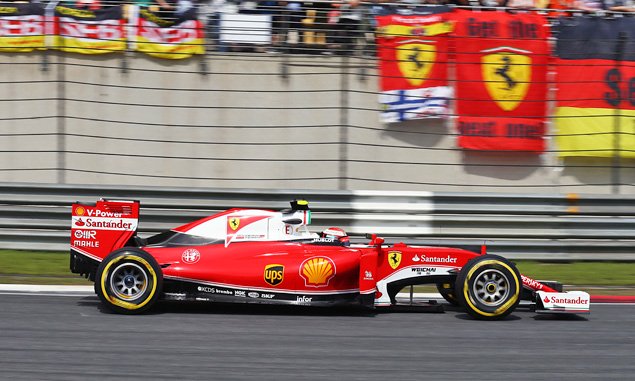 Sebastian Vettel - 2nd place
“What happened at the first lap, in the end, is a racing incident. From my side I didn’t really know where to go, I was sandwiched between Kimi and Daniil. Obviously I am terribly sorry for what has happened, I mean touching the car with the same colors is not right. It was a shame, because it destroyed both of our races, Kimi’s and mine. At the end of the day we’ve been lucky because we were still able to continue. The safety car helped us to sort of come back. Kimi locked up in turn one. I tried to go inside to pass him. Daniil was behind me. He had a better start and was lining up for the same move initially. I was determined to overtake Kimi. Daniil was determined to overtake me. Kimi came back from the left, Kvyat came from the back from the right and I was reacting to him. I tried to back out of it, going off throttle and hitting the brakes, but there was no way, so I had contact with Kimi which is a shame, the car was damaged after that, but obviously a great recovery by the Team, which managed to stay calm initially and then change the nose while the safety car was out. Overall we had great pace, good strategy, fantastic pit stops, I couldn’t have asked for more after this poor first lap. Hopefully in Russia we have a smoother race!”

Kimi Raikkonen - 5th place
“I have no idea of what happened at the start, I suddenly got hit and spun. I had a puncture in the left front tire and a front wing damage, but I managed to get back to the pits. Once I went back on track I found myself more or less in last position, the car felt a bit tricky, but I tried to do my best to charge thorugh the field. At the beginning I struggled a bit, but then I managed to recover some places. Obviously the fifth position is not ideal and not what we were looking for, but after what happened it’s not a disaster. Seb came to apologize to me afterwards and it’s obvious he didn’t run into me on purpose. Unfortunately this does not change things for the race but it’s only the third round of a long season…”