Nicolas Carpentiers compares the different versions of the Ferrari steering wheel, from the setup chosen by Sebastian Vettel to Kimi Raikkonen’s preferred options, and the bespoke Haas model. 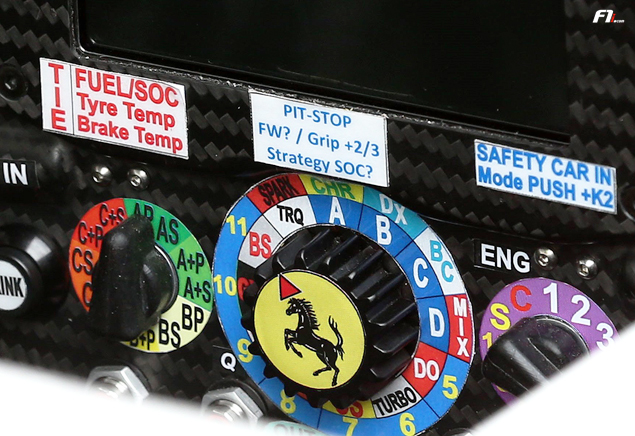 Long gone are the days when Formula One steering wheels were only used to… well… steer the car. We had a fascinating glimpse into this at this year’s European Grand Prix in Baku when Lewis Hamilton could not find, among the many dials, knobs, and screen menus, the right controls to select the correct engine mode.

These expensive pieces of engineering – the most sophisticated models cost around €40,000 (£33,700) – are like on-board computers, fitted with LCD screens that display all the valuable information drivers needs to operate the complex hybrid V6 turbocharged power units.

The first half of the season saw the FIA implement restrictions on radio messages (these were lifted at the German Grand Prix), with drivers pretty much left on their own to perform the appropriate procedures. Hence the reminders stuck on Sebastian Vettel’s  steering wheel in the cockpit of Margherita, the nickname chosen by the four-time world champion for his car this year (not that it has a speed dial button to order a pizza!).

The ‘cheat sheet’ on the left-hand side reminds Vettel to keep an eye on his fuel consumption (‘FUEL’), the state of charge of the battery (‘SOC’), as well as the tyre and brake temperatures (‘Tyre Temp’ and ‘Brake Temp’).

The middle sticker is for the pit stop procedure. The driver can communicate to his team how much he wants the front wing flaps to be raised – by two or three turns of wing (‘FW ? Grip +2/3’). He also has to make sure the right state of charge mode has been selected (‘Strategy SOC’).

The third reminder, on the right-hand side, is for the Safety Car procedure (‘SAFETY CAR IN Mode PUSH + K2’). Mercedes’ Nico Rosberg is also known to have placed a few reminders around his steering wheel. 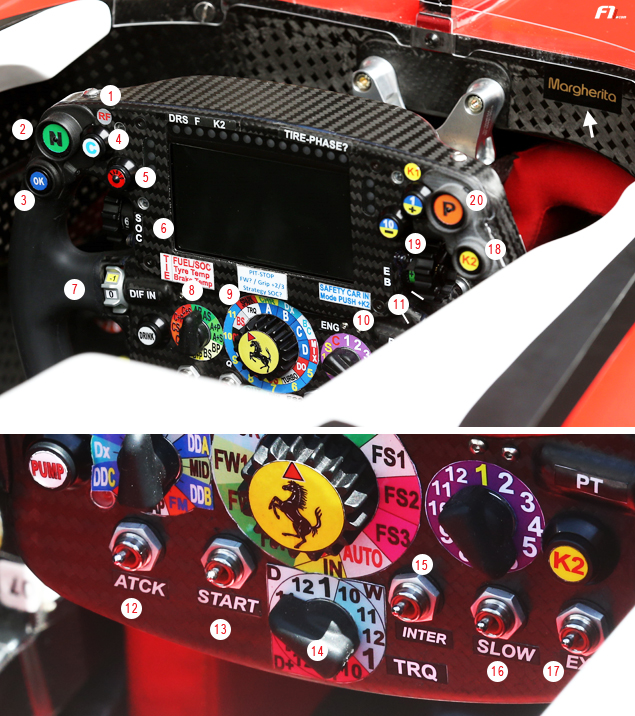 1 – RF (“Rear Flap”): activates the Drag Reduction Sytem (DRS); 2 – N: takes the car out of gear and puts it in neutral; 3 – OK: enables the driver to acknowledge a piece of information or an instruction given by the team without having to talk over the radio; 4 – C: quickly adapts the engine map; 5 – switches on the radio to talk with the race engineer; 6 – SOC (“State of charge”): manages the conditions of the battery pack in terms of charging and discharging; 7 – DIF IN: adjusts settings of the differential on corner entry; 8 – FUEL: adjusts the fuel mix; 9 – MF (“Multifunction”) : similar to a menu, selects various strategies linked to engine management, ERS, brake balance, etc.; 10 – SPARK: sets up engine mapping; 11 – BB (“Brake Balance”) : distributes the pressure between the front and the rear brakes; 12 – BO (“Burn Out”): gives a temporary boost; 13 – START: selects the torque map for the start and pit stop  ; 14 – TRQ (“Torque”): selects the best torque map for acceleration on corner exit; 15 – WET: adjust all the parameters to wet-weather conditions; 16 – SLOW (unknown function) ; 17 – this new switch has appeared in 2016 though its function remains unknown for the moment 18 – K1 and K2 : quick-change buttons linked to ERS use ; 19 – +1 / –10 : increases or lowers the value for the selected option on the multifunction rotary dial; 20 – P (for “Pit Limiter”) : keeps legal speed in the pit lane.