Eric Silbermann has never been a Grand Prix driver, but he’s picking up points on his license and revelling in this old skool venue here in Mexico City. 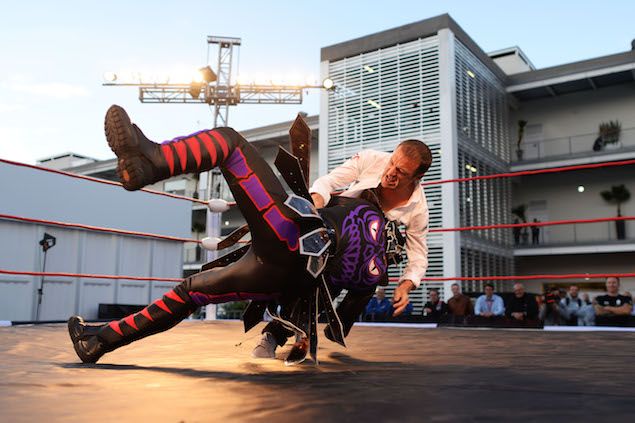 In the previous era of the Mexican Grand Prix you knew not to stop at red traffic lights, nor to pull over when waved down by dodgy looking policemen at the side of the road. In most cases, these guys had been sacked, but had kept the uniforms to relieve gullible tourists of their money.

These days, the situation is a bit better, but if you’re driving yourself around, make sure you have a wad of Pesos stuck inside your driving license wallet. The Dutch F1 TV crew were stopped yesterday morning for allegedly having crossed into a bus lane. They were pulled over into a dangerous looking side street and given an on-the-spot-fine. However, the officer then explained that as it was a rental car, it had to be impounded. At this point the quick thinking Dutch presenter suggested the officer should look at his driving license again, having slipped some money inside it. But this handing over of the license had to be repeated several times, as the officer’s sight apparently only began functioning normally once 4000 Pesos was clearly in view. Only then were they allowed to head on to the track. This is all part of the “charm” of Mexico City.

I also had a brush with the law on Wednesday, when driving from Austin to get my flight here from Houston. I tell you, if you’ve never had a humungous white pick-up truck suddenly pull up behind you and switch on all lights and sirens, it’s quite a scary experience. It was all I could do not to pee my pants for the first time since primary school. The officer couldn’t have been nicer, although I did notice he had one hand on his pistol holster when he asked me to get out of the car and “step away from the vehicle, Sir”. He welcomed me to Texas and sent me on my way. In an incredible synchronicity of misfortune, I was told that on the same day, I’d had a Fixed Penalty Notice back in the UK for a speeding offence. Not many people can claim that’s happened to them twice in one day on two different continents. 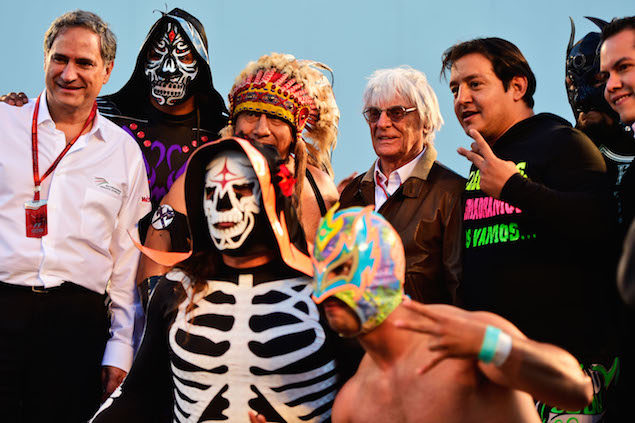 The topic of whether or not Bernie Ecclestone will stay on in F1, once its new masters impose their rule on the sport has been exercising the media quite a lot recently. My advice would be to keep him on as the sport’s official comedian. He could be the warm-up act for the end of race concerts: slagging off Nico Rosberg, suggesting building walls on the outside of corners and best of all, referencing Fernando Alonso’s horrific Melbourne crash, suggesting organisers could pretend a driver was dead and only later announce that he’s fine, “A bit of showbiz, people like that,” quipped the comedy king. People? His family back home one presumes.

No way was I driving on Thursday night, as I wanted to sample several Tequila slammers rather than end up in the slammer. The race organisers had put on a fantastic welcome party in the paddock, complete with Mariachi bands. I have to say this is not my music of choice and I couldn’t help be reminded of the lyrics to “In Old Mexico” by the inestimable Tom Lehrer.

The mariachis would serenade,
And they would not shut up till they were paid.
We ate, we drank, and we were merry,
And we got typhoid and dysentery.

You know what, the band wasn’t that bad, although I thought my ears might start bleeding when they launched into an out-of-tune version of Daft Punk’s classic “Get Lucky”. Before the revels began, Bernie got in the wrestling ring set up outside the Media Centre and mugged around with the exotic Mexican wrestlers who had clearly been told there’d be hell to pay if they injured him in any way – evidently the cash money transfer from Liberty Media to Mexico Wrestlers Inc. hadn’t gone through in time. 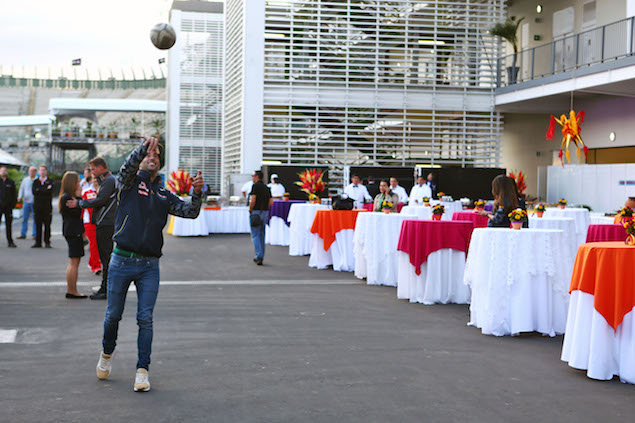 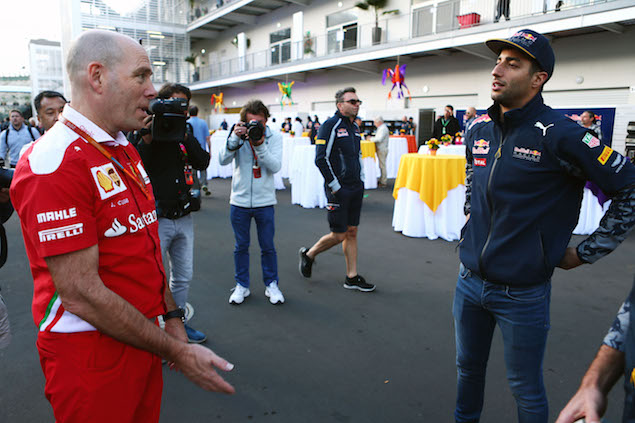 Wrestling is huge in Mexico and the participants are all well known stars, although they never remove their masks while in public. Volunteers were asked to try their luck against these very scary looking guys and one of their victims was the game-for-anything Johnny Herbert. The wrestlers got stuck in to the former F1 driver and for a while they seemed to be trying to finish off what Gregor Foitek had started at Brands Hatch in 1988. It was all done in a spirit of fun and, if the Autodromo Hermanos Rodriguez rose from the ashes of a time when Formula 1 was more of a laugh, it seems the paddock party captured some of that atmosphere last night, with people from various teams mingling and chatting. There was even the strange sight of Ferrari performance engineer Jock Clear throwing an oval ball around the paddock with Daniel Ricciardo. Mind you, the former probably thought he was playing Rugby, the latter, Aussie Rules Football.

Apart from the usual race programme and info documents, our Welcome Pack at the circuit yesterday included the obligatory Mexican Wrestler’s mask. One of my colleagues thought it would be great fun to put it on before calling up his toddler kids on a Skype video call and give them a bit of a scare. He was more than a little disappointed therefore when his four year old daughter answered the phone and, having raised her eyes skywards in a “whatever” sort of gesture, just said, “Hello Daddy, I’ll get Mummy for you.”