In the second chapter of his 2017 Formula 1 technical preview, Nicolas Carpentiers delves into the radical bodywork changes slated for introduction this year and studies their wide-ranging impact on aerodynamics. 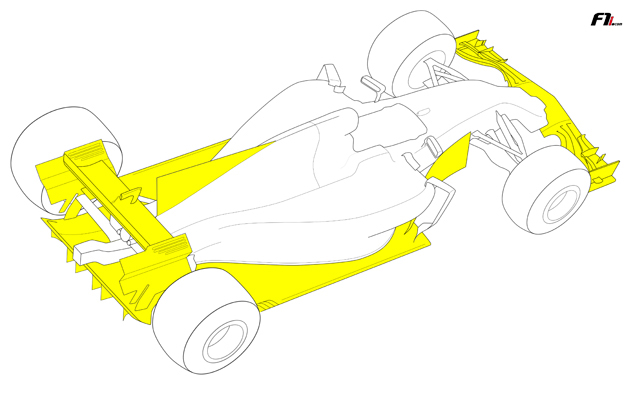 AN OVERHAUL IN DETAILS

For the first time in the long history of Formula 1, technical regulations have been drafted specifically with an eye towards making the cars faster, with expected lap time gains ranging from three to five seconds per lap depending on the circuit.

In broad terms, the chassis dimensions and bodywork parts that generate downforce have been increased. But merely designing bigger wings and a wider floor based around last year’s car will not suffice to get a 2017 challenger.

Speaking recently to F1i, Renault’s chassis technical director Nick Chester confirmed that F1 teams had to start over from scratch.

“So, it is an all-new problem. The concepts of what you are trying to achieve stay the same but you have got an all level of new gen to work with.”

The front wing span has gained 150mm, going from 1650mm to 1800mm, with the wing featuring a swept-back shape that results in angle of 12.5° between the tip of the wing and the endplates.

“It is more a visual change,” Chester continued. “Teams will still be trying to achieve the same with the front wing – how it works with the wake from the front tyre – but the swept back is not a huge difference.”

The nose has been extended by 200mm but still sits at the same height after successive modifications in that realm these past few years.

The leading edges of the sidepods are no longer straight but will have an oblique outline instead, this in a bid to increase the impression of speed.

The incidence of the suspension legs goes from +/-5° to +/-10°, thus making the wishbones even more aero-friendly. 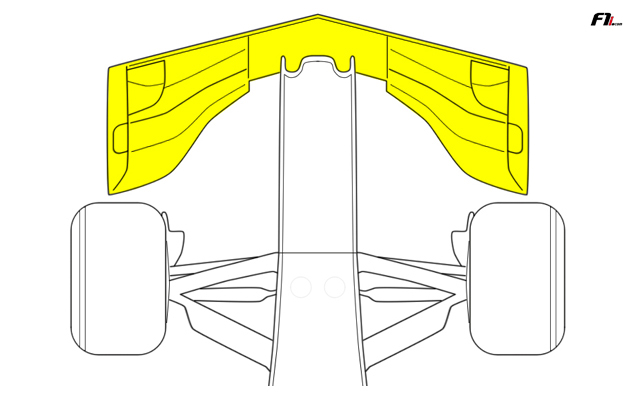 2017’s revised technical regulations also include a reduced exclusion zone, which allows for larger, longer, and higher bargeboards (per articles 3.8.9 and 3.10.1) that will drive out more of the front wheels’ turbulent wake and feed cleaner air underneath the car. In turn, this should increase downforce at the front of the underbody, below the sidepods.

While Mercedes came up with sophisticated, segmented and serrated bargeboards on its 2016 title-winning W07, new cars could sport even more complex designs in the area.

“The new regulations allow us to run a much larger bargeboard,” McLaren-Honda technical director Tim Goss recently told his team’s official website. “There’s much more freedom in that area – so you’ll probably see that every team has done a lot of detailed work in that area.

“In the 2016 regulations, the scope for bargeboard development was quite small. Now we can run them to the full height of the chassis, they can go a lot further forward and sit wider outboard.

“We can also stack devices within that area – so you’ll see a lot more complication in that area, a little like we saw in previous regulatory eras.”