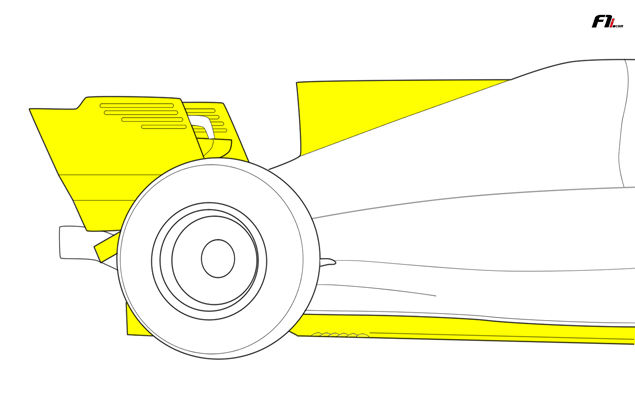 The floor dimensions will be expanded from a maximum width of 1400mm to 1600mm, with the minimum width also up from 1300mm to 1400mm. Meanwhile, the splitter has been pushed 100mm backwards so the length of the floor will depend on the wheelbase each team has gone for. Unsurprisingly, the track will stretch as well, from 1800mm last year to 2000mm, i.e. the same dimensions as in 1993-98.

This means the rear wing sits in an area more exposed to air turbulence, which could lead to the return of the shark fins that were all the rage in 2008-10 in order to better align the airflow towards the rear wing. It has been rumoured that Red Bull tried to ban these fin-shaped engine covers during a recent meeting of the World Motor Sport Council, but to no avail.

The ‘curved’ trend already noticed in the swept-back front wing and oblique leading edges of the sidepods is also visible on the rear wing endplates, which slope downwards at an angle of around 25°.

McLaren-Honda technical director Tim Goss: “The 2017 cars will look pretty similar to the layman, but the aero guys have been battling to correct flow-structures at different ride heights for months and months now”

This expansion will increase the vacuum produced underneath the car and such phenomenon will be reinforced by the greater interaction between the lowered rear wing and the diffuser.

It seems that the downforce coming from underneath the car, which is all the more valuable in that it does not generate any drag, will be even more important proportionally compared to the downforce produced by the rear wing. One shall bear in mind though that Pirelli’s wider tyres will trigger an increase in drag, which should affect how the floor and diffuser work.

As one can see, simply adding 200mm here and there to a 2016-spec car will not give you a new-gen machine. What might appear as dimension tweaking actually means radical changes in how the air flows around the car.

“The 2017 cars will look pretty similar to the layman, but the aero guys have been battling to correct flow-structures at different ride heights for months and months now,” Goss continued.

“We’ve had to rethink lots of different areas on the car, because they’re behaving differently to how they did before.”