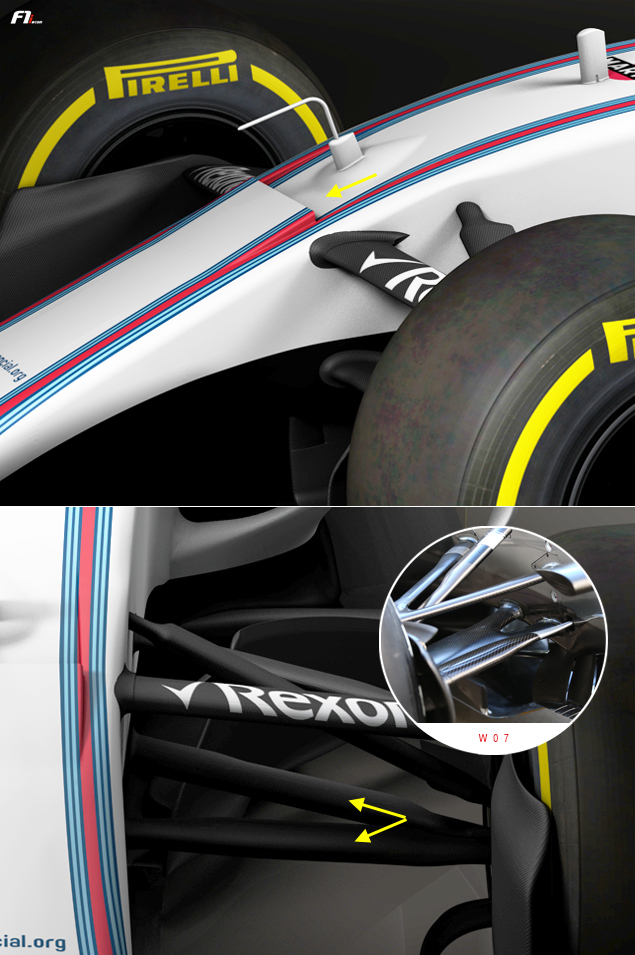 ADDING AN S-DUCT BUT KEEPING A CONVENTIONAL WISHBONE DESIGN

On the front end of the FW40 chassis, one can spot an S-duct system. Interestingly, Williams has never raced the concept so far.

As a reminder, the purpose of the S-duct is to speed and clean up the airflow under and over the nose, this in order to prevent as much as possible having slow air on the car’s nosecone, ahead of the driver.

The air is then spat out through an outlet. The latter is rounded on the FW40, same as on last year’s Force India VJM09, while it was hollowed out within the chassis on the Mercedes, McLaren, and Toro Rosso layouts. The mandated increase in nose length makes it more enticing to have an S-duct this year.

According to the rendering, the lower wishbone would retain its conventional ‘V’ shape. Once again, Williams engineers did not seem to have copied the conjoined wishbone approach made popular by Mercedes and adopted by the likes of Ferrari, Force India, and Toro Rosso.

In reducing drag and guiding the airflow efficiently, the conjoined design makes even more sense in 2017 given that the incidence of the suspension legs has gone from +/-5° to +/-10°, thus making the wishbones even more aero-friendly.