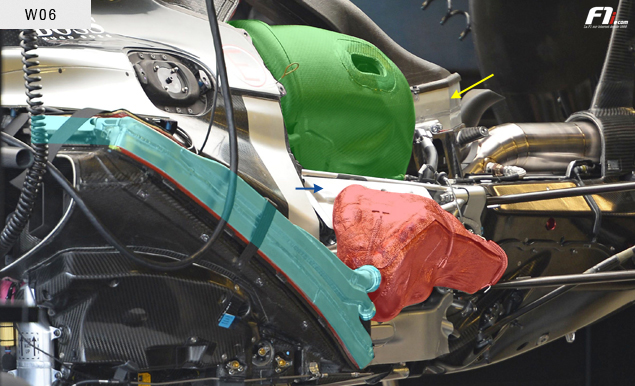 MERCEDES: THE THEORY OF EVOLUTION

While the sport’s technical regulations have remained pretty stable over the winter, V6 engine development is allowed (when V8s were totally frozen). Meanwhile, chassis engineers have been able to make bolder technical calls in an effort to unlock more performance, including the all-conquering Mercedes squad.

After all, Charles Darwin believed in the survival of the fittest and the most adaptable to change. And he knew a thing or two about evolution. 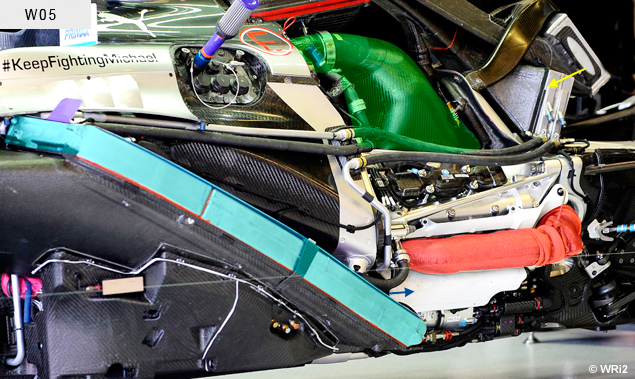 As shown on the two images above, Mercedes has dropped its trademark log manifold – a key feature on last year’s W05 – to go for a more traditional exhaust installation on its latest design (see both designs in red).

The insulating walls (see dark blue arrows) are back while the cooler’s shape (see blue outline) has not changed much either. However, the airbox, which feeds air to the engine, is significantly bulkier (see in green). This has probably been made with a view to housing the variable trumpets, as permitted by this year’s technical regulations.

One can notice the package’s overall neatness as well as the finely crafted electronic components, which can only hint at optimum integration on the W06 Hybrid.